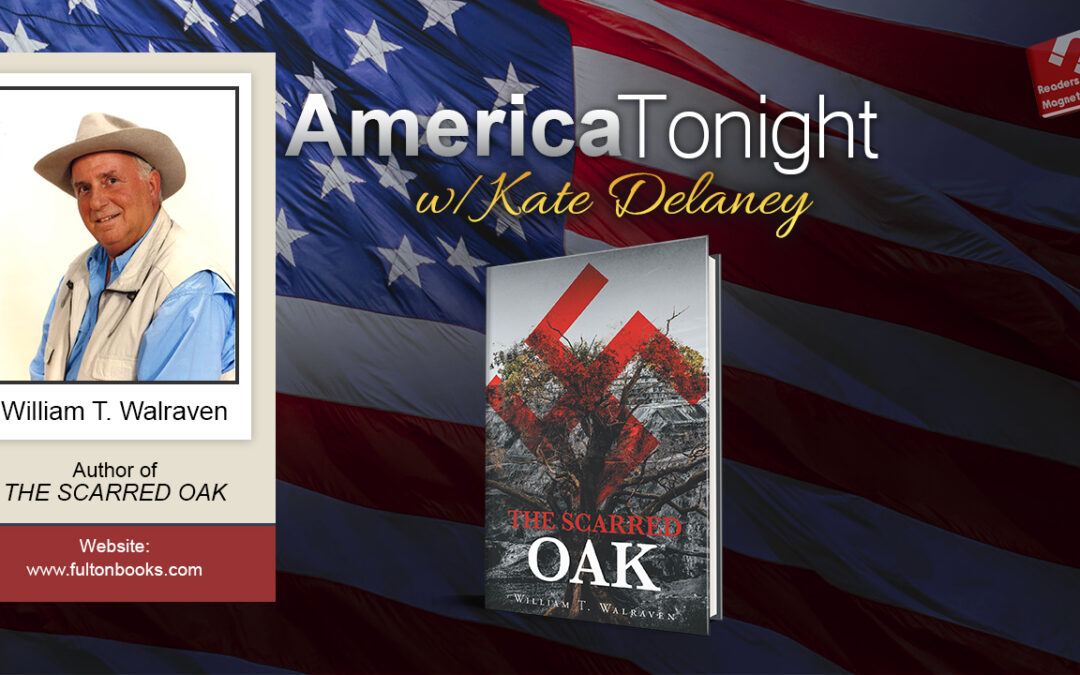 William Walraven, the author of the intriguing memoir The Scarred Oak (Fulton Books; 2020), was featured on the latest episode of America Tonight’s “Author’s Corner,” where he was interviewed by Kate Delaney.

This book recounts the author’s childhood experiences growing up in a small village on the German border in southern Holland, where he experienced the commencement of World War II as the Allied offensive came through his village and the horror of the retreating German army. It tells the readers what it was like to live in World War II and how people dealt with the hardships that came their way, such as scarcity of food, financial instability, and unemployment.

On top of that, the author’s experiences in this book will teach readers how to overcome limitations, appreciate life no matter how difficult the circumstances may be, and possess strength, wisdom, and insight beyond expectation. It educates the reader about the atrocities and consequences of war, as well as how one country and community can avoid wars in the future. There is so much to learn from reading this well-thought-out book that it can be used as a reference for research, a topic for a term paper, or reading material for students studying World War II from a personal perspective.

“Well, it was a small and peaceful village, and they came unexpectedly over the border in July 1940. They were in control of everything, and within the year, they had all the razzias (i.e., a hostile raid for purposes of the conquest of capturing slaves) grouped and pulled out of their own houses and into an open space,” William said. He explained that there was this list of names in their hands, and most of them were Jewish.

“They put pushed them into big trucks and hid them, and then they were gone,” he said. “They were not friendly,” he added.

William was ten years old when this happened, and it all seemed to be terrifying to him even as a boy. He never understood why people were dragged out of their own homes and how all of this could have happened in his small and peaceful village that he lived in. It all seemed questionably wrong, strange, and terrifying at the same time.

In fact, he mentioned that it was so terrifying that people got shot on a daily basis for not following the rules. “…..we had a curfew at that time, and one of them was when it was 8 PM. All the people had to get off the streets, but my dad who worked on a night shift, was an exception since he worked in a coal mine,” he said.

“There was this one time I came back home past the curfew, and I got shot. I got glazed around my leg that it was awfully painful that I felt the blood coming out of my leg then my dad pulled me out in time inside our house and was saved,” William said.

Let’s take a quick peek at The Scarred Oak “….and tell us the story of how you and your friend found the American?” Kate asked.

“Well, we were both kinda enthusiasts about all kinds of stuff, you know! It was Wednesday when we found him, where we only had a half-day of school. It was windy, it was cold, it was like any other winter day when Nico found something and said, ‘What is that laying there?’” William told Kate.

At that time, William and Nico wondered what’s not supposed to be laying there, is laying there. “…and then we went over there, and we found an American laying under his parachute. He was badly injured, the bone was sticking out of his leg, and he was unconscious,” he said.

“Of course, we weren’t gonna give him to Germans,” he joked. Instead, William and Nico tried to find other ways to help the unconscious American. “So what we did was we pulled a sled because we could carry the American, brought him into a convent where we know they could help him,” he said.

“At that time, it’s kinda bravery but also dumb. Because if we give him to the Germans, we would be in trouble,” William exclaimed.

“What can people take away from reading your book?” Kate asked

“We are stronger than we believe ourselves to be. No matter what life throws at you, there will always be that silver lining that will help you find your answer.”

Interested? Find out more and get your copy today at Amazon.