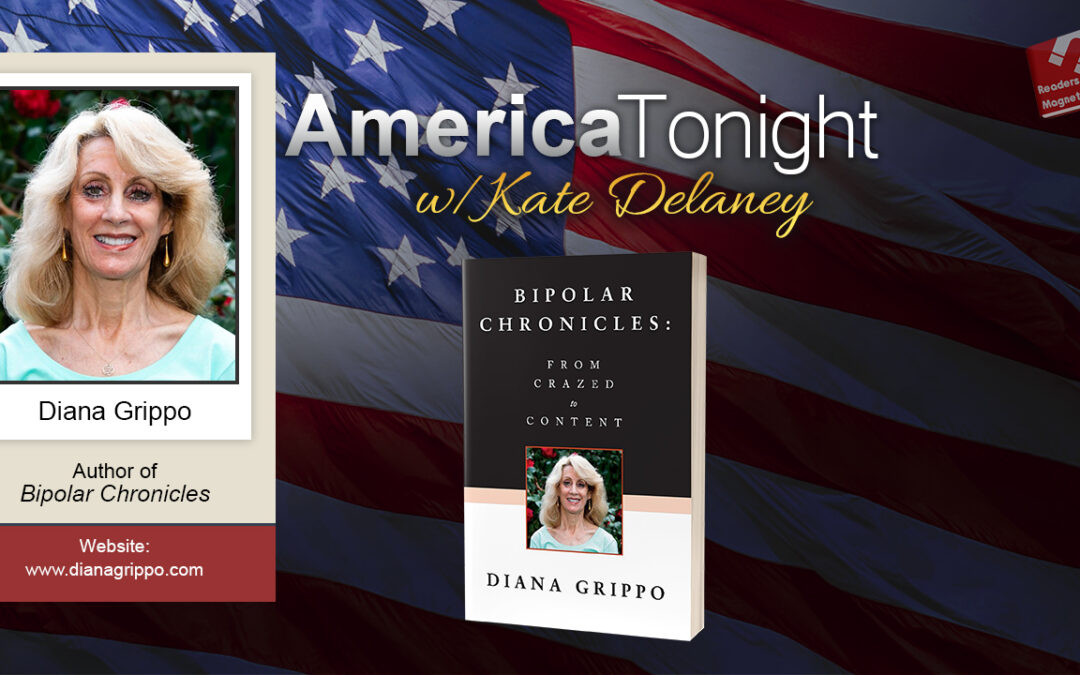 Diana Grippo, author of the memoir Bipolar Chronicles: From Crazed to Content (Book Baby; 2021), was featured on the most recent episode of America Tonight’s “Author’s Corner,” where she was interviewed by Kate Delaney. The interview begins with her long-term struggle with hallucinations, delusions, depression, and drug dependency, which led to her living on the streets due to her undiagnosed bipolar disorder. “They didn’t properly diagnose me for a while, but then after a few years, they did diagnose me as bipolar,” she exclaimed.

Diana discusses this in detail by introducing her new book, which recounts her struggle with mental illness and how she overcame the challenges she faced. She has suffered from bipolar disorder for 34 years and was depressed from a young age. And ultimately, after much struggle, she has learned to cope with her illness by adopting a spiritual practice that included The Twelve Steps, music therapy, and Dialectical Behavior Therapy.

It is an inspiring memoir that gives hope to those diagnosed with the same mental illness as Diana, along with advice to loved ones on how to support them.

Getting to know Diana Grippo and her writing journey

Diana was a high school teacher before she worked for Apple, but because she had bipolar disorder, which caused her to have unexpected “manic episodes” (i.e., a psychological condition that causes a person to experience unreasonable euphoria), she had no choice but to leave. “I was a high school teacher before, and when I would get manic. I would have to leave and find another job,” she told Kate in the interview. She expressed how difficult it was to find another job when she was having one of her manic episodes at work and a company that would support someone with her condition.

“When you were writing Bipolar Chronicles: From Crazed to Content, was it kinda cathartic for you?” Kate asked. “Yes, it was very cathartic,” she said.

She had notes written throughout the years as she struggled with her condition until the pandemic when almost every company issued their employees the option to work from home. There, she was able to finish her book and expressed how satisfying it was to do so. Diana exclaimed how happy her parents were and how she felt good about it.

How Dianna came to be diagnosed with bipolar disorder

“Well, what happened was I wasn’t properly diagnosed for a while, and I didn’t know what was happening. I was hearing voices, and I couldn’t sleep to save my life, and I was confused and ended up living on the streets, and I didn’t want my parents to see me that way,” Diana said.

During those times when she was left wandering off and confused, she drowned in hallucinations that eventually led her to the streets. She was in and out of hospitals, and doctors didn’t properly diagnose her for quite some time. After a few years, they diagnosed Diana with bipolar disorder. “I was given lithium and got stable on lithium. I don’t know about other people, but for me, I do need to be on medication, and therapy is also very helpful as well,” she explained.

“With the different kinds of therapies performed, what has really worked for you? How do you calm yourself down if you’re having a manic episode?” Kate asked.

“Dialectical Behavior Therapy, which was developed by Marsha Linehann, is really helpful. It stresses things like mindfulness and opposite action, such as when you have a “manic episode,” you have decreased need for sleep.” Diana explained. And when that happens, she takes something like a Seroquel. It’s a medication for bipolar disorder to help her sleep when she’s manic. “Because I can’t sleep to save my life, and medication really helps,” she explained.

Moreover, Diana discusses how mindfulness therapy can help you do the opposite action when you are depressed. Reaching out when you want to isolate yourself and exercising when you want to lie in bed are both very helpful.

“I like that you certainly have a lot of listeners out there with some helpful hints and techniques and things that they can do. In this story, you’re very honest. I love that you are so authentic about what you talk about in your book.” Kate commented.

“Well, medication can definitely help, and for me, I do need medication. I think it’s very difficult to achieve stability without medication and therapy, as well as exercising, eating well, and getting enough sleep; sleep deprivation is a big no-no because it can trigger manic episodes.” Diana said.

What do you hope people take away from reading it? Kate asked.

“I want to give hope to people who have bipolar disorder or any other mental disability,” she said. Diana hopes they will become hopeful and will remember that it is a treatable illness and that anyone can get better if they are willing to work hard for it.

“I worked for Apple. I’ve been there for nine years, and I love it there. They’ve been really helpful, and I am happy to have a company that’s supportive. I mean, I got manic last year, and I was able to go to the hospital and get stable and go on a paid leave from Apple, so bless Apple.” Diana added.

A Remarkably Inspiring Book for People Suffering from Mental Disorders

When most authors write for entertainment, Diana Grippo’s new book, Bipolar Chronicles: From Crazed to Content, offers hope to those who suffer from such disorders. It has a five-star rating on Amazon and is highly recommended for readers. It is described as incredibly well-written, with deep empathy for the struggles of dealing with mental illness. If you want to learn more about Diana Grippo’s account of what it is like to be bi-polar, grab your copy of the book today at Amazon.