Majestic Spots to Check from Each of the Seven Continents 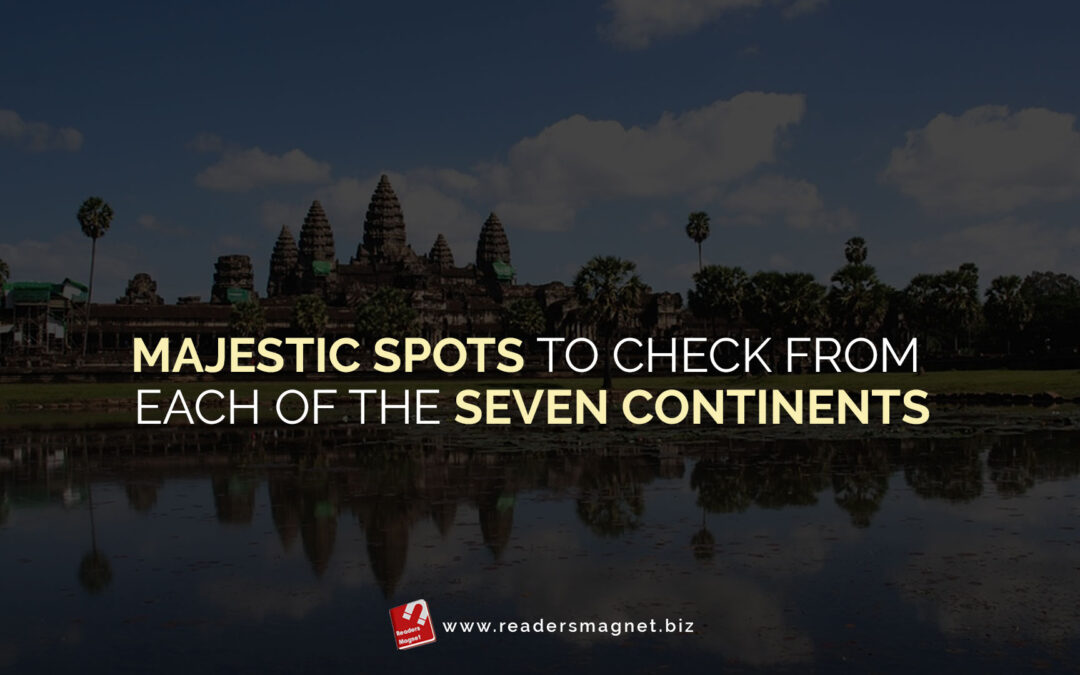 ReadersMagnet Review presents seven locations from each continent that has inspired travel books.

Africa: The Island of Madagascar

The second-largest continent in the world is home to many notable landmarks and sceneries. After all, it was once called The Motherland, and many ancient civilizations rose from here. Yet among the many beautiful lands in the continent rich in biodiversity and culture, none is more majestic than the island-country of Madagascar. In Nicki Geigert’s Family Trip to Magical Madagascar and Beyond, we see the majesty of its land, forests, rivers, beaches, and nature. From the Baobab trees to the breath-taking landscapes and its exotic inhabitants, Madagascar is a land of inspiration and serenity, and Nicki Geigert’s fantastic travel photos of the country, as well as Zimbabwe, are a must-see for nature lovers and adventure-seekers.

The Earth’s southernmost continent is in its totality a marvel. The whole continent is covered in ice and is the coldest, driest, and windiest continent. But wonders can be found even in this polar desert. It has inspired numerous expeditions and, of course, travel and wildlife books, including James Lowen’s Antarctic Wildlife, Camille Miller’s 100 Dives of A Lifetime, and Skiing Into the Bright Open by Liv Arnesen. Readers might be surprised that there are many attractions in this remote continent, such as Penguins, Seals, a variety of whales such as Orcas and Humpbacks, exotic birds, a great night sky view, and of course the unique weather.

Asia: Japan and Its Prefectures

If you are looking for great travel spots, Asia hosts thousands of great locations, from ancient to modern to exotic. Being the largest continent on the planet, it is only fitting that Asia is home to the most extensive collection of culture, language, and scenic views. However, if you are looking for a country with an ancient culture, provincial towns, modern technology, and a culture that has inspired the whole world, Japan is the place to be. The travel books inspired by this relatively small but mighty country are too many to mention. Japan and all its cities are genuinely remarkable. It is also the home of the finest cuisine, the latest technology, and diverse pop cultures.

Much like the continent of Asia, it’s hard to pick one single spot in Europe for travel. Rich with history, politics, landscape, religion, arts, and culture, Europe is the number one travel destination in the world. There are too many sites to see, but the City of Hallstatt in Austria is our choice because we want to offer something refreshing and relatively not too crowded. The small town of Hallstatt is home to beautiful mountains, the famous Hallstatt lake viewpoint, an old salt mine, a picturesque center, and the wonderful house architecture scattered all over town. The novel Journey By Moonlight by Antal Szerb is set in the town of Hallstatt

If I Fall, If I Die by Michael Christie, Indian Horse by Richard Wagamese, Dog Tracks by Ruby Slipperjack, and Crow Lake by Mary Lawson are among the modern novels set in the wonderful province of Ontario. It is also the capital of Canada. Canada, especially Ontario, is home to many beautiful landscapes and unspoiled nature spots in the North American continent, including Niagara Falls, St. Lawrence River, and its Thousand Islands. Ontario also has many provincial and national parks that have captivated the hearts of many tourists and local visitors. It is also home to the Royal Ontario Museum and Canada’s Wonderland.

Oceania: The Whole of Australia

Australia is our fitting choice simply because of its size. After all, Australia was once known as an island continent. Australia is a modern island with advanced city landscapes and industries and a place known for its wildlife and biodiversity. It has inspired numerous books, films, and operas. Aside from endemic species and excellent harbors, Australia is also known for its beaches, forests, and national parks. It is also home to the famous Great Barrie reef, a haven for thousands of majestic marine life.

In Che Guevara’s memoir The Motorcycle Diaries, we discover the great beauty of South America and its Latin countries. As much as we want to feature the whole continent for its rich culture, wonderful people, and amazing views, we settled with Peru’s famous and mysterious Machu Pichu. This ancient city, the home of an ancient civilization, offers excellent views, including an Incan citadel set high in the Andes Mountains in Peru, above the Urubamba River valley, built in the 15th century. Machu Pichu is a place that has made a profound impact on many visitors, including one of the worse most famous political figures.