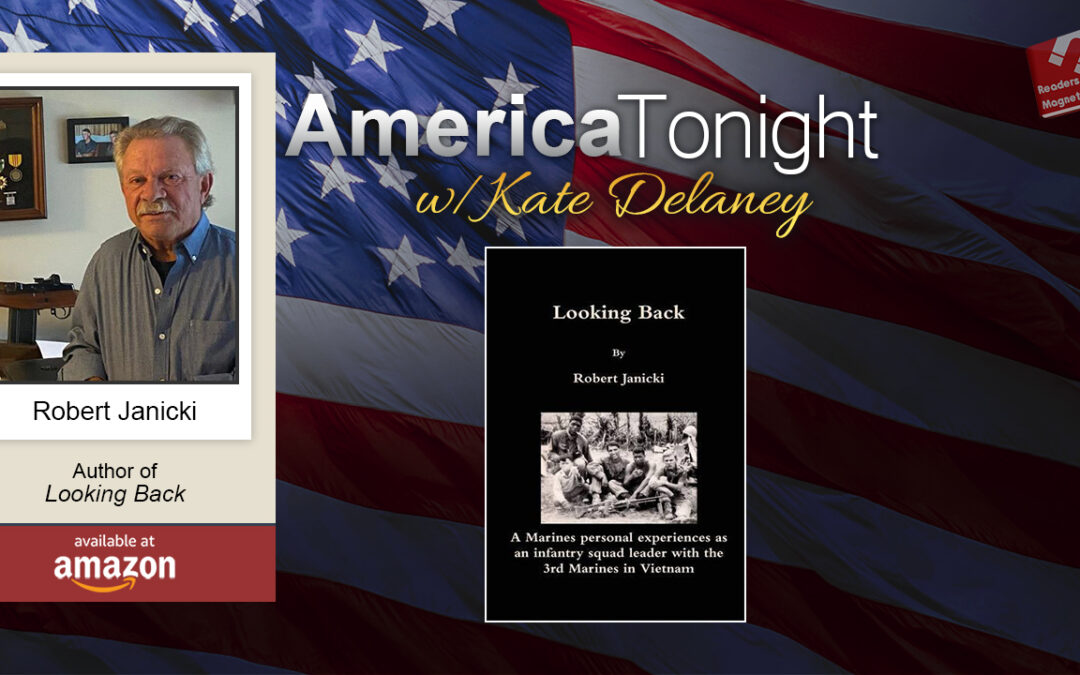 Robert Janicki, the author of the memoir Looking Back (Lulu; 2016), was featured on the most recent episode of America Tonight’s “Author’s Corner,” where he was interviewed by Kate Delaney.

This book tells the story of a Marine’s personal experiences in Vietnam, serving from September 1967 through October 1968. It tells about his experience as a squad leader of the 3rd Marine Division, his basic training in the United States, jungle warfare training in Okinawa, and his day-to-day life in Vietnam. He also describes how the Marine infantry lived in the shoreline villages and deep jungles of the north. The book uses Robert’s experiences in the Vietnam War as a backdrop and is dedicated to all the veterans who have suffered from PTSD (post-traumatic stress disorder).

Knowing Robert and how he came to write a veteran’s life in war.

Robert’s writing journey wasn’t easy; in fact, it took him 30 years to finish his book. Without the support of his family and veteran support group, one can only imagine what it must have been like to be trapped in those memories, especially for the soldiers who went to war to serve and protect the country. To cope with his trauma from Vietnam, he joined a veteran support group while writing his book.

“We were allowed to create a veteran’s group that we could speak to live, and in preparation for that, we had to make notes, we had to create storylines around our notes, so we took some rather powerful moments of our experiences,” he said in the interview with Kate. He added that it was there he learned how to put some of his thoughts down, and as he went over his notes, he began to expand on each of the bullet points, which eventually became a book over a long period of time.

What do people need to know about veterans?

“It was horrific,” he said. He recalled how it was a battle all night when the Tet Offensive (i.e., a coordinated series of North Vietnamese attacks and outposts in South Vietnam) started. He described how a large battle took place and that their role was to try to stop the NVA (North Vietnamese Army) forces from coming in from the north, as they were the blocking force. “We fought them for the rest of my time there, where they were scattered all over Vietnam,” he added.

“How difficult was it when you grew close to so many of the guys one-by-one till you lost, and then you had to keep on fighting?” Kate asked.

“It’s one of the things that haunt us the most,” he answered. He expressed how they didn’t have time to mourn and couldn’t let their emotions drag them down. Whereas in those moments, even if he had to watch his comrades die one by one, he had to think about the next second, the next move, the next hour, which was one of the biggest issues for veterans who fought in Vietnam. He describes how, as veterans, they experienced tremendous survival guilt (i.e., is a mental condition in which one believes they have done something wrong by surviving a traumatic event) and had no chance to mourn all the people that they loved and trained with.

“What do you think are some of the other things that people don’t realize?” Kate asked.

“Well, some of the biggest things is the survival guilt,” Robert said. He shared how there was no safe place in Vietnam. “…it wasn’t like the wars in the past where you had the enemy in front of you or behind you. No, units like ours, we were out there every single night and were in strict perimeter in protecting ourselves.” He added. And what he had experienced in Vietnam didn’t go away.

As a result of the casualties he had witnessed, he suffered from survival guilt. The same was true for the veterans in their support group, who suffered from severe depression, anxiety, and post-traumatic factors as a result of their experiences in combat, and it was there he learned that all these other veterans were sharing the exact same thoughts and feelings he had.

He said, “In one way, that I wasn’t alone in this.” For Robert, it was a huge relief.

Why read “Looking Back”?

“From reading it, they will learn the feelings that we went through. It’s the feeling and the emotion that we carry with us every day, everything from joyful laughter and difficult situations to the sorrow of loss,” Robert said.

If you want to learn about a veteran life, Robert Janicki’s book Looking Back is a must-read. It captures the real-life experience of what occurs before and after the battlefield. Order yours today from Amazon.