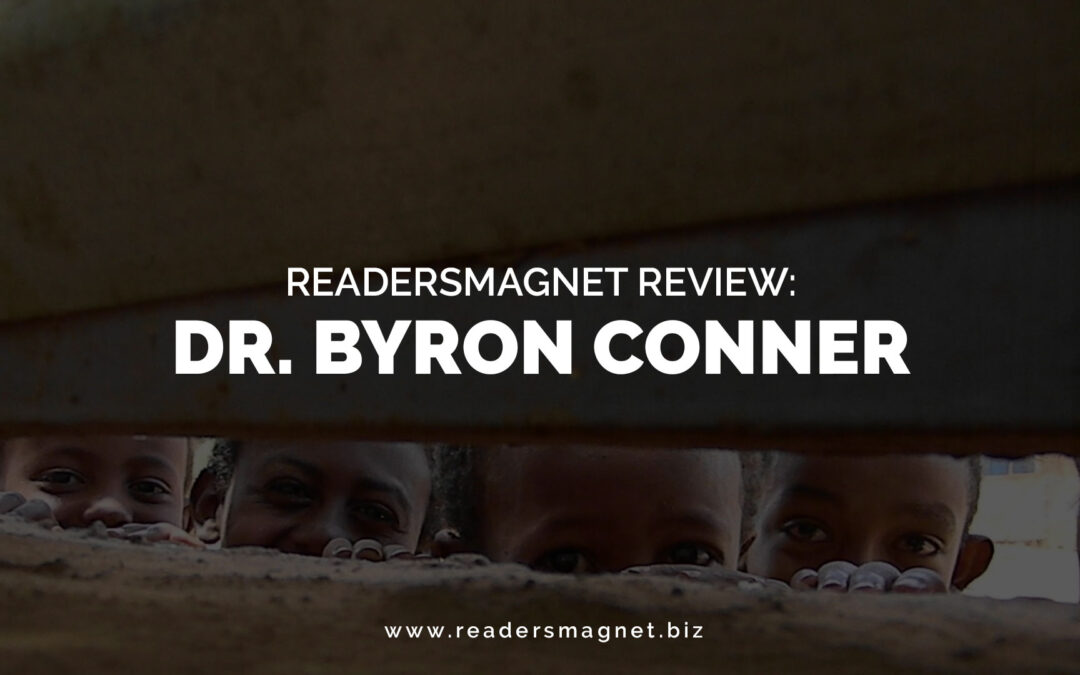 ReadersMagnet Review takes a closer look at the man behind the powerful memoir The Face of Hunger.

In the previous months, we have a riveting memoir about the infamous famine of Ethiopia. The 1983-1985 national food crisis claimed millions of lives that claimed an estimated 1.2 million deaths, 2.5 million displaced and over 200 000 children orphaned in what is known as one of the worst human tragedies in recent history. One man saw the horrors and chose to dedicate his time and energy to help ease the Ethiopian people’s pain and suffering- Dr. Byron Conner, M.D. His book, The Face of Hunger: Reflections on a Famine in Ethiopia, is a compelling first-hand account of the great famine and suffering that he witnessed in the African country. Today, we will get to know more about Dr. Conner’s mission for Ethiopia, as well as his life before and after his missionary work in the continent.

Bryon Conner was born to a modest family in Denver, Colorado. He was the oldest of eleven children. Even at a young age, Bryon was already close to God. He joined the Seventh-Day Adventist Church when he was only nine years old. Byron Conner went to Union College in Lincoln, Nebraska. His study was briefly interrupted by two years of service in the Army. Byron served a tour in Vietnam between 1968 and 1970. After his service, Bryon attended San Bernardino Valley College and later on at California State College in California. He went to medical school at Loma Linda University in California and then obtained his three-year residency in Internal Medicine at Denver’s Exempla Saint Joseph Hospital.

After completing his residency program, Dr. Byron served with the U.S. Public Health Service in Earlimart, California. He served and worked hard for two years before deciding to fly to Ethiopia together with his family to serve as missionaries in the crisis-stricken nation of East Africa.

After this, there was a two-year term of service with the U.S. Public Health Service in Earlimart, California. Then Dr. Conner, his wife, and children served as missionaries in the country of Ethiopia in East Africa. (1984-1987).

One sleepless, Dr. Byron Conner saw a television advertisement playing a fundraiser for famine victims in Ethiopia. Conner was so touched by what he saw that he decided to go there and actually help with the mission. Together with his wife, Alfredia, and their children, they went to Ethiopia as missionaries.

During their three-year stay in the country, Dr. Conner and his family witnessed the lack of food and the sorry state of the country’s health care program. The lack of doctors, nurses, and medical supplies made it hard for people like Dr. Conner to accommodate all the patients. Dr. Conner and his family spent most of their three-year mission in Addis Ababa and in Gimbie, where he managed a small clinic. Aside from the famine, the country is also suffering from various illnesses such as hepatitis, tuberculosis, malaria, parasitic infections, and diseases transferred through vectors. There were also tribal wars and state abandonment, forcing many to leave their homes and villages. All these encounters would figure prominent in Dr. Byron Conner’s memoir, The Face of Hunger.

After his time in Ethiopia, Dr.Byron Conner worked for the Colorado Permanente Medical Group (Kaiser Permanente) as an Internist, at the Skyline medical office, in Denver, Colorado. He served as a hospitalist at Exempla Saint Joseph Hospital. During this time, the couple developed a community health outreach program to churches, community centers, and working together with various agencies, including the American Heart Association, the American Diabetes Association, the Alzheimer’s Association, and the Center for African American Health.

The community work involved health screening, lecturing, writing, and also working now with the uninsured at a local clinic, the Inner City Health Center. The couple has since expanded their outreach community work, including blood pressure screening, blood sugar screening, health education, and referral for the uninsured. Their work has aided thousands of people.

In 2016, Dr. Byron Conner finally published his memoir about his time in Ethiopia. The book, The Face of Hunger: Reflections on a Famine in Ethiopia. Since its publication, it has inspired many readers and has been featured in several articles and book events, including the Los Angeles Times Festival of Books in 2019 and the Miami Book Fair in 2019.

To know more about Dr. Byron Conner, M.D., and his book, buy a copy or visit his author website today.