Unmissable Things to Do In Madagascar on Your Next Trip 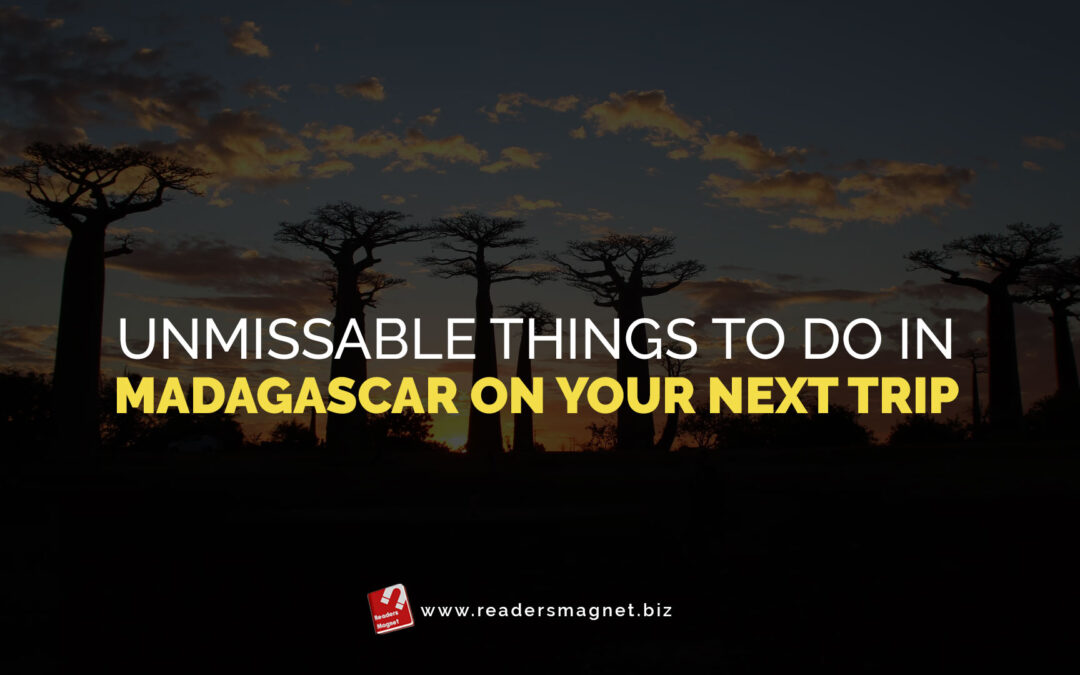 Adrift in the Indian Ocean, experience an adventure of a lifetime on magical Madagascar—a country few know much about, and even fewer have traveled to for the last two years. This island country boasts a plethora of otherworldly landscapes, thousands of endemic species of animals, and some of the world’s most beautiful and isolated beaches. Madagascar is a dream destination for every traveler, and nature photographer and full-time traveler Nicki Geigert can attest to that. Of all the places in Africa, this beautiful destination is at the very top of travelers’ list. Although all entry to the country remains prohibited, traveling on the said island isn’t far from happening, hopefully early next year. So if you’ve plans to go visit this region, here are some unmissable activities to add to your itinerary.

Hike on the Rough Terrains of Tsingy

What most travelers don’t know when going to this beautiful island country, there’s far more to immerse in other than nature. Apart from the beautiful fauna and flora that Madagascar offer, the limestones of Tsingy de Bemaraha Strict Nature Reserve is a breathtaking view. Despite the long journey and bad roads going to this reserve, it will be worth it. This major tourist site is exclusive with its biodiversity and unique landscape. This park is surpassingly difficult to traverse, perfect for walking on foot and up-close viewing of endemic species. For travelers who enjoy hiking, this limestone park is perfect for you.

Have a Taste of Madagascar’s Vanilla

For sure you’ve tried vanilla-based foods, but Madagascar’s product is unlike other vanilla. This island country is the world’s leading producer of this ubiquitous natural flavor—and for a good reason. The vanilla from this beautiful destination has higher concentrations of vanillin than beans from other countries, another reason why this spice is richly flavored. Since this country is surrounded by wide oceans, they boast fresh and appetizing fish and sea-focused meals with vanilla sauce, giving it a rich taste. Additionally, many restaurants and bars will feature a lineup of bottles of rum infused with vanilla.

Journey to the Pirate Cemetery

On the small island of Ile Ste-Marie, four miles off the coast of eastern Madagascar, lie the final resting place of dozens of notorious pirates who terrorizes the seas during the 17th and 18th centuries. Up to 1000 pirates called this rocky island home once, including William Kidd, Abraham Samuel, and even the feared brigands Adam Baldridge. The crumbling cemetery with graves half covered by tall grass is open to the public. It is ironically a peaceful land and still a place filled with the bones of violent and restless men. This islet is a thriving tourist destination.

Orchids are usually seen as beautifully colored flowers, but a newly discovered species from Madagascar is far from pretty. The orchid, Gastrodia agnicellus, was first discovered early 2020, living and dying in the shade of the island’s evergreens. This small, brown orchid spends most of its life underground and has no leaves, only surfacing to produce fruit and disperse its seeds. Although it isn’t the most charismatic orchid out there, it actually has quite a fresh, citrusy smell. This species might not meet the conventional attractiveness, but this is a perennial plant you must see at least once.

Madagascar’s food reflects the country’s cultural diversity. Natives in the country have a variety of delicacies made out of almost anything, be it fauna or flora. But as a means to save Madagascar’s wildlife, its populace and an entomologist are working to revive bug-based cuisines. They’re not only healthy but also sustainable. So why not try exotic bug-based dishes? Not only are you going to have a one-of-a-kind experience but also help provide viable source of income for the impoverished people of Madagascar.

Home to some of the most breathtaking sites and diverse culture, Madagascar is a land of surprises. There’s a lot of activities you can try out when you visit this magical country once it opens its borders.