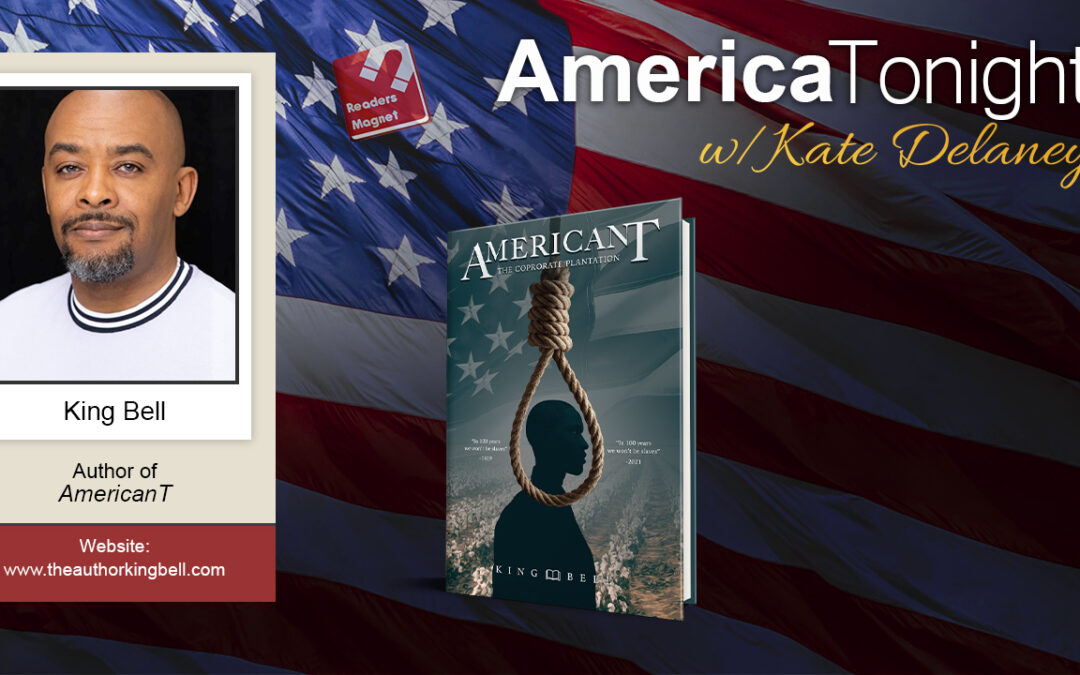 What does being black in America feel like? Are black people still slaves in the country? Author King Bell explores these hard questions and their difficult answers in his momentous thought-provoking book American’t: The Corporate Plantation (BookBaby; 2021).

The author recently guested on Kate Delaney’s nationally syndicated radio talk show America Tonight to share his experiences and thoughts in writing American’t. The book resulted from the national consciousness following the murder of George Floyd in May 2020 – and the author’s determination to speak up and not stay silent on the issue of racial injustice.

“I watched George Floyd get murdered and I was crying,” Bell told his host. “I just made up my mind that I wanted to do more than wear a t-shirt or walk up and down the street with a sign. I wanted to provide some kind of substantial contribution. This book is that contribution.”

In American’t, the author strives to highlight the black experience in modern America and draw the (non-black) readers’ attention to the challenges faced by blacks. He wrote the book not to inflame the already tense racial situation but to encourage his non-black readers to empathize with the black experience.

“I tried to incorporate the many different nuances of being black as I possibly could in one book. Being a new author, you understand what I’m about to say. I read a lot of books. Most of the time, we tackle one subject, and that’s the theme throughout the entire book.”

“My book is a completely different approach. I really try to acquire the readers’ empathy to various situations. And just waking up black in this country. Regardless of what anyone who’s not black thinks or feels our progress. The goal is empathy. Let a black man write something. You read it and empathize. That’s the goal here.

American’t has proven itself to be an entertaining and socially enlightening read, given the author’s feedback.

The author reiterated that American’t appeals to all people, regardless of skin color, for the message he strives to share with all readers. “I think you do not have to be black to gain a connection to one of these characters. That’s a point that I want to make.”

What the book American’t is all about? The book is the first installment in a planned three-part series and is a cross between black fiction and social commentary.

“The book is based on six black men that live in Charlotte, North Carolina,” said King. “All of them work in corporate America, except one. One of them is a pastor.

“What you get to do is see the different aspects of their life in the corporate arena as far as work relations. You get to see the pastor in the church, dealing with political issues. Just because this church doesn’t mean that it’s perfect, it’s still a people-founded institution, so there are people issues that he has to deal with.

“You get to see and navigate love, friendship with one another, and so on. I think it’s a human book. I don’t think it’s a black book.”

The author held no bars in talking about the hypocrisy of America in dealing with black people. He said, “Black people are still slaves. We can debate progress all you want, but we’re still at the bottom of the totem pole. I can give you a thousand different examples but let’s talk about the opioid crisis and how it is being handled.

“The government has sued every major pharmaceutical company in this country, and they put together this billion-dollar fund to treat the “victims” of the opioid crisis. Who were these “victims”? Those victims are predominantly white, young white men and women.

“It was also the government who was complicit, flooding black neighborhoods in the 1980s with cheap cocaine. That cheap cocaine became crack. So, when we got hooked on crack, what were we called? We were called super thugs, super-criminals. All of a sudden, the same government used this as an opportunity to create – as this did not exist before – a multi-billion-dollar prison institution that housed as many of us as they possibly could.

Get a copy of American’t: The Corporate Plantation by King Bell today on Amazon and the author’s website at https://americant.theauthorkingbell.com/