Book Review: Nobody is Somebody by Sandra Birchfield 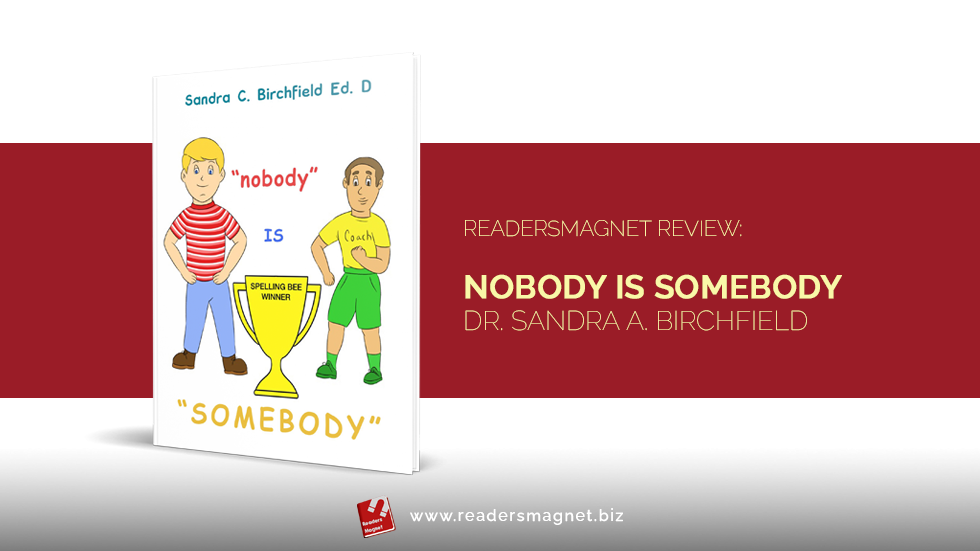 Everyone must have a sense of self-awareness. In recognizing their values, strengths, and weaknesses, people can align their goals with their internal standards.

Self-aware people can realistically assess their strengths and weaknesses, maintaining the desire to explore different aspects of themselves and grow. While it’s impossible to have total awareness, there is a certain level of self-recognition that people strive to achieve. This is why most of them have the drive to explore the world, intending to discover their life’s purpose – what they’re truly good at and which makes them happy. When it comes to children, in particular, parents must begin to introduce the idea of self-awareness and encourage them to find and pursue activities that are in line with their strengths.

A children’s book penned by Dr. Sandra Birchfield, an author, and educational instructor for 48 years, introduces this concept well.

Her book entitled Nobody is Somebody tells the story of a boy unironically named “Nobody.” Throughout his story, the readers will realize why he’s called such when he fails at his initial choices of activities – reflecting how he’s an individual with nothing he excels on.

Nobody is Somebody perfectly embodies one’s journey from being not good at anything to be the best at something from a child’s perspective.

The book starts with “Nobody” going to the gym, where he feels lost and out of place despite doing his best in exercising. The next day, readers are taken to the field where his coach invites him to play some ball, where, unlike the gym, “Nobody” found it fun. However, throughout these activities, he still felt as though he did not belong there, as other students continuously mocked him for not doing well. Soon after, “Nobody” was selected to join his school’s spelling bee. During the competition, he finally found his identity, thus becoming a “somebody,” as he correctly spelled every word. Given this achievement, the other students started praising his hard work and cheered for him.

The book does leave an impression.

Author Sandra Birchfield takes the quote, “don’t judge a book by its cover,” quite literally.

Personally, at first glance, the title does look suspiciously off for a children’s book. After all, “Nobody is Somebody” can mean that no one can become someone or that nobody can achieve something in the future. However, upon reading the book further, one will realize that it means the exact opposite. Nobody is Somebody tells its readers that everybody does have the ability to achieve something and become somebody, which means finding their identity through effort and determination.

“How nobody becomes a somebody is up to you.” This line from the book struck me the most as this teaches children that they can achieve anything if they give them a try. It emphasizes the importance of grabbing opportunities and doing their best in those. The book reflects that by being somebody, children don’t need to conform or force themselves into doing things they aren’t comfortable with. They can try the things they wish to try, do their best in the process, and be the “somebody” they wish to be.

Additionally, with the character’s initial endeavors and not giving up despite their results, the book also introduces the important concept of trial and error. It encourages children that mistakes and errors are inevitable as people experience more things in line with discovering themselves. However, those shouldn’t stop them from taking more opportunities and finding that one thing that will make them who they truly are destined to become.

This book is best for timid and hesitant children to do anything for fear of committing mistakes.

Since the book mainly focuses on “Nobody” trying different activities and not giving up or shying away despite not being good at them, Nobody is Somebody is the perfect inspiration for children to be more courageous in trying things out. I believe the only thing stopping children from grabbing any opportunity that comes their way is the fear of the unknown result, and this book perfectly refutes this fear by showing that everyone can be good at something.

Indeed, nobody can be the symbol proving that everyone is born with an identity they only need to discover – a purpose that’s only one brave step away from being realized. Therefore, if you’re looking for a good push for your children to step out of their comfort zones, I recommend Sandra Birchfield’s Nobody is Somebody for them to read.