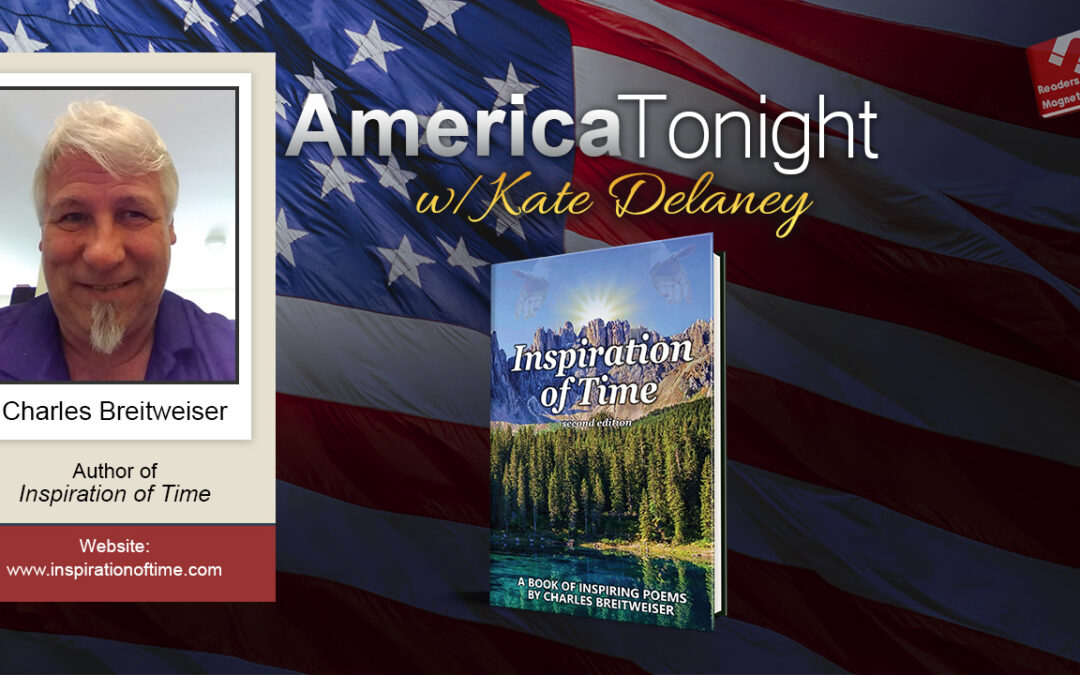 Poets are inspired to create their rhymes and verses from the heart – and recite them without reading them. One such poet is Charles Breitweiser, a motivational speaker for handicapped support groups and author of a collection of lyrical poems titled, Inspiration of Time: A Book of Inspiring Poems (Page Publishing).

Breitweiser was recently a guest in Kate Delaney’s nationally syndicated radio talk show America Tonight. He was interviewed by the Emmy-award-winning journalist about his life and book for the latter’s “Author’s Corner” segment. The guest bared how his automobile accident and eventual coma, physical therapy, and recovery set him on a path to God and poetry, a medium of expression he maximized to endure many years of emotional suffering.

Breitweiser was a 17-year-old high school senior in 1979 when he was almost snuffed out in a serious road accident caused by a mechanical defect in an old car he was driving. “The tie rod broke, and I lost control of the wheel and went off the side of the road and hit a tree. I was actually dead on arrival,” he told his host.

“I don’t know how they (the doctors) were able to get my heart started again, but then I went into a complete coma. They never thought I was gonna come out of it. Six months later, that’s when the real hard work started. I had to relearn how to walk, how to talk, how to dress, (and) even had to use the bathroom.

“After all that work, I still have physical limits on my left arm and left leg.”

Such was the predicament of Breitweiser, who had become a shell of his former physical self. He who once had the world under his feet can’t help but wallow in despair. “That process of growing was really difficult for me. I used to play the drums. I was a football player. I even had my own car repair business. I was a very physically active young man,” Breitweiser recalled.

His debilitating injury was accompanied by depression, fear, inferiority, and self-loathing. He said, “My life was over, and I felt like, ‘Aww man, I hated the world.’ I was mad at everyone, everything. I felt like I was a loser, only half a man, because I could not use my left arm or leg at the time.

“I was just mad at the world. I had a terrible attitude. I’m glad you didn’t know me then,” Breitweiser told Delaney. “I was a terrible person.

Healed by the Love of Jesus Christ

Of course, that episode in Breitweiser’s life will not last. The many years of emotional suffering were followed by years of soul searching and growth. God spoke to him in poetry. He gives all the credit of his poetry to his loving God, Jesus Christ. Jesus is the painter, and I am just the paintbrush.

“How did you turn it around?” asked Delaney.

“I didn’t do it. God did it,” Breitweiser answered. “In my sleep one night, He spoke to my heart. He gave me a poem called “My New Attitude.” That poem completely changed my life and gave me a new focus.

“It was God telling me to use my suffering as a way to help other people who are suffering in life.”

Following his emotional and spiritual awakening, Breitweiser developed a philosophy of endurance and a positive attitude and learned to turn his physical adversity and losses into strength and triumph. Believing that his poetry is a gift from God, he strives to give back by sharing his creations with the world.

One poem that Breitweiser wrote and included in Inspiration of Time is “Melissa’s Daddy.” The poem is written in honor of all the children who lost their parents on September 11, 2001 – just 20 years ago.

“It came to me in my sleep,” Breitweiser said about “Melissa’s Daddy,” “almost exactly to the year’s anniversary of September 11. It was November 2002, I remember.”

Delaney was struck by the poem that she requested Breitweiser to recite it for the listeners of America Tonight, and he was happy to oblige.

He wasn’t a fireman or a policeman;

I’m sure he would have saved someone else if he could;

But he just went to work, like a good daddy should.

He was one of the many that nobody knew;

I think you should know that he was my hero too.

I remember when he used to come home through that door.

I’d run to his arms from across the floor.

He’d gather me up into his arms as I flew;

I want you to know he was my hero too.

This is for all the children that still have hugs to give,

To parents that love them and no longer live.

And to the mommies and daddies that nobody knew,

I think you should know, they were all heroes too.

Though knowing that God gave Breitweiser the gift of poetry, Delaney still asked him what inspires his poems.

“I know that God feeds that, but when you look around, you have such a positive attitude. What is it that inspires you? What else inspires you?”

“Other people,” answered Breitweiser. “If I see someone really down and out, somebody who’s suffering, whatever it may be, you can tell the emotional pain that someone is going through, in their attitude, their expressions. But I talked to them, complete strangers.”

Poetry for Breitweiser is both a purpose and opportunity to uplift the souls of people who experience serious emotional pain. He motivates the readers to embrace their suffering as a springboard to overcome the pain that has been holding them now.

Be inspired by Charles Breitweiser’s inspirational lyrical poetry. Get a copy today of Inspiration of Time: A Book of Inspiring Poems on the author’s website https://www.inspirationoftime.com/. You can contact him on the Contact tab located on his website.