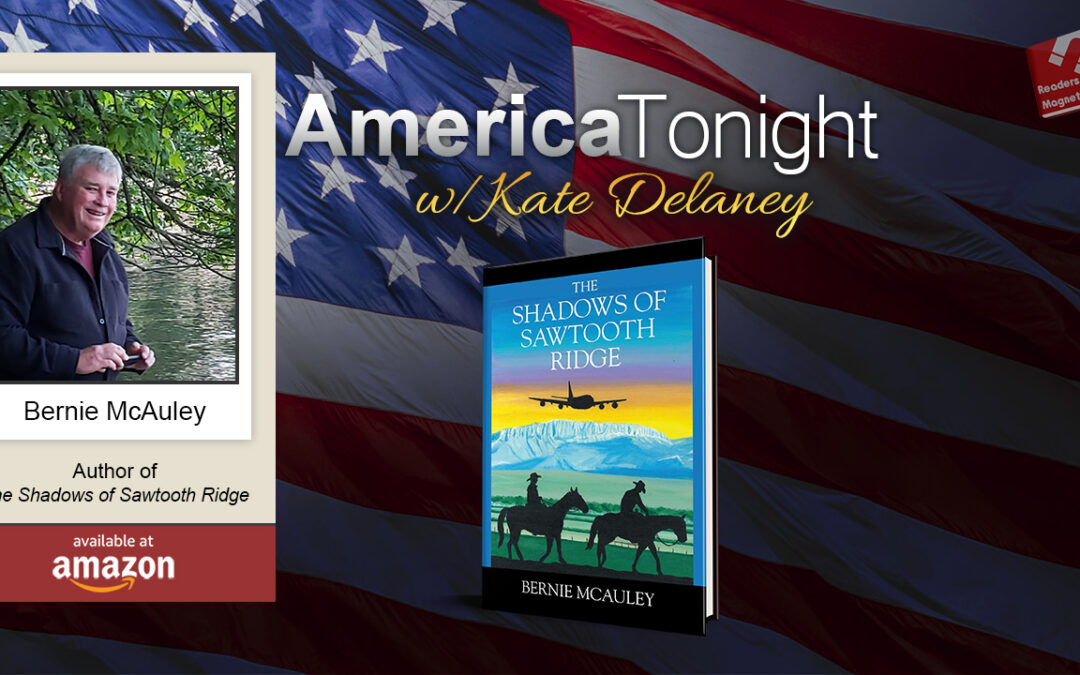 Bernie McAuley, author of the inspirational fiction The Shadows of Sawtooth Ridge (Outskirts Press; 2020), was featured on the most recent episode of America Tonight’s “Author’s Corner,” where Kate Delaney interviewed him. The interview begins with the author’s journey of how he came to write his book, which tells the story of an American POW (or prisoner of war) who returns home after the Vietnam War only to discover that his life has changed drastically. He is now a father of two, inheriting the family ranch, which is about to be sold to someone else. His career as an airline pilot is adversely affected due to PTSD (i.e., Post-traumatic stress disorder).

Bernie goes into great detail about this while reminiscing about a gentleman who flew with him and was also a POW, “…and he did come home and ended up retiring not too far back,” he exclaimed. He described how the experience of being captured could be both humiliating and traumatizing for POWs and how it could haunt them for the rest of their lives. It’s as if everything that happened on the battlefield is still vividly fresh in their minds, like yesterday. He stresses this in his book how the protagonist had a hard time adjusting to life and how to get by haunted by the memory of captivity.

Knowing Bernie McAuley and why he wrote this book.

Bernie McAuley was born and raised on a cattle ranch in Eastern Montana. Two summers in Glacier National Park backcountry as a Packer. He began his 38-year airline career in Minneapolis, MN, and later relocated to Great Falls, MT, where he spent his time fishing, hunting, and team roping in the shadows of Sawtooth Ridge and Bob Marshall Wilderness.

“I would love to have lived some of the portions of this man’s life. He’s a guy who enjoys fishing, hunting, and team roping,” Kate comments. “So, tell us about the book. Why did you write the book?” she added.

“The book is a combination of a whole bunch of stories put together. It’s my experience with airlines, and if you’ve been with them at all or have heard enough stories, there are a thousand of them. During my time there, I worked as a packer at National Park,” he said.

What is the book all about?

“It’s a book about one person’s life…,” Bernie said. Larry, the protagonist of The Shadows of Sawtooth Ridge, is a Vietnam War POW returning to his family’s Montana ranch. However, things never stay the same after he discovers he is the father of two children, Jonnie and Mark. This book gets off to a strong start with a gripping family drama that draws readers in from the first few pages. A POW returns home, recounting some of his feelings and memories as a prisoner. But Larry’s return home isn’t as pleasant as he had hoped, as the bad news of a recent death has pushed him deeper into despair.

And Bernie relays to his readers the ordinary happenings of ordinary people as well as the extraordinary challenges they face. Now, he’s working on his second book, which will be about his daughter Jonnie, who will be following in her father’s footsteps in the NAVY, where she has her own problems, such as being a female in an all-male society.

“So, your story is very much about the people, its people and how much they’ve been through, and then what happens when you’re there in The Shadows Sawtooth Ridge,” Kate said.

“Was it fun for you to write this?” she added. “Yes, it was very enjoyable,” Bernie said.

“What do you hope people take away from reading it?” Kate asked.

Bernie hopes that people will understand and sympathize with veterans’ post-war lives rather than see them as someone with a psychiatric condition. He wrote this book with veterans in mind, hoping that as citizens—we recognize and support the veterans who risked their lives, whether people appreciated it or not.

The Shadows of Sawtooth Ridge by Bernie McAuley is a captivating story that Hallmark movie fans will enjoy. It is highly recommended for readers to add to their reading list for 2021.

If you want to learn about a veteran’s life, Bernie McAuley’s book is a must-read for anyone interested in what happens before and after the battlefield. Interested? Grab your copy today at Amazon.