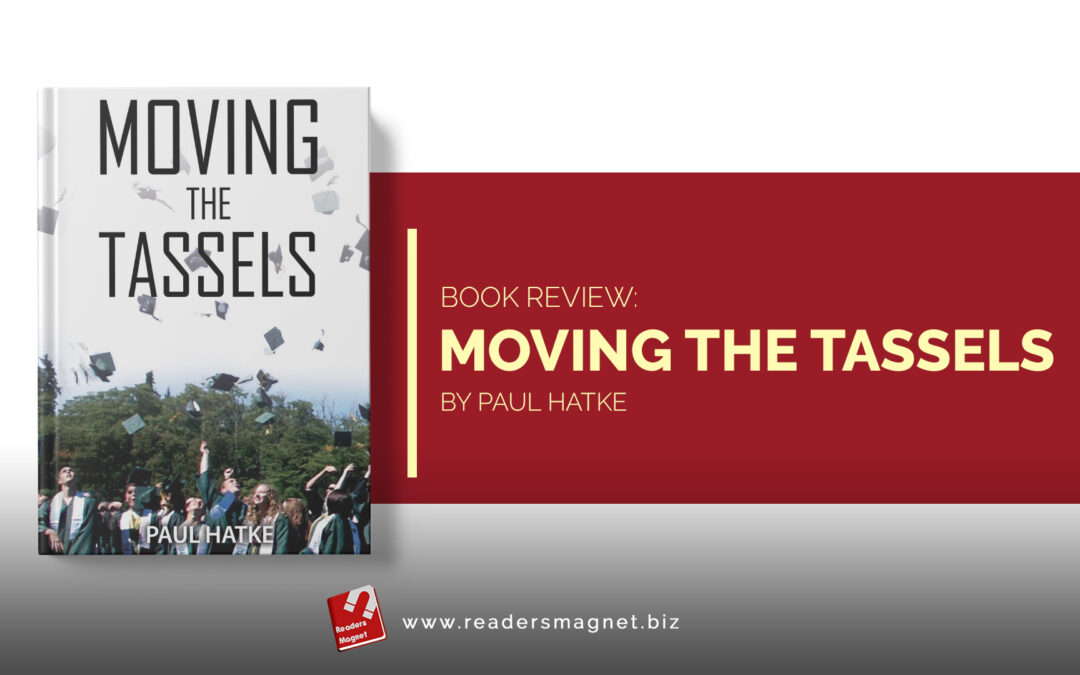 A riveting coming-of-age story with a likable character.

Moving the Tassels (Next Century Publishing; 2017) by Paul Hatke is a coming-of-age story told in the first-person point of view of a high school senior Wes Patterson.

The book takes place in an unnamed suburban town or city complete with certain amenities that kids frequented in the 1960s, such as a movie house, bowling alley, pool hall, and restaurants. The story follows the experiences of Wes, who was 17 years old at the opening of the story, in his last year in high school. He lives in a typical middle-class family home with his parents, an employed father and a homemaker mother, and his elder sister.

At school, Wes isn’t brilliant; the book hints at him barely passing the subjects but still doing and submitting his schoolwork and showing interest in certain topics. Despite his attitude to his schoolwork, he is shown to be enterprising and hardworking; to earn pocket money, he rakes leaves for the neighbors and works after school at the neighborhood grocery. He uses the income to buy a used car, which he later uses to drive people home after school to earn extra pocket money.

Wes may be “a little naive” but the texts show him to be a contemplative young man with full awareness of the times and reflective concern for his society. It’s the turbulent 1960s, with the civil rights movement, anti-war demonstrations, and the assassinations of Robert F. Kennedy and Martin Luther King Jr.He asks in his mind, “Why was so much happening at this time? It wasn’t like this in the 1950s. . . our country has been on some shaky ground and many of us in our teens are uneasy. A lot of kids wonder what’s next.” He reflects, “There sure are a lot of confusing things. There are a lot of kids in my age group that feel the same. A lot of them are taking action with protests. The war in ’Nam and the draft. Some of the protests and demonstrations seem to be getting out of hand. Some kids are going to extremes. The walk toward school can stir up a bunch of world problems everybody has to face. Maybe the problems have been around forever.”

Wes is just like most other teenagers. He hangs out with his friends, goes to parties, tries to land himself a girlfriend, among other activities that he does. “When you’re seventeen, there is still a lot of kid in you,” he says in his head. And of course, he thinks about the future too.

Like many teenagers, Wes thinks low of himself due to his financial status. He reflects, “It had me drawing a comparison on who had this and that, causing me to feel sorry for myself. Money was not easily acquired, and having less than what was hoped for made my attracting girls difficult.”

Moving the Tassels abounds with themes that deal with the many aspects of Wes’s personal lives, as well as his relationships with his family, friends, and other people close to him.

Celebration: The Patterson family celebrates Thanksgiving with his sister Kate’s Army boyfriend, Christmas, and his high school graduation. Kate’s graduation and wedding are both in the offing. Wes attends some parties at his friends’ homes and goes to Valentine’s Day party with a date (arranged with the help of Bart) and some friends.

Friendship: Wes’s noteworthy friendships with George, Greg, Dickey, Bart, Mick, and the Crays, among others. He reflects thoughtfully on his relationships with them, especially Dickey, whom he helped during Thanksgiving Night, and Bart who helped him choose a car, and how each relationship impacts him.

Home: The Patterson family home is a permanent fixture in the story and gives a glimpse into Wes’s family life – indeed, a typical middle-class family life in the 1960s. The home gives readers an interesting picture of each Patterson member’s character, which reflects the family dynamics of the 1960s.

Loss/grief: On Christmas Day, Wes is informed by his friends Dickey and Bart about the death of Arlene, his strongest crush. Wes tried to buy a Christmas gift for her but is told by Bart not to as it would make her uncomfortable. After her death, he grapples with the typical questions of faith… and death. Wes also reflects on the death of another friend, Mick.

Materialism: The television is a permanent fixture in the Patterson family home. Wes learns about the Vietnam War through the television and buys a perfume advertised on TV as a Christmas gift for his mother. At times, his father and his mother would watch the TV while waiting for him to come home at night. Thanks to his job working at the grocery and with the help of his father and Bart, Wes is able to buy a car. Not only he uses his car to get to school and drive people to their homes as a sideline but to gets closer to Charlotte, his co-worker at the grocery.

Vocation: Military service and college crop up in Wes’s mind from time to time, and he weighs the two tough options. His friend George does well in college; another friend Greg is stationed in Vietnam. His sister’s boyfriend is in the Army.

Work: As a student, Wes is no slacker, but he has the potential to land on his school’s honor roll if he puts extra effort into his schoolwork. He gets worried about his graduating from school but after receiving a B+ on a Shakespeare assignment and talking to his teacher and his sister, he puts extra effort behind his schoolwork. Wes takes his work at the grocery seriously, but he knows he can’t work forever in a neighborhood grocery as it’s not a career job. His sister works part-time at a dairy stand, and Dickey and Mick sell Christmas trees.

Moving the Tassels is a metaphorical title that suggests Wes’s transformation from naivety to maturity and membership into the adult world. The book makes for a fine reading for Baby Boomers to reflect how teenage life used to be lived and how it has changed over the years. For millennials, Wes’ story should remind them how precious their youthful years and provides insight into maturity, responsibility, and getting on with life. Moving the Tassels is a must-read for all ages.