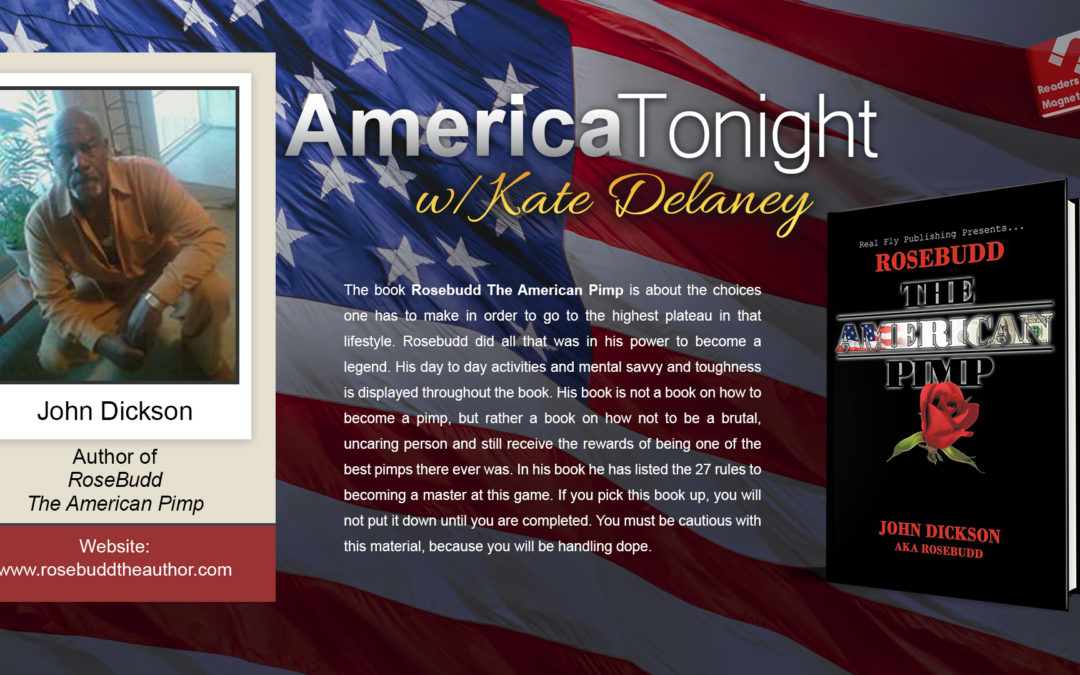 The author, who styles himself as RoseBudd the American Pimp, squashes the misconceptions often associated with the pimping lifestyle.

Former pimp and now author John Dickson appeared on the nationally syndicated radio program America Tonight, hosted by Kate Delaney. He talked about his book, Rosebudd the American Pimp, and shed light on a lifestyle that made him a legend.

John Dickson, a celebrated pimp, started out when he was age 17 or 18 and left the game when he was 55. He also appeared in the 1999 documentary American Pimp. He became a dad at 43. As an author, he has published 20 books to date. His book Rosebudd the American Pimp has earned positive reviews from many readers in Amazon and Goodreads.

Rosebudd the American Pimpdetails the author’s version of how the game of pimping goes. He shares the ins and outs and dos and don’ts of pimping and the 27 rules he lived by to become one of the greatest pimps that ever lived.His book is not a book on how to become a pimp, but rather a book on how not to be a brutal, uncaring person and still receive the rewards of being one of the best pimps there ever was.

What made him (a celebrated) pimp?

When asked by host Kate Delaney about his choice of pimping as a career path, John Dickson answered, “Would you guys tell your daughters to look out for what you describe or think of as a pimp or what a pimp does? Maybe not.

“What happens is the girl is out and meets a person like me. What they do is they end up liking me because of everything they’ve heard about a pimp is so different than what I am. Before she knows it, by the time she believes that I’m a pimp, because a lot of women that I would met, I would have to convince them that I was a pimp because I don’t look or act like one. You know, she’s liking me already by the time she accepts that I am a pimp.

“What made me one of them (pimps) out there was the way I learn to see life in many different situations that I’ve been in. I think fast and I think a lot. I got a clever way of speaking that as I put my words there, it just keeps you on edge. That’s what excites the ladies.”

Pimping is not all about the money

For John Dickson, pimping “is more of a lifestyle. People look at it strictly about the money and all that stuff. Everything that people actually think about a pimp has nothing to do with why a girl would turn out to be a ho. It’s not that she needs a pimp. She really wants a man, a real man.

Is a pimp a real man? He explained why. “A pimp is the only man who can and do see her as a woman. He’s the only man that she doesn’t need to pretend around. She can be herself. All the other people see her as a prostitute first and a woman way, way, way down the list.”

From pimping to writing

John Dickson also shared his writing journey. He said, “The way I speak and think of things and how vivid I have to explain whatever I’m explaining… is like you’re writing when you talk to somebody. You speak in a sort of cadence, not that you try to rhyme or anything but the words come together like that. Before you know it, you’re spinning some yarn. I just took that to writing. I thought I had a pretty exciting life so that’s what I wrote about first but that wasn’t really good writing to me.

“That’s where the rules about the American Pimp came from, that I just thought I could write. So, I started writing a book. What it actually did was show me that I could write. I need to write different kinds of stories, not only pimp stories. That’s the only book I wrote like that. I got 20 books, ranging from religion to vampires. I’ve got a lot of different books.”

Readers can purchase John Dickson’s book Rosebudd the American Pimp in either print or digital format on Amazon and Barnes & Noble.

To know more about John Dickson and his published works, please visit https://rosebuddtheauthor.com/