People of Distinction with Benji Cole: Douglas Ochu, “Sex is a Journey” 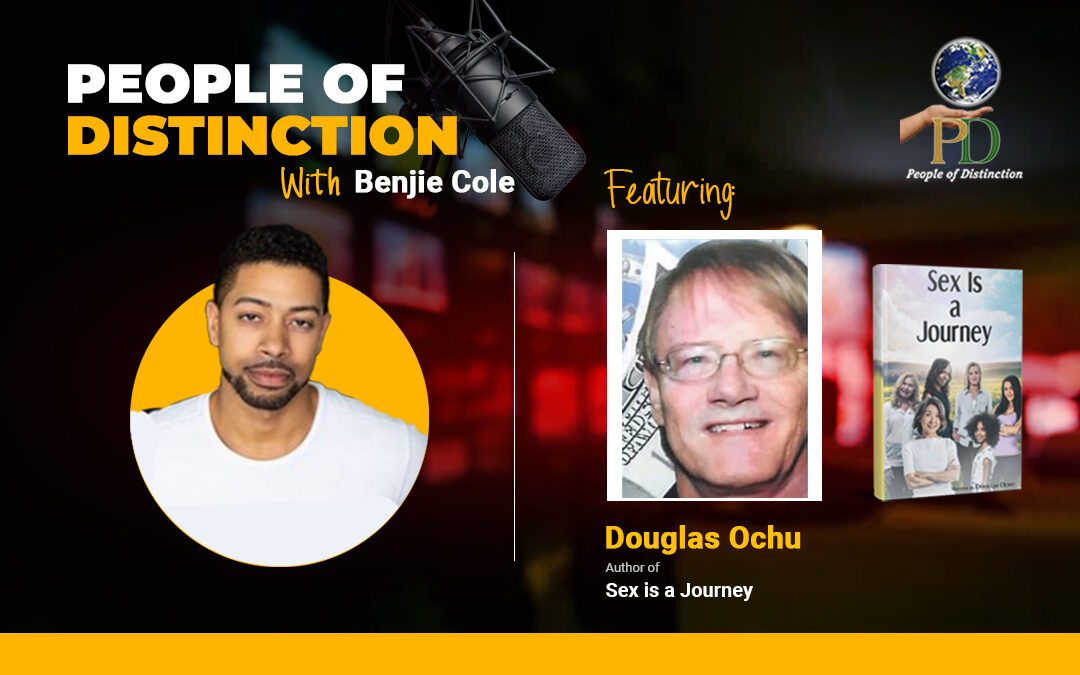 Benji Cole looked forward to his interview with Douglas Ochu, author of the book Sex is a Journey (Newman Springs, 2022), on “People of Distinction.” Since taking over his father Al Cole’s syndicated talk show, Benji has interviewed many authors who published fictional narratives, political narratives, and a bunch of other subjects in various genres. Of course, who don’t?

“When you pick up his book,” said Benji, referring to Douglas’ Sex is a Journey, “it reminds me of an old hip-hop song by Salt-N-Pepa, ‘Let’s Talk About Sex.’ What we’re gonna do today is we’re gonna talk about sex.”

To his guest, he said, “I think this may be the first book I have on the network that talks about sex.

“I think this is a conversation we should be having more often and sharing that with each other because I think a lot of stigma around sex is due to the lack of conversation and lack of awareness.”

But who is Douglas Ochu to write a book about sex? But first, a brief introduction about the author: Douglas entered the U.S. Air Force after graduating from high school. He retired after 21 years and attended college through the GI Bill. He became a massage therapist and graduated as a therapeutic assistant.

Douglas shared how he was inspired by his inner self into writing Sex is a Journey. “I was walking in the supermarket, and you have these racks with Cosmopolitan (magazines) that tell all about the special sex techniques you can do and how to spice up your life.

“I also watched the film Kinsey by Alfred Kinsey and the TV series Masters of Sex by (Bill) Masters and (Virginia) Johnson. They’re like the forerunners that brought sex to the public. That inspired me.”

What’s different about Douglas’ book Sex is a Journey, and what makes it interesting? Plus, why would he write such a book?

He said, “What’s different about my book is instead of people’s names, it’s the day of the week, so you’d read Monday’s story about her sexual journey on Monday. Then on Tuesday, you’d read Tuesday’s story.”

For his book, Douglas interviewed different people who shared their sexual experiences and opinions with him. He said, “Each individual is different. The women are different and from different backgrounds. There’s a lesbian couple I talked about. I also talked about a late bloomer on Sunday, which is a very interesting story.

“I just got inspired by my inner self to write this book and it took me three to four years to finish it.”

Benji was still impressed by the fact that a man like Douglas would publish a book about sex, a book in which women share their sexual journey. So, still curious, he asked his reason for putting out such a book for the public.

“I was just inspired to bring some darkness into the light.”

The conversation had come to the point where Benji shared his insights on the topic about sex and his own sexual journey from the standpoint of awareness. He admitted on air that at around high school age, he was actually a late bloomer among his friends in terms of having intercourse.

Benji, who viewed sex from a standpoint of exploration, urged parents to talk about the matter with their children so they could set the right precedent now that society has become ‘sexually charged.’

“I knew very early on, coming from the family that I come from, that sex is a part of life,” Benjie said. “You may want your children to hold off on sex but we understand, given the society that we live in, which is very sexually charged. These things are happening, so it’s safe and really important for you to have these conversations with your kids to set the right precedent.”

Watch the whole video to follow the rest of the conversation on sex between host Benji Cole and his guest Douglas Ochu.

Get a copy of Douglas Ochu’s book Sex is a Journey today on Amazon https://www.amazon.com/Sex-Journey-Douglas-Ochu/dp/1636921507 and Barnes & Noble https://www.barnesandnoble.com/w/sex-is-a-journey-douglas-ochu/1140865006