ReadersMagnet Review: A Thread of Hope by Jacqui De Lorenzo 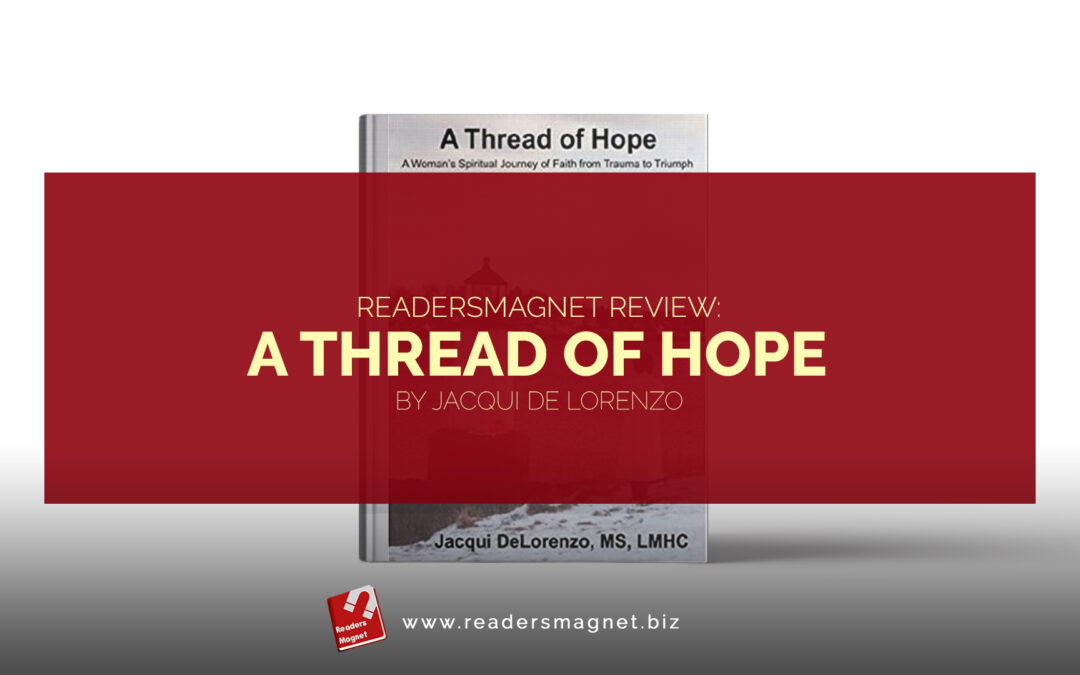 Jacqui DeLorenzo’s A Thread of Hope: A Woman’s Spiritual Journey of Faith from Trauma to Triumph is a story of a person going through a spiritual awakening.

Faith is a gift. It is not something that is embedded in our DNA or present in us the day we are born. It is a product of learning, experiencing, and going through a spiritual awakening. The journey towards faith and spiritual relationship with God may vary from one person to the other. For some, they encounter God at an early age, through family and education. Others learn about God through life-changing events that took place at one point in their lives. There are also those that have come to embrace God’s grace through a slow and tedious process. And there are people whose journey with God has been steadfast and forged by the challenges that came his or her way. Jacqui DeLorenzo’s A Thread of Hope: A Woman’s Spiritual Journey of Faith from Trauma to Triumph is a touching story of how DeLorenzo faces all the adversities in life with the help of God’s grace and guidance. ReadersMagnet Review takes a look at this inspiring work of literature.

A Thread of Hope: Inspiring Others to Seek God in Darkest Hours

Jacqui DeLorenzo is an inspirational author. Both her works (A Thread of Hope and Straight from My Heart) discussed deeply her personal and spiritual encounters. As someone who has experienced many challenges and tragedies in life, DeLorenzo’s narratives about overcoming trials and finding solace and shelter with God carries weight.

What makes A thread of Hope from her other book is that in this work Jacqui bares a personal side of her spiritual journey. For the first time, Jacqui shares to the public readers her own tragedies: from her rough childhood, the broken family, the death of her teenage brother to her own personal challenges into adulthood. She was also diagnosed with cancer and survived. Jacqui also battled an eating disorder that left her depressed and almost at the brink of giving up on life. This was in fact Jacqui DeLorenzo’s first book and was released five years before Straight from My Heart.

While many children her age enjoyed life in school in the 1960s, Jacqui DeLorenzo. on the other hand, suffered bullying. almost every day, from the moment she stepped onto the bus, walked through the schoolyard,

and stepped into the classroom, lunchroom, and even her own neighborhood, Jacqui endured harsh treatment. Her adult life also proved to be challenging and it was her faith that sustained her through those trying years.

A Thread of Hope tells the story of Jacqui’s life journey: From her parents’ devastating breakup, the death of her thirteen-year-old brother, her own struggle to survive cancer up to her battle with an eating disorder. Jacqui has struggled and came to accept the person she’s become, and will hope to become. Jacqui believes in the miracle of God’s love. This guided her to improved self-esteem, firmly believing that she could accomplish anything.

Jacqui continues to strive to grow daily and appreciates all that life has to offer. She greatly values the love of her family and friends and her health. Above all, she treasures her personal relationship with Jesus Christ. A Thread of Hope a memoir by Jacqui DeLorenzo is truly an inspiring read that everyone should take time to examine.

Written in a narrative form, reading A Thread of Hope takes readers on a personal journey not only to the various challenges of Jacqui DeLorenzo’s life but also to a process of spiritual awakening that she underwent. It is a book that will not only inspire people to be resilient, but also to embrace a more spiritual relationship with God. Truly, A Thread of Hope by Jacqui DeLorenzo is an important and nourishing read.

as an academic counselor. DeLorenzo recently decided to pursue other endeavors and gave up her position. She continues to help students at North Shore Community College in a part-time capacity. Jacqui DeLorenzo reaffirms her mission to help young people achieve healthy self-esteem and find success in whatever they do in life. Jacqui DeLorenzo is also a licensed mental health counselor through the Commonwealth of Massachusetts.