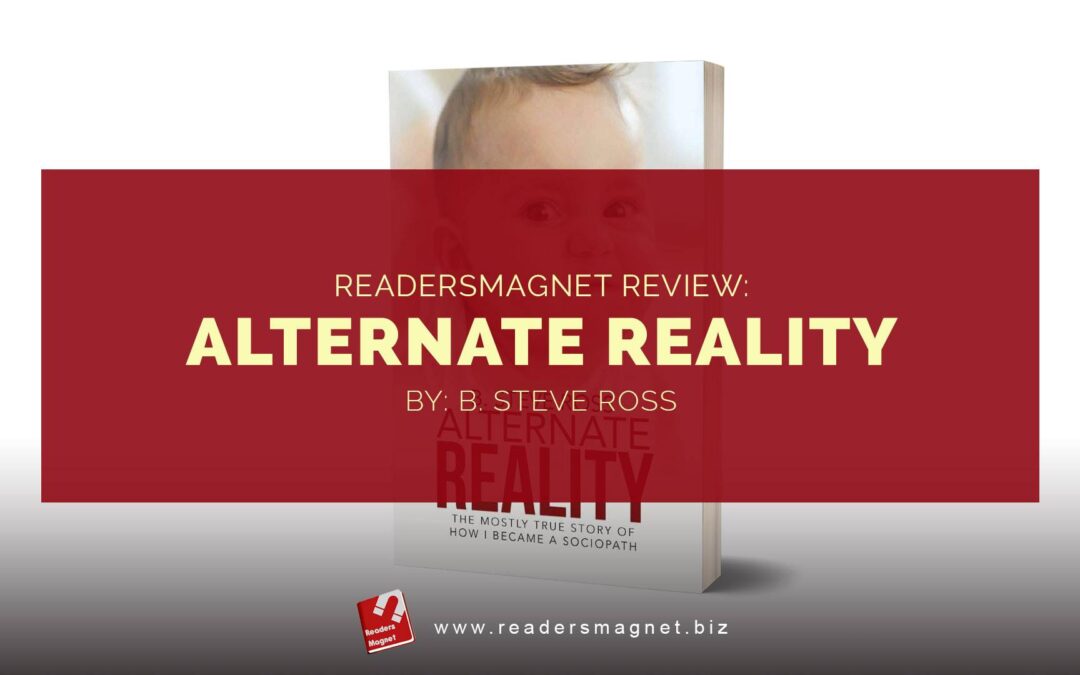 ReadersMagnet takes a close look at Alternate Reality, a funny and fantastic memoir of a sociopath.

Sociopaths are people with an antisocial personality disorder or APSD. They think and feel differently and almost always cannot feel empathy or feel what others think. Hence, they also act and interact differently from us. Some of their common characteristics include being impulsive, lack in conscience and drawn to causing harm to others without them realizing that it is wrong. These behaviors are wrongly associated with cold-blooded criminals, serial killers, and psychopaths. Today, we will take a glimpse at the not-so dark reality of people with ASPD through the eyes of a sociopath.

Alternate Reality is a memoir by B. Steve Ross. Ross is a sociopath who came from a dysfunctional family. His father is also a known sociopath who was not around for much longer. He died when Ross was only seven, leaving their mother to raise them. Steve Ross’s dysfunctional relationships are the main factors for him becoming a sociopath. In this book, Ross recounts many of his childhood experiences dealing with his condition and how he slowly learned to understand how to cope up with his surroundings.

Alternate Reality was released in 2017. The book is divided into chapters representing central ideas or important events of his life. Each chapter or passage is accompanied by a song playlist. The first chapters in the book feature Steve’s not so pleasant childhood. Though he shares fun memories with his siblings, it is clear early in his narrative that their family is a bit dysfunctional. As the book progresses, Steve takes us to various incidents of his life; many of these are funny, and some a bit unpleasant or awkward. We learn of his dysfunctional relationships and the challenges of having this personality disorder. However, Ross manages to narrate his life story and the many mishaps, mistakes, or blunders in a way that is comical and far from the dark and ominous atmosphere we usually associate with sociopaths. Readers may find it a welcome surprise that Ross’s narrative is something that we have not really heard of. It is rare to see another side of antisocial personality disorder (ASPD) that is not violent, not harmful, and above all full of positivity. Alternate Reality is a book that somehow will change our preconceived notions and stereotypes about sociopaths. Steve Ross’s accounts and confessions are very sincere and full of self-awareness. To say that Alternate Reality bridges gaps between those who don’t have ASPD and those who do, is a grave understatement. It is a well-written memoir that is also enlightening and inspiring at the same time.

About the B. Steve Ross

B. Steve Ross came from a dysfunctional family. He was born and grew up in the Appalachian Mountains. Ross lost his father to a car accident when he was only seven years old. His father was a known sociopath and occasionally violent. Ross has two siblings, a younger sister, and an older brother. When their father passed away, their mother had to raise all three of them by herself. Ross is also dyslexic. All these factors contributed to him being a sociopath. However, despite this impediment and challenges, Ross succeeded in life and became a Master Electrician. Ross served in the U.S. Navy as a Nuclear Power electrician for eight years. He is married and has two children. He also his life story with others and is active in community youth programs.