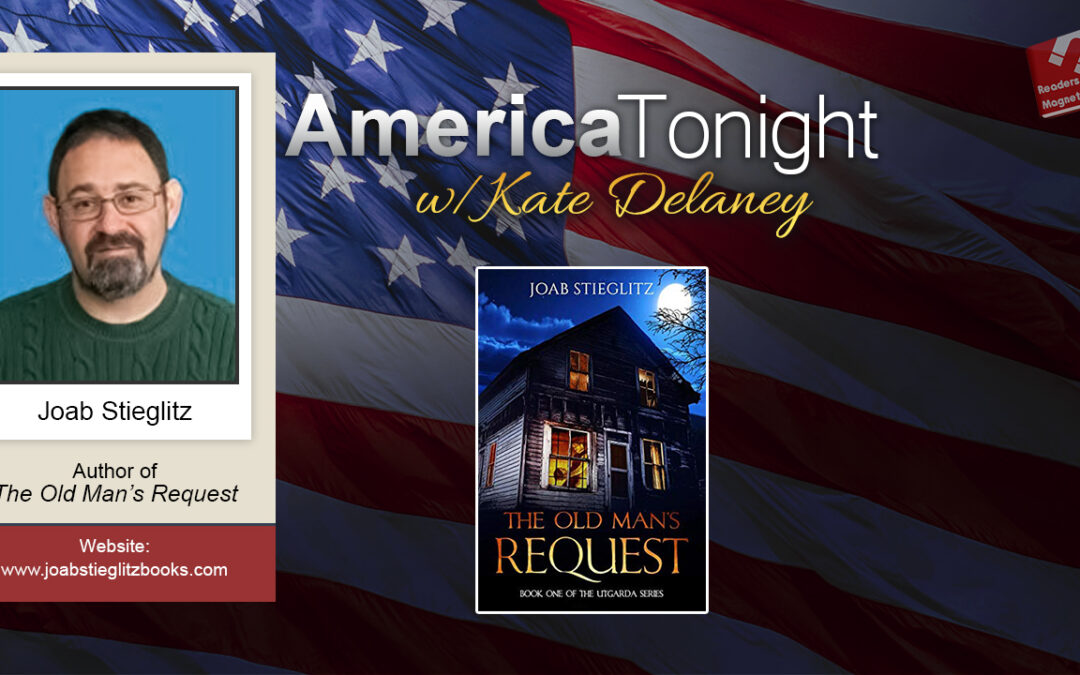 Are you an avid reader of supernatural thrillers? Then you’ll also love Joab Stieglitz’s The Old Man’s Request: Book One of the Utgarda Trilogy (Rantings of a Wandering Mind; 2018).

The Old Man’s Request is a Lovecraftian pulp adventure with a strong female lead. Set in the summer of 1929, this supernatural pulp adventure tells the quest of Russian anthropologist Anna Rykov, Doctor Harry Lamb, and Father Sean O’Malley to contain an evil entity that was released into the world by a cabal of college friends many years ago. The Old Man’s Request has been well received by Amazon and Goodreads reviewers.

Stieglitz followed up the series with two sequels, The Missing Medium and The Other Realm, and also started a new series, the Thule Trilogy, which currently has two books out, The Hunter in the Shadows and The Worlds I Know. He was recently interviewed by Emmy Award-winning journalist Kate Delaney for her nationally syndicated radio talk show America Tonight.

From games to books

Stieglitz is an avid tabletop RPG (role-playing games) player and game master of horror, espionage, fantasy, and science fiction genres, including Savage Worlds, Call of Cthulhu, Lamentations of the Flame Princess, GUMSHOE, and Pathfinder, to name a few. His skills and interests translate to publishing. He has published a number of books, including the Utgarda Series, the ongoing Thule Trilogy, and How to Be An Awesome Game Master.

“I’m an avid role player. I’ve been playing MMORPG (massively-multiplayer online role-playing game) games since I was a teenager,” said Stieglitz when asked about his inspiration for writing The Old Man’s Request. “In the nineties, I ran an extensive game called Call of Cthulhu and I took copies of notes of each two-week session, and some of those turned into series of books.”

The Old Man’s Request, explains Stieglitz, “centers around Anna Rykov, who is a Russian-American anthropologist in 1929 New York. She’s an expert in the Varangians or the Vikings who traveled into Russia. However, as a female professional in the 1920s who could be a communist, she’s having trouble finding a job. So, when the old man Jason Longborough, a trustee of a small college in upstate New York, offered her a job, she took it, and she’s been indebted to him.

Stieglitz described the main protagonist Anna Rykov as someone “who wants to be seen as an American, but she does have an accent.

“People view her as a potential foreigner,” the author said about his main protagonist, “so she has trouble in that regard. Longborough saw her potential and hired her, along with a couple of other folks who became her friends, a doctor named (Harry) Lamb and a priest named (Sean) O’Malley. No stereotypes.”

Fast forward a couple of years, Mr. Longborough was on his deathbed, and he has something that’s troubling his soul that he wishes them (Anna Rykov, Harry Lamb, and Sean O’Malley) to address. He found out they are uniquely qualified to address (the problem that’s troubling him).”

On genre-fying The Old Man’s Request

Stieglitz said The Old Man’s Request is not a horror story but more of an adventure story.

“Cosmic horror is what I would call it (the book The Old Man’s Request). Supernatural pulp adventure.”

On writing a book series

“Was it easy once you did the first one to realize ‘Oh, I have a series here. I could do a trilogy on this’?” asked Delaney.

“The first three were more kind of tied together,” Stieglitz answered. “At one time, they may have all been published under a single volume, a really fat book. But these days, you do a series, so it’s carved out into three pieces, kinda like Star Wars. The first book stands by itself, the second book in the middle, and the third one at the end.”

Ease into the world of cosmic horror with Joab Stieglitz’ The Old Man’s Request: Book One of the Utgarda Trilogy. Order today on https://joabstieglitzbooks.com/