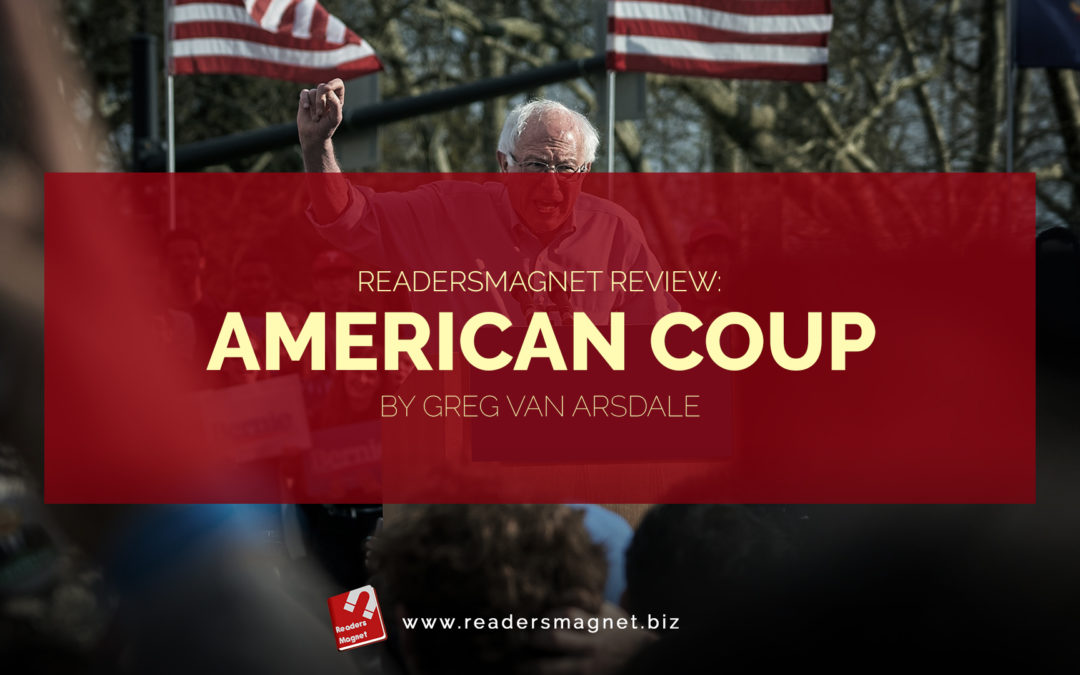 Many people love reading action books. These kinds of books just give people a different kind of reading experience – one that can pump their adrenaline, pound their pulse, and leave them on the edge of their seats. If you are one of those people who love reading action-packed stories full of intensity and excitement, then American Coup by Greg Van Arsdale is a perfect book for you!

American Coup is a story about a CIA rookie named Chuck Taylor who is assigned to deliver a letter to an operative in the field. Although the task seems like a piece of cake, what Chuck does not know is that this first assignment of his is going to be a bloody chaos. The letter that he is tasked to deliver actually contains a top-secret – an instruction to assassinate the President of the United States. Aside from this letter, there is a series of similar letters being handed around to different assassins assigned to kill the other five top executives in the government.

When the assassin he is meeting tries to murder Chuck, he defends himself and kills the man instead. This prompts Chuck to call his boss, Deputy Director Kranzton, for help only to find out that everything is a frame-up. Being accused as a traitor, Chuck needs to fight his way to survive and stop the assassinations from succeeding. With his girlfriend, Lisa Fontaine, by his side and with the help of other trusted people like Director Tom Bridges and Sandy Petowski, Chuck embarks on an intense and action-filled mission to hunt down the main culprits of the conspiracy.

Generally, American Coup is written in a simple but compelling language. Such language is simple enough for a high schooler to understand, but at the same time, it still possesses a certain kind of intricacy that manifests how well-informed the author is. The book has largely illustrated the nitty-gritty of politics and violence without becoming too technical to the point of losing the readers in detail and jargon. It is not difficult to read nor dull and boring. In fact, every chapter of the book seems to have something interesting to offer to the readers. The use of a simple but effective language essentially makes the readers hooked from beginning to end. It saves the story from having any baffling moment.

If there is one thing that is truly admirable about American Coup, it is definitely its action scenes! The action scenes in this book are generally detailed enough to make the readers feel like they are actually witnessing the scenes firsthand. Even so, such details are not given excessively to the point of dragging any scene in the story. To put it differently, the action scenes in the American Coup mostly shows the things that are happening instead of explaining them. The author basically followed the golden rule in writing action – show, don’t tell. In essence, the well-crafted action scenes are largely one of the reasons why the book is compelling and exciting in its entirety.

Another reason why American Coup is a compelling read is that it has quite interesting subplots. Particularly, the subplot involving the romance between Chuck and Lisa makes the story less heavy and more enjoyable. This subplot somehow created a balance in the overall story. It prevents the book from being too focused on action to the point of lacking relatability. The subplots essentially make the story of American Coup relatable to more people of various tastes. Aside from the fans of action and readers of the crime genre, everyone who loves tension and entertainment can definitely enjoy this book.

Overall, American Coup is a great read for everyone who loves action with a bit of drama. This book by Greg Van Arsdale has the elements of a good action story that can leave the readers on the edge of their seats and engage them from beginning to end. Its use of effective language, well-written scenes, and interesting subplots make American Coup a high-quality action literature. It is an action-packed and well-informed book that oozes boldness and entertainment. If you have high expectations when it comes to action literature, then this Greg Van Arsdale masterpiece will certainly not disappoint you!