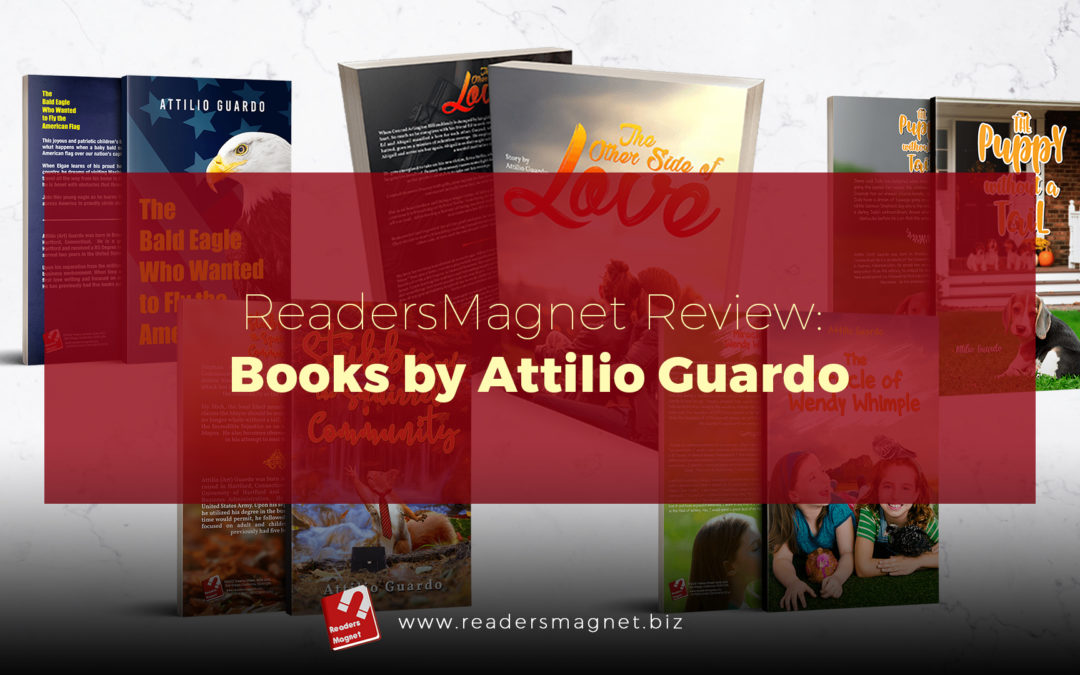 Attilio Guardo is the author of The Other Side of Love and several children’s books.

Attilio Guardo is an author and a painter. He was born in Brooklyn, New York, and was raised in Hartford Connecticut. Guardo attended the University of Hartford where he finished his Bachelor of Science in General Business Management. Shortly after, Attilio joined the U.S. Army. After his stint in the military, Guardo went back to civilian life and worked in the accounting and management profession. These days, Guardo spends his time writing books, painting, and playing with his grandchildren.

Guardo’s love for literature started at an early age. At age nine, Attilio wrote his first story, a 55-page novel entitled “Three Ways.” When he was still eleven years old, he also wrote a short play. However, it was not until recently that Attilio Guardo was able to make time to publish his works. Inspired by his grandchildren, Attilio decided to go back to writing children’s stories. In 2004, he finally decided to publish his first book, “A Special Time in Clear Creek.” And the rest they say is history. Let us take a look at the Attilio Guardo’s list of published works.

A Special Time in the Creek

Published in 2004, A Special Time in the Creek is Guardo’s first published novel. It follows the story of a 15-year old boy named Ollie, a resident of Clear Creek, Georgia. Ellie is infatuated with Melanie Jacobson, a new student from his school. Ollie thinks he is not that handsome so he hides his feeling for Melanie. One day, Ollie’s pet lizard causes a bizarre disturbance in their class which allowed Ollie to interact and strike a friendship with Melanie. A funny and delightful story about young love, A Special Time in the Creek is a young adult novel that every teenager can relate to.

Published a year after the first book, Halloween at Clear Creek is the sequel to A Special Time in the Creek. Ollie plans to set up a Halloween party to convince Melanie to visit Clear Creek. But before his plan can become a reality, Ollie must again deal with his old adversary, Corky Stevens, the boy who is also interested in Melanie. This time, Corky teams up with a new girl named Aggie Bard. For Ollie’s party to be successful, he seeks the help of his loyal friends and his German Shepherd, Patches. Melanie finally shows up and what follows is a series of surprises for Ollie and the people at Clear Creek.

The Bald Eagle Who Wanted to Fly the American Flag

“This joyous and patriotic children’s book truly soars as it explains what happens when a baby bald eagle is determined to fly the American flag over our nation’s capital. When Elgae learns of his proud heritage as the symbol of his country, he dreams of visiting Washington, D.C. To do this, he must travel all the way from his home in California. On the long journey, he is beset with obstacles that threaten his life. Join this young eagle as he learns the meaning of courage, flying across America to proudly circle above the nation’s capital.” (excerpt from Amazon book description)

The Other Side of Love

The Other Side of Love by Attilio Guardo is perhaps his most serious work. It is a suspense- love story. It follows a guy named Conrad who gets dumped by his girlfriend Abigail. Conrad vowed revenged and decided to enlist his friend Ed. However, his plan went sideways when Ed and Abigail fell in love. What follows next is a series of rage, deception, and tragedy. The Other Side of Love is a story of one man’s passion and redemption.

The Miracle of Wendy Whimple

Published in August 2019, it is a heart-warming tale of a young girl who despite being born with a twisted leg is blessed with a kind heart and the ability to heal animals.

Wendy’s mother left her in the care of a loving couple (aunt and uncle) after discovering Wendy’s deformity. While the couple knows about Wendy’s power, she hides it from the Pulo brothers who are mean kids who like to shoot songbirds. One day. One of the brothers got injured and they forced Wendy to heal him. However, Wendy realized he can only apply her powers to animals, and not to humans. Enraged, the brothers trapped her in the woods. Then something happened that will forever change Wendy’s life and those around her.

The Puppy Without a Tail

The Puppy Without a Tail is a tale about a puppy who has no tail. Sausage is among the five puppies that Jimmy and Jody’s Beagle gave birth to. The story centers on Jody’s dream. In her dream, Sausage goes on a journey to find the Magical Great White German Shepherd dog, the only one who can help him. In the dream, the tail-less Sausage must overcome several challenges in order to find what he’s been searching for. Published in 2020, it is a funny and delightful tale of a dog’s adventure.

Stubby and the Squirrel Community

Stubby and the Squirrel Community is a children’s book published in November 2019. It is a story of a squirrel named Stephan Rovernut who is a mayor of the squirrel community. One day, Stephan is attached by a hawk. Stephan survived the attack but lost his tail. This incident is viewed by another squirrel as an opportunity to discredit the current mayor and replace him. Stubby and the Squirrel is a mini-adventure that teaches us the value of responsibility and cooperation.