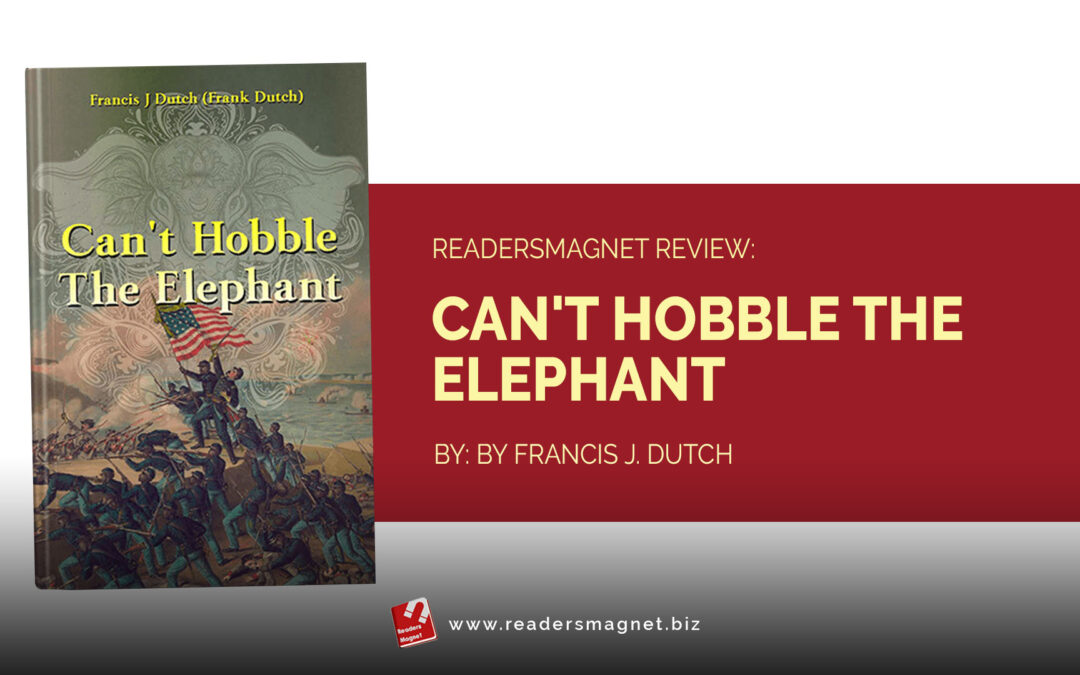 As a certified bookworm, you already know how literature and history are intertwined. The former sheds light on the historical events in a creative way, while the latter aims to chronicle the events as perfectly as possible. And, the American Civil War is a significant fragment of history that’s often illuminated in various literary works. Thus, the historical fiction genre was born to inform and inspire readers about the horrors, survival, and hope during those darker times. There are a lot of historical fiction books that showcase a great part of history and convey a significant message, but nothing tops Can’t Hobble the Elephant by Francis J. Dutch. That said, let us get to know this masterpiece better.

Francis J. Dutch’s historical fiction novel is a meaningful read that captures the real and violent part of history, specifically during the Civil War, mixed with a dash of fictional elements to fully teach and entertain the readers.

Can’t Hobble the Elephant is a remarkable book that highlights the story of a Union army escapee named Josh O’Donnell. He started fresh on a West Texas ranch, where he worked and learned to ride and shoot.  As the protagonist developed into someone more ruthless while enjoying freedom from duty, a dark cloud from his past started to haunt him. On his excursion with the other ranch boys, they arrived at Sugar Tap, Texas, where a friend and an enemy died.

Moreover, to escape the consequences of the event, he went on the run again to New Mexico, where he met a girl. When he thinks everything is going along his plans and he has escaped from the chaos, the monster of his dark past appears, and a bloodbath happens. Josh has no choice but to face and uncover his wartime secrets — as well as face the man he ran away from Sugar Tap.

Dutch did a great job of inflicting character development on the protagonist. It successfully helped the readers see the progress of events, from being a loyal Union army soldier to a fugitive with regression as a defense mechanism.  Apart from the stirring events that created tension, the way the author added a dash of romance uplifts the interesting factor of the story.

The meeting of Josh and Angel symbolizes love and acceptance that he never thought he needed and somehow diverted the heavy events. The temporary release of tension gives the readers time to breathe and summon relevant emotions for the conclusion. Furthermore, Francis Dutch impressively gave a satisfactory ending to Josh’s story, which gave justice to the preceding events. And, the most defining thing of this book is the wordplay on the title, which an efficiently transmitted to the reader, as per the 2014 review below:

“I had heard that Civil War soldiers called being in a battle “seeing the elephant.” But I did not understand what it really meant until I read this book. A true wordsmith, the author used the illustration several times in the book.” – Shirley Willar, Rochester, Indiana.

To sum it all up, Can’t Hobble the Elephant by Francis J. Dutch is a must-read book that doesn’t only tells the story of the Civil War but also of the violence and terrors during those times.

Francis Dutch, also known as Frank Dutch, is an excellent author and war veteran. He was raised in Philadelphia and served in Germany during the Korean War — specifically in army intelligence. Moreover, Francis finished a set of cumulative night school instruction, resulting in an MBA. At present, Dutch is a retired manager of corporate planning of a huge manufacturing company.