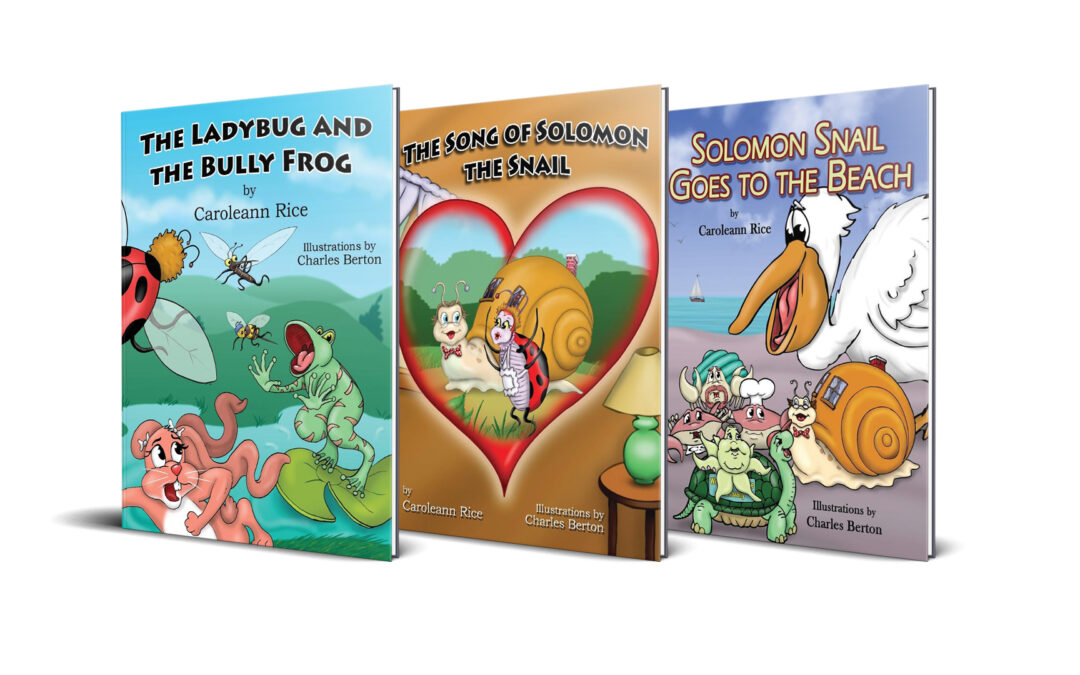 Caroleann Rice is a children’s book author and a chaplain. In the previous months, we have featured articles on her and about her works. Rice’s works are modern fables that feature unlikely animal characters, including a snail (The Song of Solomon the Snail) and a ladybug (The Ladybug and the Lady Frog). Aside from values that are typically incorporated in fables and children’s stories, Caroleann Rice also touches on religious themes and the Wisdom of God. Today, we will revisit three of Caroleann Rice remarkable works that have inspired readers, both young and old.

The Song of Solomon the Snail is a unique children’s story that contains certain biblical allusions (King Solomon the Wise). Published in 2017, The Song of Solomon the Snail is Caroleann Rice’s first published work. In this book, we are introduced to Solomon, a wise and all-knowing snail that the other animals look for wisdom and advice. They also run to him to settle disputes and other concerns. Solomon did not expect that he would be the wisest among other animals, but he was sort of destined to be one. Solomon the Snail travels slowly and likes to take his time singing his songs. The house is sort of a retreat and home to a secret voice whom he consults whenever someone asks him for answers. This secret voice is Solomon’s friend, the Mighty Wondrous Voice of Love (God). For her debut work, Caroleann Rice created a wonderful character and representation of God as a source of wisdom and reason. The illustrations in this book, as well as the rest of her works, are done by Charles Berton.

A year after the release of her first book, Rice then published The Ladybug and the Bully Frog. In this second book, the story centers on a ladybug and a bully frog. Near a pond, a community of animals lives and where everyone is friends with everybody. Their peace is one day disturbed by a bully frog named Milton. The animals are hesitant to play in the fond because of his presence. Milton is known to be mean towards other animals. The animals all agree that they need Solomon the Snail to intervene. Solomon the Snail is the wisest among all the other animals. However, in order to reach Solomon, someone would have to fly over Milton and go to the wise snail. The only one who can do that is Mrs. Ladybug. Clover the Rabbit then decides to call for Mrs. Ladybug’s help. The ladybug is known as Dot to her friends, and just like Solomon the animals also turn to her for help.

Solomon Snail Goes to the beach is the third and the latest children’s illustrated book by Caroleann Rice. It still features the characters from the first two books. In this 2020 work, Caroleann Rice takes us to the beach where the brothers Buster Crab and Sandy complain Big Bill Pelicanl\. It appears that the pesky Buzz Seagull and his brother Speedy are annoying everyone at the Crabby Shack, swooping down and trying to steal the food from the customers. The Crabby brothers are consulting with good Old Bill, who is generous and known to everyone as kind. But Old Bill knows that he doesn’t have the answers. However, he knows a guy that can certainly help them. He lives inland and known to many as Solomon the Snail. But even Solomon is not enough to make these seagulls behave. Solomon would have to enlist the help of his ever-reliable friend, the Wondrous Voice of Love.

Caroleann Rice’s books are all very light reads. The illustrations were done by Charles Berton also provide a clear picture of the story. The characters are very unforgettable, and the story plots in each book are easy to follow but put together, all three books can pass as a remarkable book series. Caroleann Rice has done a great job providing young readers with fresh content with values that are very familiar to us. We recommend her books to young readers three years old and above.