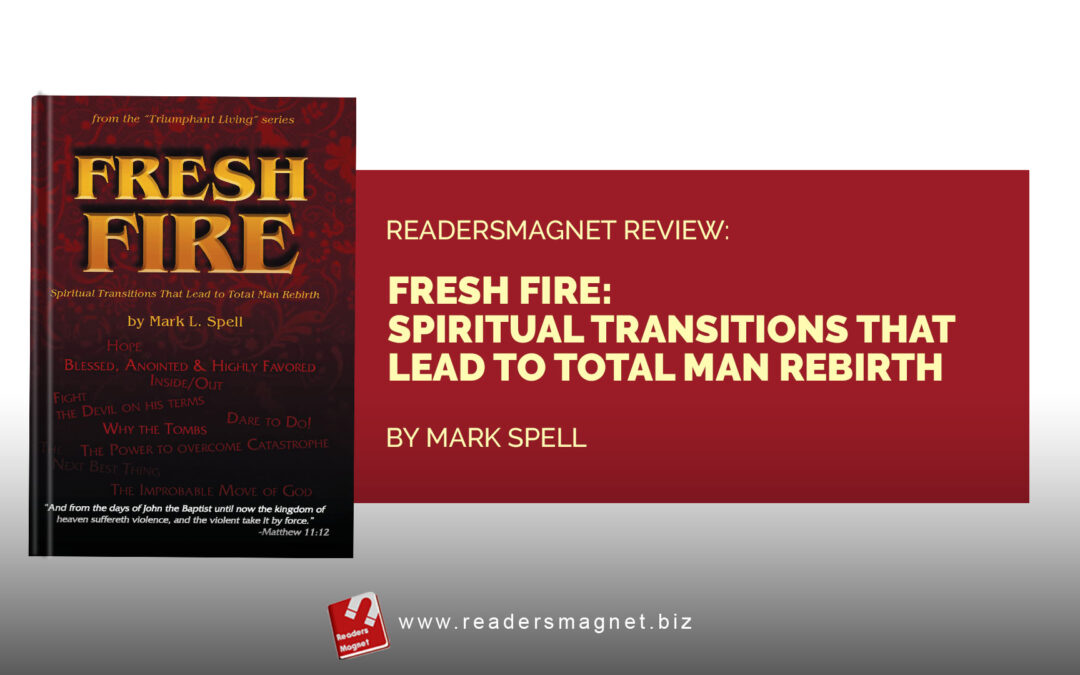 Fresh Fire: “Spiritual Transitions that Lead to Total Man Rebirth” (ReadersMagnet; 2021) by Mark Spell is a Christian non-fiction novella published by ReadersMagnet to inspire and help Christians in reaching their full potential as God appointed for us. The book talks about real-life applications of religion, bible scriptures, and personal experiences of individuals who found redemption through faith.

With Spiritual Transitions that Lead to Total Man Rebirth, Mark, pastor, and founder of Disciples of Christ Deliverance Ministries (DOCDM) has made it his mission to teach and expound the Word of God changing lives through teaching and prayer. When asked to describe his work, his wife Lillian states, “Holiness is definitely a lifestyle for him, and his desire to see others reach their full potential is always on his heart. He is a great example that God is still moving through his people in awesome ways.”

Fresh Fire was not only composed to help people, but also to explore how we can keep an open mind about spiritual rebirth, and later on, learn to incorporate it into our lives.

Taking a Leap of Faith. The idea of spiritual rebirth may be quite astounding for non-believers. Take, for example, the metaphor of a man who’s in love with a woman. How can we put our faith in love, when we can’t see it, or touch it. Belief in rebirth does not happen overnight. We don’t normally come to believe in rebirth all of a sudden, with angelic music in the background and blare out “Hallelujah!”. Now, “I’m convinced!” That isn’t how it normally works. Most people take a long time to adjust to the concept of spiritual rebirth.

Provisionally, let’s give the benefit of the doubt that there is such a thing by stating a verse in the bible. According to Romans 7:4, “Your husband, your master, used to be the Jewish law; but you died, as it were, with Christ on the cross; and since you are dead, you are no longer married to the law.”

Spiritual rebirth means dying to your old life to be reborn anew. And in Fresh Fire, Mark discusses and explains in detail with scriptural interpretation and reinforcement by the Holy Spirit about spiritual warfare, resolving spiritual issues, and many other topics that cleanse the soul.

Understanding Christianity. The fact that Christianity is polyvocal and multicultural contributes to a wide range of responses in terms of culture. These days, teachings of God’s Word and his power to do miracles through his Spirit are increasingly rare in the Non-Word-based ministries. On top of that, all other versions of Christianity are transformed to suit the popular culture and earthly desires of others (e.g., such as polygamy, divorce, abortion, the question of sexuality, and etc).

This is not to say that Christianity lacks a core and is completely influenced by its surrounding culture. On the contrary, at the heart of World Christianity is a story about God’s relationship with the world as told through the eyes of Jesus Christ. So, even if Christianity borrows a new language and tradition, the story of Jesus would still be the same in new cultural settings.

This also comes with the concept of spiritual rebirth. At first, some may reject the idea while others may gladly support it. With Fresh Fire, you can gain a better understanding of what true Christianity is, and how the Spirit of God works to bring all the scriptures together in your life. Through the Delivering Power of God opened in the pages of this book, you will discover a scaffold to that place in God where you understand the benefit of knowing— your dependable partner who is with you every step of the way.