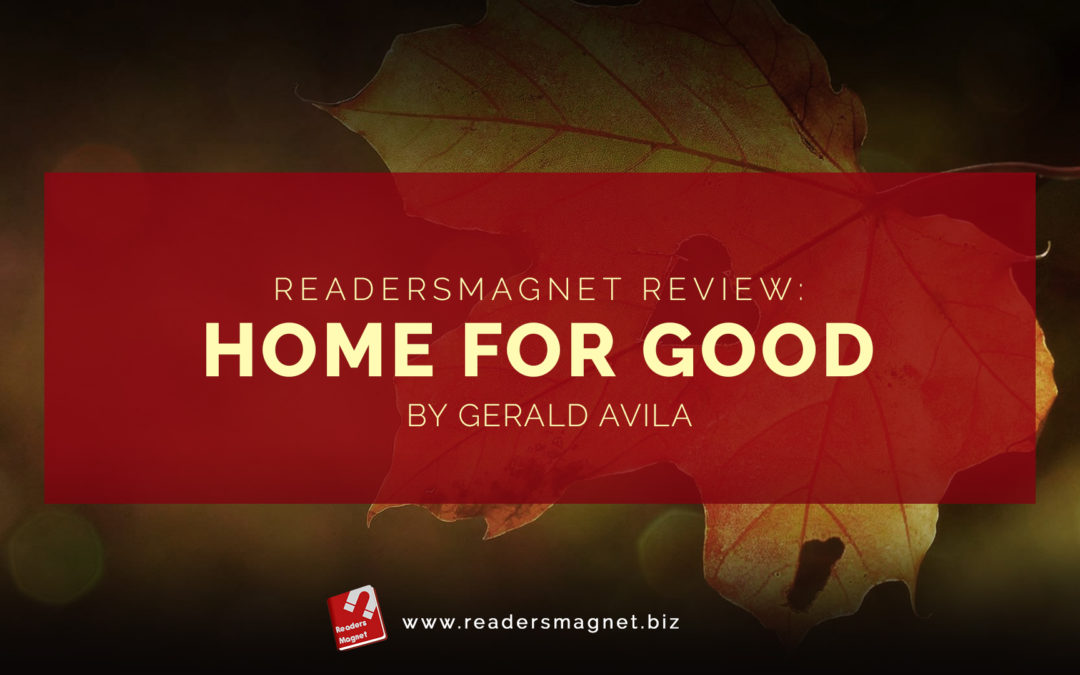 Home for Good by Gerald Avila is a romance novel by Gerald James Avila following his first book Table of Hearts.

Home for Good opens with the story of a talented writer Jeff Williams. Jeff used to live a wonderful life with his wife Marilyn who is also a writer. Everyone seemed to envy them as they were viewed as a perfect couple. But Jeff’s happy life ended the day he lost Marilyn. Marilyn died of cancer and Jeff is left devastated. The death of his beloved wife left Jeff in pieces and unable to come back to his old life. Their closest friends tried to comfort Jeff but none seem able to find success. Their close friend Alice is trying to bring Jeff back to writing and working again but still to no avail. At the time of Marilyn’s death, Jeff was working on a novel about the joys of his marriage and his magical life with his wife. With Marilyn gone, Jeff suffered a severe case of writer’s block. He is unable to think clearly and eventually, started to ignore his work. One evening, Jeff threw his typewriter from the window, as if a sign that he’s given up on his writing.

Determined to help her friend, Alice decided to seek help for Jeff’s writer’s block, with the hope that it would also cure him of depression. Alice then introduced Jeff to Dr. Joan Steele, a therapist. Joan soon learns that none of her conventional therapy methods seem to help Jeff’s condition. Dr. Steele decides a new approach is needed in order to get through her patient. Surprisingly, Joan’s unorthodox treatment begins to affect Jeff. Jeff is even surprised at the results. As their interaction continues, the two realize that they are falling in love. With Joan’s help, Jeff begins to accept the things that have happened to him. As Jeff his healing, he also begins to open himself to new possibilities. He gets back to his old self, drawing inspiration from his newfound love.

Home for Good is a pleasant and heart-warming read from start to finish. Avila is an expert in drawing emotions from grief to despair, and then to happiness. While there may be novels with similar storylines, Home for Good is unique in its way. Gerald James Avila has his own style of keeping the readers interested. It is a story that is simple, not too many characters or complexities involve, which makes it pleasant and in a way relatable.

Overall, Gerald James Avila’s Home for Good is a feel-good journey that is certainly worth reading.

To know more about Gerald James Avila and his works, check out his book, or visit his website today.

Born in the early 1940s, Gerald James Avila’s love for literature started when he was young. At three years old, James wrote his article for Reader’s Digest though it was unpublished. Gerald James Avila pursued writing and attended grammar school from 1951 to 1956. Despite not receiving too much praise for his writing, James soldiered on until he met an English teacher that one day would inspire Avila to dedicate his life to writing and to write his books. Jerry was set to attend the Los Angeles Art Center, but this was cut short because of the draft notice. He went on to Tobyhanna Army Depot in Pennsylvania. He went on with training while continuing with his education. Gerald James Avila enrolled at the University of Scranton and earned credits. On March 24, 1965, Jerry lost his parents to a car accident. He was only 22 at that time. Now, he lives with his wife Arlene. They have two grown children. Gerald James Avila is also the author of the novel Table of Hearts, his first book published in 2010.