ReadersMagnet Review: M.A. Haddad’s The Shadow of the Staff 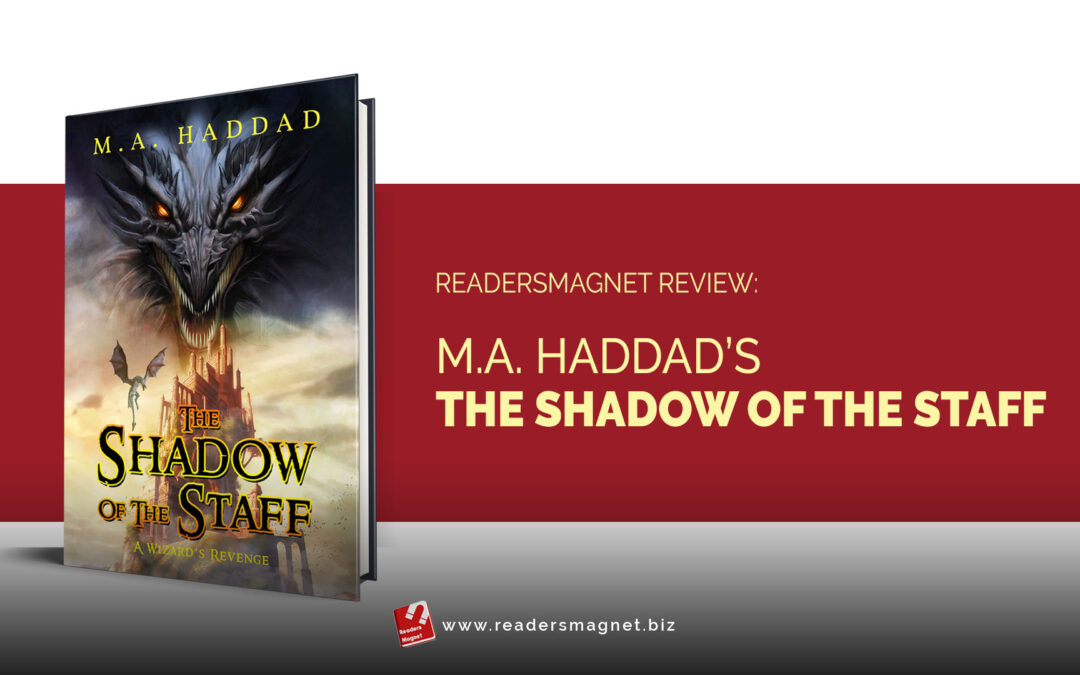 ReadersMagnet Review features the high fantasy novel The Shadow of the Staff: A Wizard’s Revenge by M.A. Haddad.

The high fantasy genre has always attracted readers throughout history. Since the release of J.R.R. Tolkien’s The Hobbit almost a hundred years ago (1937), many published works of the same theme and setting have been published. Some of the notable works under this genre include C.S. Lewis’s The Lion, the Witch, and the Wardrobe and the most famous The Lord of the Rings trilogy by Tolkien. Recent works gaining critical and commercial success include G.R.R. Martin’s A Song of Ice and Fire (see Game of Thrones) and The Wheel of Time book series by Rober Jordan (Brandon Sanderson completed the last three installments). Today, ReadersMagnet Review will feature Mark Haddad’s The Shadow of the Staff, a high-fantasy novel gaining popularity among fantasy readers.

“Man does not learn from his mistakes and therefore is destined to repeat them.”

The Shadow of the Staff: A Wizard’s Revenge is the complete title of the 2011 high fantasy novel by critically-acclaimed novelist M.A. Haddad. It is the first book in an upcoming series he is currently working on. The Shadow of the Staff introduces us to the mythical continent of Hatu and the magical creatures that inhabit the magical realm. The story revolves around the adventures of Master Burton Brew, the descendant to have carried the Great Staff of Power. The Shadow of the Staff also provides the backstory that happened three thousand years ago when Hatu was settled by Dwarves, Elves, Men, Wizards, Orcs, and Trolls. Early on, an evil army led by the wizard Porttia threatened all of Hatu. Porttia was defeated when his Great Staff of Power was unmade by the Great King, Master Milton Brew. The war and victory are commemorated every five hundred years by the Elves of Fallquint and descendants of those who fought against Porttia. The peace and tranquility of the land will soon be replaced with fear and disaster as the festivities draw nearer. Master Burton and his mentor, Tordin, find ominous signs of marauding Orcs. An army has overrun the Dwarf homeland of Rolling Hills as a new power has arisen to threaten Hatu again. A vengeful wizard named Maloneaous has rallied Orcs and Trolls to spread darkness and evil throughout the land. Now Elves, Dwarves, and Men must set aside petty differences to survive this new evil that threatens the balance of life in Hatu. The last of his kin, Burton must also rise above his fears and become the hero and rightful wielder of Warlight.

“Burton and his new allies endure increasingly dangerous skirmishes with orcs, and many other obstacles as their personal missions and intentions become intertwined with the uncannily threatening force that drives their foes – one that has shown its sinister face once before in the legendary days of old, remembered only by the select few who still retell the myths and stories of those that came before. History repeats itself before their very eyes as Burton, and his comrades unravel mysteries about themselves, their heritage, and their individual roles in the conflict at hand as they progress towards their goals in the face of an ever-increasing threat to their people, their realm, and their collective freedom.” – excerpt from RM book review.

The Shadow of the Staff: A Wizard’s Revenge is filled with many remarkable characters and a refreshing storyline as high fantasy plots come. As can be expected from a saga that presents a whole new realm and multitudes of heroes and villains, A Wizard’s Revenge is just the first part of M.A. Haddad’s exciting magical adventure. Book Two, The Shadow of the Staff: Tomorrow is Just a Day Away, is set to be released in the spring of 2021. Fans can expect more intrigue and excitement in the fantasy world of Hatu as unforeseen complications for all the races of this magical land result in personal sacrifices, and other revelations unfold in this epic journey.

M.A. Haddad is from Toledo, Ohio. Haddad had joined the Civil Air Patrol of the Official Auxiliary of the United States Air Force. He distinguished himself well and has earned several awards and commendations. Haddad also co-founded the State of Ohio’s Non-Commissioned Officer Preparatory Course.

M.A. Haddad is still an active member of the Auxillary. He has been in the program for almost five decades. As a Senior Member, Haddad wears the rank of Major. Haddad retired after almost twenty-five years in the national service. He is an active volunteer for the Red Cross and other locally-based community programs.