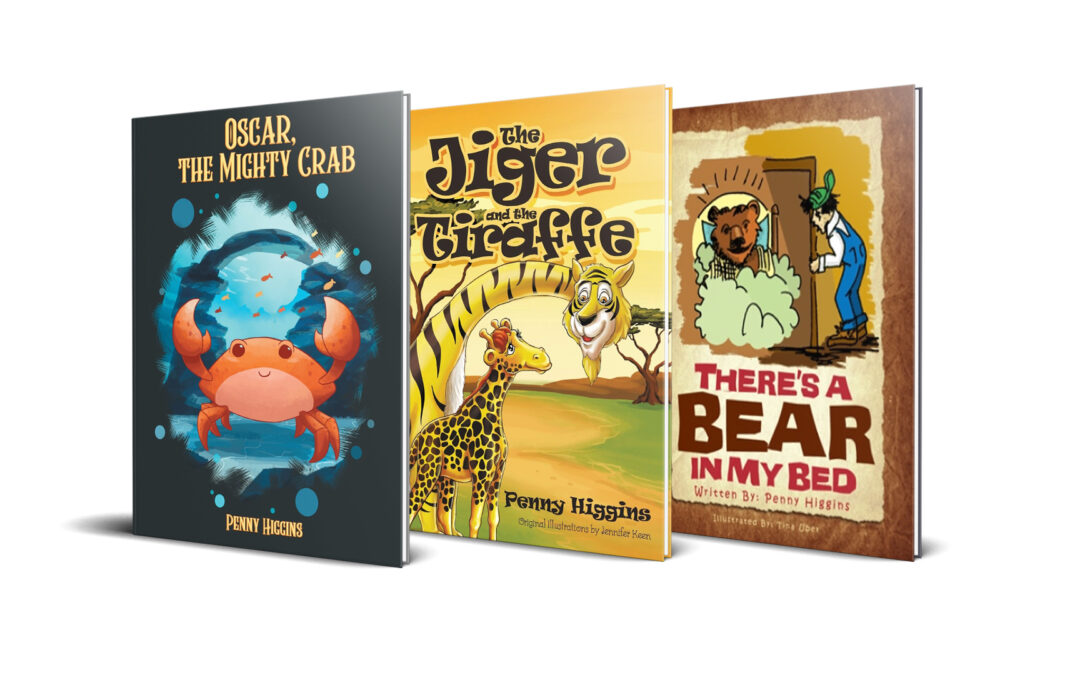 Modern animal storybooks are sort of modern fables. They feature animals as main characters, and their adventures and tales leave us with lessons and wisdom to ponder on. Penny Higgins has been writing animal stories since 2010 and has published three. Today, we are going to learn about ocean animals on Penny’s book Oscar, The Mighty Crab. We will also discover the God’s grace in The Jiger and the Tirraffe and solve the mystery in There’s a Bear in My Bed. ReadersMagnet features children’s illustrated books by Penny Higgins.

There’s a Bear in My Bed

There’s a Bear in My Bed is a 2010 children’s illustrated book written by Penny Higgins. The books consist of 24 pages telling the story of a kid who thinks that there might be a bear inside the bedroom. This is Penny Higgins’s first major work. The book is designed for children five to six years old. Animals are central characters in Penny Higgins’s works, and this one centers on a bear. The story is reminiscent of the classic Goldilocks and the Three Bears. The book’s illustrations are by Tina Uber. There’s a Bear in My Bed would be the start of Higgins’s career in children’s illustrated books. Later she would publish two more.

The Jiger and the Tiraffe

A year after releasing There’s a Bear in My Bed, Penny Higgins went on to publish The Jiger and the Tirafe, another children’s illustrated storybook. This would be her second published work. The book also contains 24 colorful pages designed for five to six-year-olds. In this book, Penny shares the story of two friends, a tiger named Jiger and a giraffe named Tiraffe. The two discussed their fanciful origins and nature. Penny Higgins again shared her childhood passion which is poetry. Higgins digs deeper as The Jiger and the Tiraffe contains themes about God and uniqueness. Higgins delivers a poignant message that God loves children and that every one of us is special in His eyes. The illustrations in this book are done by Jennifer Keen.

Oscar, The Mighty Crab, is the latest children’s illustrated book by Penny Higgins. This 26-page animal storybook was published last 2018. Oscar, the Mighty Crab, follows a young crab who lives in the ocean bay. This is home to Oscar’s family and close relatives and his best friend, Crusty Tom. For Oscar, the bay is dull, and he longs for the surface or the “upper world” despite the fact that seldom do ocean animals go there. Oscar is attracted by the new discoveries that the surface world offers. He is most fascinated by the carnival with all its fun rides and bright lights. Despite being repeatedly hurled back at the bay, Oscar still hopes to enjoy the wonderful world of the surface someday. This underwater adventure story shows both the beauty of the bay and the amazing life that we enjoy on the surface and often take for granted. Oscar, The Mighty Crab, is Penny Higgins’s most celebrated work to date.

About the Penny Higgins

Penny Higgins is a children’s book author and retired teacher from Oregon. She obtained her teaching degree at Oregon College of Education in Monmouth, Oregon. The college has since been renamed Western Oregon University. Even after her retirement, Penny never ceased to share her knowledge with children, this time through writing. Her interest and passion for writing and telling stories began and at an early age. As early as seven years old, Penny already started writing her own lullabies and poems. Currently, she has three published children’s illustrated books under her name. These are The Jiger and the Tiraffe, There’s a Bear in My Bed, and her latest work, Oscar the Mighty Crab.

Penny Higgins currently lives in a small retirement community in her hometown in Oregon with her husband, Larry. The couple has two sons, five grandchildren, and a great-grandchild.

To know more about Penny Higgins and her works, you can purchase copies or visit her website today.