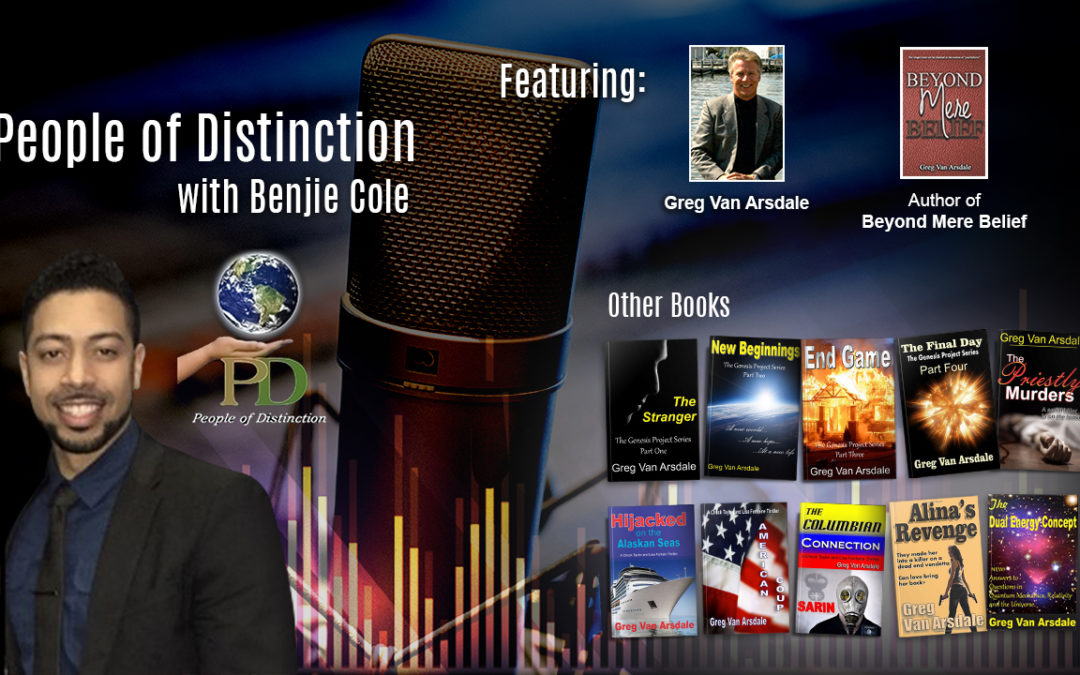 People of Distinction with Benji Cole (son of Al Cole from CBS Radio) features Greg Van Arsdale, the author of the book “Beyond Mere Belief: Advanced Christianity for the Intelligent Mind”.

I started out as a physics, and I went to Stanford University on a physics scholarship and was heavily recruited by the United States Navy to teach nuclear-related physics to their officers at their nuclear power school. I did that for a couple years, made lieutenant commander, and then became a training manager for a power company in West Palm Beach, Florida, and I did that for a couple of years. I was doing some great things, but it wasn’t my purpose here on earth. So I decided to become an editor and writer, and I’ve been doing that since 2003 now.

This book is designed to unchain us from the limitations of the just believe statement that is prevalent today, that says ‘we’re not supposed to understand that’. Growing up, I had all these kinds of questions- but only got these particular kinds of answers. This book answers theological questions in a brand new way, focusing on scientific proof that there is a non-comic form of energy in the human realm- I wrote about this in my book ‘The Dual Energy Concept’ before I wrote ‘Beyond Mere Belief, which is thought-provoking and sometimes controversial. While there is always a need for faith, this book is critical for solving people’s doubts, no matter what their beliefs are.

The inspiration behind it all

Most of these spawned from the development of The Dual Energy Concept, where it was proven in 1999 that 96% of our universe is of another form of energy. If you look up at the night sky, only 1% of what you see is reality. The other remaining percentage has to be dust. What is the true reality here of what we see touch and feel? This concept explains many scientific things, and also has its own version of ‘just believe’ called ‘quantum weirdness’, something they used to refer to phenomena that they couldn’t explain or something that the human mind couldn’t comprehend it. I was still nagged since it needed application, and the inspiration came when I realized I could apply it to Christian theology. Religion can be used as a weapon in many cases, so I don’t focus on religion at all- just Christianity. My inspiration was God-directed, burning in my soul, and I had to get this out.

It was just something that I had to- it was my purpose for being here on earth, and I really believe that. I have done what I can to put a fingerprint on the earth with my message.

How readers react to the book

The young high school and college types really eat this up- most of my responses come from them, as well as many Christians who use this work to reinforce their beliefs. Even spiritual, non-Christians benefit from this as well.