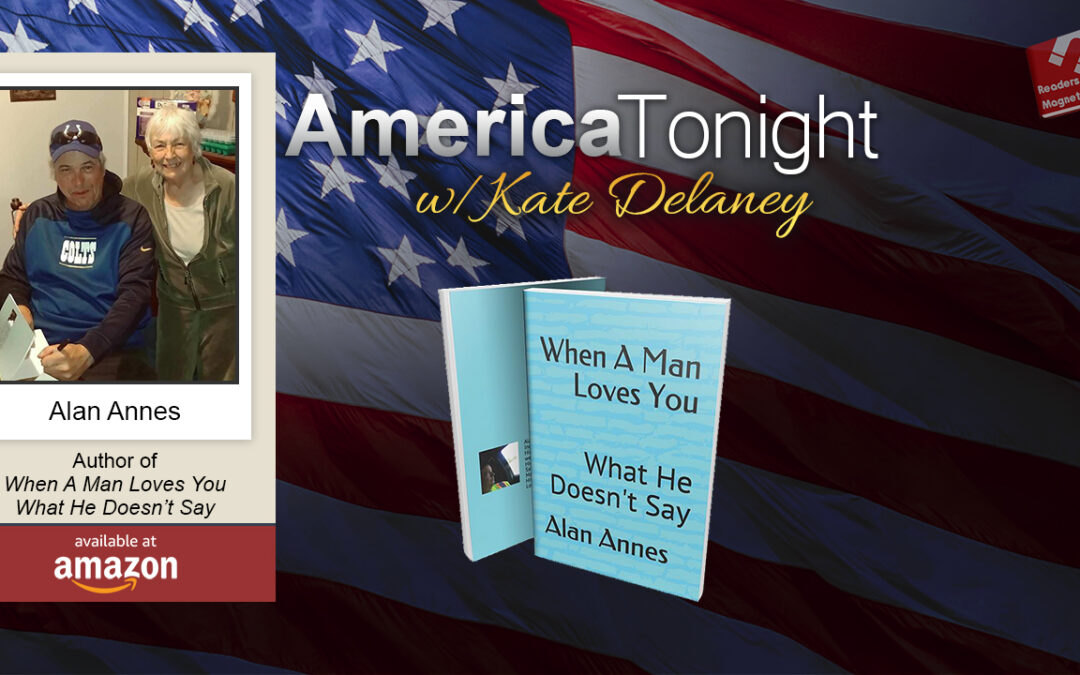 America Tonight with Kate Delaney features Alan Annes, an up-and-coming poet, and author of the independently published collection of short poems When A Man Loves You: What He Doesn’t Say.

Alan Annes moves from just being a voracious reader and blue-collar worker to becoming a published author; having independently-published his first book, When A Man Loves You: What He Doesn’t Say, is the peak of his life.

It is natural to say that Alan would someday follow the course of an author’s career. He grew up reading many books about everything, from science to music and romance novels to comic books. He also enjoys watching movies ranging from action flicks to romantic comedies. So, it is no secret where a man with diverse literary and movie tastes gets his inspiration for his poems.

Alan recently appeared in the Author’s Corner segment of America Tonight with Kate Delaney to talk about When A Man Loves You: What He Doesn’t Say and his brand of poetry. Listeners will be quick to know that the syndicated radio host has previously interviewed authors, particularly poets, in her Author’s Corner segment. Kate mentioned that her father wrote poetry and added that she finds it fascinating to know what moves people to create poems.

“One thing that kind of drove me to this was something creative too and a way to express myself, maybe on paper; a different way besides drawing a picture.”

When A Man Loves You: What He Doesn’t Say has been well-received by readers for Alan’s genuinely fresh perspective of love. This collection of short poems offers readers a thorough outlook on dating, marriage, and the chemistry between man and woman, thus a thought-provoking and healthy way to explore one’s relationship.

Given When A Man Loves You: What He Doesn’t Say’s content, it is true to say that all the poems are about love – and there are more to come, Alan assures. Kate asked him about the reactions of the women in his life, given that he writes about love.

“Some of them have read them. They really like them, and of course, a woman like my wife would be curious whom I am writing this about,” said Alan to a laughing Kate. “I told her ‘Most of them I wrote for you,’ but I was scared.” He added that some of the poems in When A Man Loves You: What He Doesn’t Say were written years back, especially when creativity kicks in.

“I ended up having papers all over the place, just different places. When I decided to do a book, I was digging around to start to put them all on the computer.” Alan believes he still has poems lying around somewhere; they could probably end up in his next book, should he publish a follow-up.

Alan makes it sound like poetry is the language – or could be the language – of the tough but reticent man. If a tough and proud guy could tell the woman of his desire about how he feels toward her, he might feel relieved of stress. Alan acknowledged that most men are scared to admit their feelings to women because they do not want to get hurt. Men could turn to poetry, thinking and expressing themselves on paper to help them deal with their feelings.

Learn more about what Alan Annes has to say about his brand of poetry. Make sure to listen to the whole interview.

Order Alan Annes’ When A Man Loves You: What He Doesn’t Say today on Amazon https://www.amazon.com/When-Man-Loves-You-Doesnt/dp/1701148935/