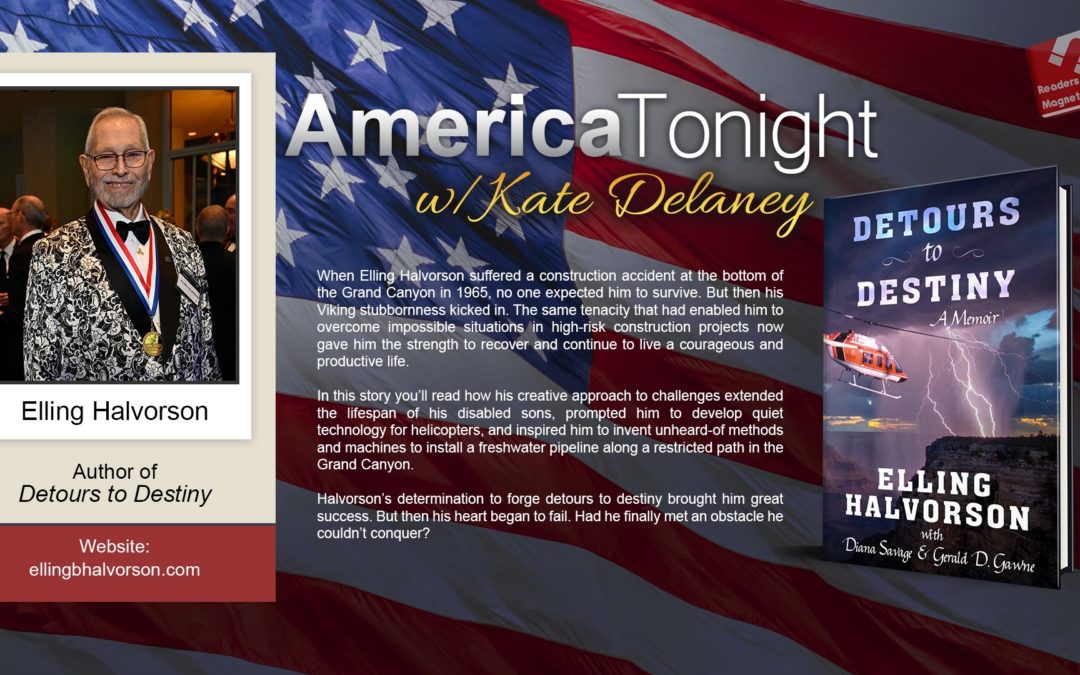 America Tonight with Kate Delaney features Ellington Halverson, the author of the book Detours to Destiny: a Memoir.

In this interview, Elling Halversondiscusses the countless challenges he had faced during his ordeal and all throughout his career- mainly his work at the grand canyon installing pipe systems. Aside from this, Elling talks about his progressive innovations in freshwater pipe installation and quiet helicopter technology.

Surveying the landscape for pipe installation

In this portion, Elling describes the way he observed and took note of the contour and geography of the landscape to determine the placement of the pipes. He explains that the backfill material was one of their main issues- a federal specification that had to be met, which would’ve been too expensive and impractical to have flown in by helicopter. Elling then realized that the backfill was right beneath their feet- they just needed a way to process it. He returned the next day after sketching out the blueprint for a drilling machine that they proceeded to create and utilize to systematically form holes in the canyon with dynamite. His contraption worked perfectly.

The Detour and the flood

The flood had immensely reformed the interior of the canyon, moving boulders the size of cars throughout the area. All their equipment was destroyed. Elling describes how their job was to guarantee six hundred gallons of water at the end of the pipeline. By the time the flood came, the pipeline had been full of water. 8 and a half miles of the pipeline was destroyed by the flood, as well as several bridges they had built. Their project was completely destroyed. The government had told them that since it was an “Act of God”, it was the contractor’s responsibility to pay for the damages and replace the pipeline without any cost to the government. Elling and his team strongly opposed this, proceeding to consult his attorney and taking legal action. The government’s defense was that the pipeline was placed in the wrong location.

They continued to argue throughout the summer. In the fall, they received news that Elling would cover the charge of replacing the pipeline- to their dismay, he added that they’d have to replace the way the canyon was at the time that he had built it.

What Elling wants readers to take away from his book

Elling describes how his life has always been full of problem-solving and overcoming challenges. His two disabled children were determined by doctors to not live past their mid-teens. This news left him and his wife devasted. Miraculously, one of his children is currently sixty-three years old, however, they had lost their other child due to liver cancer a few years prior. Elling always overcame obstacles such as these. Elling pours out his emotion and determination in his powerfully inspiring book titled Detours to Destiny: A Memoir.

For more information about Elling Halverson’sDetours to Destiny: A Memoir, visit the book’s Amazon page here at https://www.amazon.com/Detours-Destiny-Memoir-Elling-Halvorson-ebook/dp/B07JM3TSD5 .

This radio interview was made possible by ReadersMagnet’s book marketing services. Visit our Official Website: https://www.readersmagnet.com.