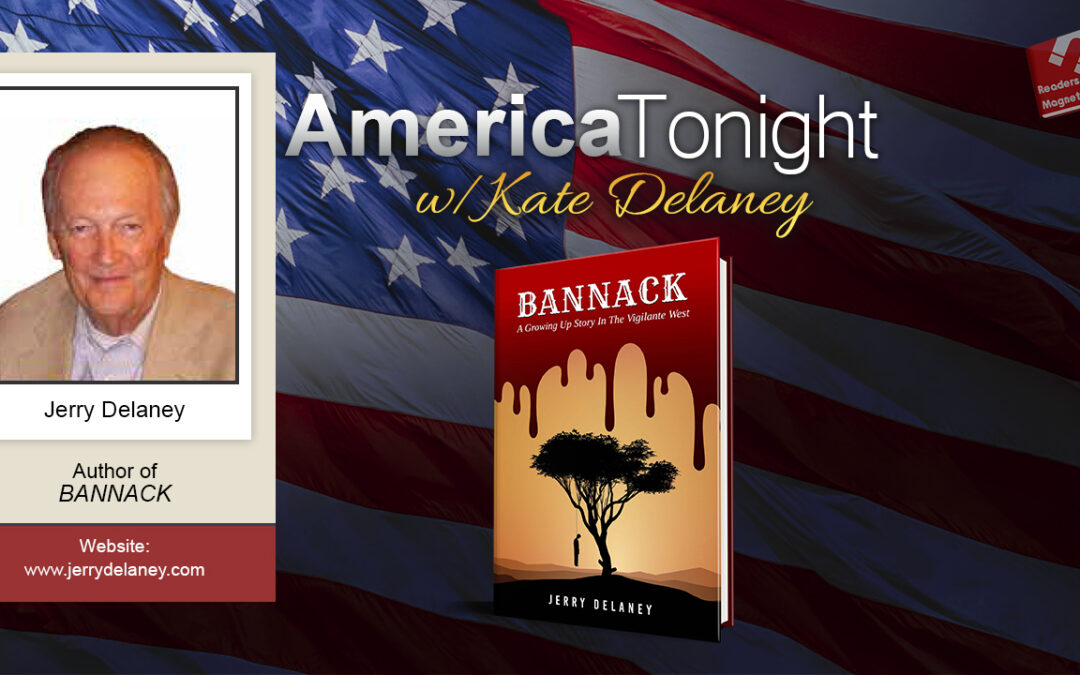 America Tonight with Kate Delaney features Jerry Delaney, author of the book “Bannack: A Growing Up Story in The Vigilante West”

In this interview, Kate Delaney interviews author Jerry Delaney (who is no relative)as he talks about his upbringing, the inspiration for his book, American history, and the magical charm of a well-composed, historically-accurate Western tale.

I grew up in Montana,  lived there from seven to seventeen. I went to grade school and high school there, then I left at the end of my sixteenth year. My father took a job on the war crimes trials in Tokyo, so we moved to Japan. What I can compare is growing up in Montana with living  in Tokyo and beyond, in Washington DC and  then New York from seventeen onward. . It was the big pivot, the great change  in my life. Montana was beautifulof course. We lived at the foot of Flathead Lake with the Mission Mountains five miles to the east of us, with the lake in front of us and the Rolling Hills to the west – gorgeous place. It was my  foundational place in life.

His father’s involvement in the Tokyo Trials

We had just emerged from the Second World War, and there was a deep sense of triumph. The Nuremburg Trials took place and then the Tokyo Trials, and my father specifically was on the prosecution staff therein Tokyo, trying to establish international laws that would prevent future wars. And we know alas what happened to those ideals. . But at the time, it was a joyous  period and  it contributed to our sense of identity as a country, to feel right and powerful and trustworthy,  But it also left us with the idea of exceptionalism and this has been very destructive.  So we are  left with a feeling of having betrayed  our most basic  ideals..

Bannack was a mining community that opened in 1860 when they discovered gold on Grasshopper Creak, and it immediately became very fruitful. It produced a lot of gold, and attracted an influx of people from the east and south. My main character, a young sixteen-year-old lad named Billy Mayfair, comes up to Montana from his hometown in Illinois to work in the mining camp. It’s a great adventure story. Hitchhiking by wagon from Illinois to St. Louis and working in a union hospital during the Civil War, then taking the steamer two-thousand miles up north to the mining camp in what would soon be Montana territory.

Jerry’s thoughts on the Civil War

It was a distinct period of American history of course. In my book It gave birth to the vigilantes for one thing, and that’s what really turned me on the story.. I had grown up in Montana and had been taught in school that vigilantes were great heroes in the West, but I discovered that it wasn’t true, and that knowledge prompted  me to write the book.

It’s basically a book that does two things – on one side it’s a coming of age story, an adventure story in which Billy Mayfair is kicked out of his home by his father, so he decides to hitchhike to St. Louis and work in a Civil War hospital. He then takes the steamer north to Montana and works in the hard-drinking and hard-fighting town of Bannack, which grew up overnight. He becomes witness to the vigilantes rounding up twenty people and hanging them within a month’s time. He gets to know not only the vigilantes but the people who were hanged. On the other side, the  story is a seriouse xplanation of how official  history got it wrong. . It’s an example  of  how history can lie to us.

Jerry on the vigilantes

The vigilantes incidentally were all masons. They were stalwart  righteous people who saw an opportunity to turn that territory into a political state.  In  their  arrogant  righteousness, they hanged all these people who were mostly rough-necks hanging out in saloons and  cursing in front of the ladies – not people you’d go  out for dinner with, but people who were charged with murder  when they were actually innocent.

What Jerry want readers to take away from reading his novel

First of all, a lot of fun in reading it—it  is anadventure, but it is also the history of that time.Western history can be very interesting if it’s done right, so you have a sense of not only of the west, but how Western history has shaped American  history in general – the past is prologue, and the things that were happening then are happening now. So you have both the pleasure of the story and the icing on the cake, which is learning something newabout American and Western history, and how that has influenced our contemporary society.

Jerry on the possibility of writing another book

I’m getting  too old to research and write stories like that  now , so I’m just pleased that it’s received a lot of very nice compliments over time. I’m writing much shorter pieces now.  .

Purchase a copy of Jerry Delaney’s critically acclaimed book “Bannack: A Growing Up Story in The Vigilante West” here on the author’s website https://www.jerrydelaney.com/. This interview and review article was made possible by www.readersmagnet.com.