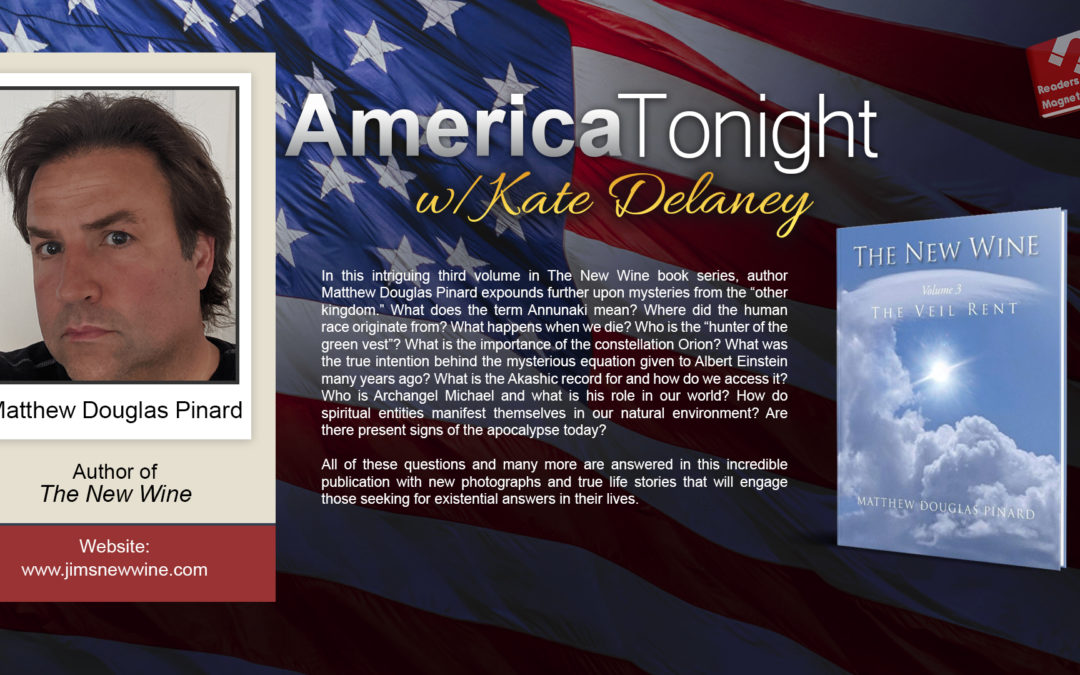 Who is Matthew Douglas Pinard?

Matthew Douglas Pinardwas born in Ann Arbor, Michigan, in 1974 to middle-class parents in a loving Catholic family. Matthew received his bachelor’s degree in psychology from the University of Michigan in 1996 and enlisted in the U.S. Army JAG Corps the same year. He received his Masters of Military History from Louisiana State University in 2002. He completed a writing apprenticeship at the Purple Rose Theatre from 2001-2002, writing for Hollywood Actor Jeff Daniels. (For more interesting details about his life, make sure to read The New Wine, published in 2017.)

What the book is all about?

The New Wine: The Veil Rent is the third book in the series after The New Wine and The New Wine: Peace Town. What is the inspiration for the book, as well as the book cover?

On a day after Christmas Day some time ago, Matthew went out to meet and pray with a friend’s cancer-stricken mother at a church in Michigan. On his way, he felt “this kind of charge of electricity” shooting right through his car. “The sun was out when it shouldn’t be,” said Matthew about that day. He then looked into the clouds and took a photo (which is the cover of the book).

“So, I started doing a lot of research. I’ve never seen anything like this in my life. To me, I can connect it to a prophecy from 95 A.D.” The prophecy Matthew refers to in the interview is the prophecy of the Woman of the Apocalypse (“The Woman clothed with the sun,” as termed by Matthew).

“The part that’s amazing to me is that the prophecy stated that when this event would occur, which I believe I documented with this photo that’s on the cover of the book that tremendous turmoil would be in the world. There would be a child taken up in heaven after a battle with a red dragon. The red dragon would then attack the remnants of the Woman’s seed, which, to me, is the human race, and it talks about fire and water being ejected through the dragon.

“The ancients looked at these kinds of things differently. You could easily count fire and water as floods, wildfires, and volcanoes, which we’re having in enormous amounts at the moment, not to mention the pandemic.

“The apparition of this Woman clothed with the sun, I believe from my Catholic faith, is actually Saint Mary coming to us from heaven because she knows we’re in a real state of turmoil at the moment.

“What incredible about this book is I just started documenting things that were then occurring in my personal life by starting getting really strong intuitions to pray.”

The story of Jayme Closs

The New Wine Volume 3: The Veil Rent contains the story of 13-year-old Jayme Closs, who in 2018 was kidnapped at gunpoint after her parents were killed in front of her in their home in Wisconsin. Matthew and his wife prayed the rosary for Jayme, who was held captive by her kidnapper for 88 days until she escaped.

“We both saw an image of a log cabin out in the middle of the woods. I saw an image of a dark-colored SUV going through the drive-thru of a fast-food (restaurant). I sent all this information to the FBI. They called me the next day. They were fascinated by how I could do this.

“Months later, it was documented in the book, I’m out here in Arizona for work. The sky just turned into this incredible sunset. I went home and said, ‘Something happened.’ Then I googled ‘headline news’ on my phone and ‘Jayme Closs found alive in a log cabin in Wisconsin. Her abductor is in custody.’”

The New Wine Volume 3: The Veil Rentals contains the story of Mollie Tibbetts from Brooklyn, Iowa, who was murdered by an illegal immigrant in 2018.

Listen to the whole interview LINK TO THE INTERVIEW