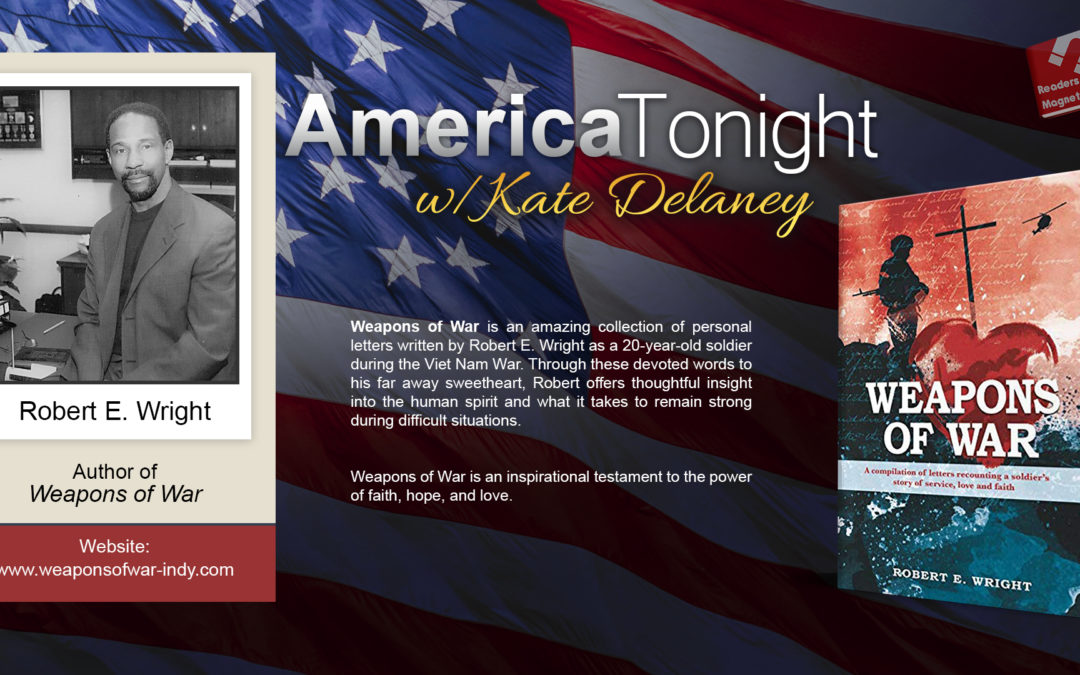 America Tonight with Kate Delaney features Robert Wright, the author of the book “Weapons of War”.

In this interview, Kate Delaney interviews Robert as he talks about the backstory behind his book, his tour in Vietnam, fierce battles with heavy losses, his life afterward, and the letters and notes written between him and his wife at the time that served as the inspiration for his book.

How it all began

In this segment, Kate asks Robert what prompted him to make his book. The author explains that back in 2017, he found the letters in his garage in an old container when he was cleaning the place- they were letters exchanged oversees between him and his wife at the time. He cleaned them up, put them in order, and decided to make them in into a memoir for his grandkids to know who their grandmother was (considering that some of her grandkids were born after she passed). Eventually, the memoir began looking like a manuscript, and someone suggested Rob make it into a book- which is exactly what he did.

The harsh reality of combat in the Vietnam War

Robert tells the story of the 90 day campaign in which him and his platoon were overwhelmed by enemy soldiers, with only 450 of men outnumbered and outmatched by roughly 40,000 Viet Cong soldiers. They endured many skirmishes and battles, and one night Robert was wounded by friendly fire at their base- the next morning he was extracted. From that point on, things took a turn for the worst- his platoon had lost over half of their numbers in battle with enemy forces. He mentions the death of one of his good friends names Draper, who lived not too far from Rob’s hometown. The two intended to stay friends after the war but, Draper, a field medic, lost his life on the battlefield with a Colt 45 in one hand and a bandage in the other.

Extended periods of combat and exposure to Agent Orange

Robert and men fought the enemy for 90 days on end, with clean socks every few days serving as the only article of clothing that they didn’t wear for the entire 90 day mission. These men fought in areas in which the toxic biochemical weapon Agent Orange was being used. Due to this, many of his brothers in arms who made it home alive went on to develop Agent Orange-subsequent diseases like Parkinson’s.

Humanness and lack of connection in combat, and unconditional love

This book is an example for all relationships- Robert explains that, if he and his wife were able to overcome obstacles from miles away (and in the middle of a raging war where death could be just around the corner) then there’s no reason that a modern couple facing similar issues and hardships can’t sort things out themselves. It teaches the concept of true, unconditional love. For those who appreciate a good love story and a good soldier story, Robert believes this book would suit them well.

For more information about Robert Wright’s “Weapons of War: A compilation of letters recounting a soldier’s story of service, love, and faith”, visit the book’s amazon page here at https://www.amazon.com/Weapons-War-compilation-recounting-soldiers/dp/1977088678 .