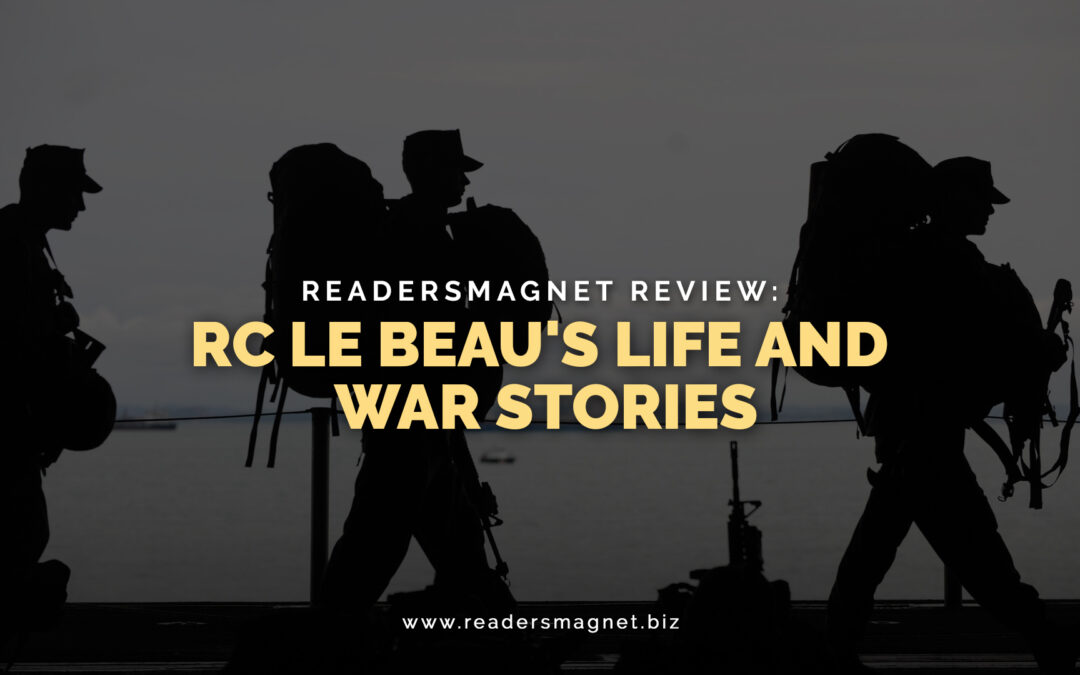 RC LeBeau shares his life and war stories when he spent 395 days in a warzone and its aftermath.

Author RC LeBeau is a war veteran. He was only 20 years old when he was shipped to Vietnam and assigned to one of the units that witnessed the horrors of that war- FLC unit or the Force Logistics Command. While the Force Logistics Command is not a striking force and composed mostly of non-infantry staff, they played a crucial role in the campaign. As a unit tasked with feeding, arming, and supplying the troops, they are also front-row witnesses of the war’s progress. Despite being non-combatants, in the strict sense of the word, their unit took part in the frontlines, especially during the TET offensive. Today, we take a look at RC LeBeau’s life and war stories based on his 13-month tour in the hellish Vietnam warzone.

RC LeBeau, fondly called Bob by family and friends, always wanted to be a Marine and be of service to his country. As a kid, Bob was a Cub Scout, a Boy Scout, and a Civil Air Patrol cadet. He had learned the basic skills and tactics of survival in the wilderness. Growing up, Bob’s interest in soldiering became evident. At the young age of 20, he joined the United States Marine Corp. RC LeBeau trained in Camp Le June, NC, did combat training twice at Camp Pendleton, Ca., Camp Le June, and then Okinawa. Before his 21st birthday, Bob found himself in Vietnam, in a middle of a raging war. The next 13 months would become life-changing for him, and stories that he has experienced or witnessed will forever remain in his heart until his last days.

Upon arriving in Vietnam, RC LeBeau was assigned to a Force Logistics Command unit or FLC. FLCs are units in charge of all supplies and making sure that they reach the units, especially those fighting in the frontlines. RC LeBeau was given a Military Occupation Specialty of 3041 (MOS). This code means that he is a part of the FLC working on manual accounting.

In the months the followed, RC LeBeau would witness first-hand the horrors of war. For 395 days, he would serve and work with heroes, warriors, and comrades in arms. He would learn many things during his agonizing tour in the war-torn country. He would experience the battles, the losses, as well as the small victories. One important event was the 1968 Tet Offensive of the Vietnamese forces. It was the biggest offensive mounted by the enemy, and many would not survive. Fortunately, despite being injured, RC LeBeau would live to tell his story of that Great Offensive.

RC LeBeau returned to the United States in March 1968, ending his 13-month tour after being injured.

RC LeBeau became a life member of the Fraternal Order of Purple Hearts. He is also a member of the 1st Marine Division and Veterans of Foreign Wars of the United States (VFW). Le Beau would later serve as the Allstate Commander of the VFW.

RC LeBeau pursued a civilian life. He majored in Business and marketing. He found remarkable success in marketing his patented products for the past forty year. He currently has four U.S patents under his name. After suffering a stroke in August 2017, he retired. He later wrote his war memoir Donut Hole: A Marine’s Real-Life Battles in Vietnam During 1967 and 68 Marines, 1st Force Logistical Command Clutch Platoon in which he details his life during the 50’s and the 60’s and his unforgettable life experiences of the Vietnam War. He penned his life and war stories using his right hand.

RC LeBeau, or Bob to his family and friends, was born in Detroit Michigan. As a young boy, Bob trained as a boy scout where he developed certain skills and tactics. They would later prove useful during his stint in the military, especially during his tour in Vietnam. He joined the United States Marine Corp at the tender age of 20 in the year 1966.His war biography Donut Hole chronicles his 13 months in Vietnam as a member of the non-infantry unit Force Logistics Command or better known as FLC units.

To know more about RC LeBeau, you can purchase a copy of his book or visit his website.