ReadersMagnet Review: So Much to Give by Carlton Randolph Crane 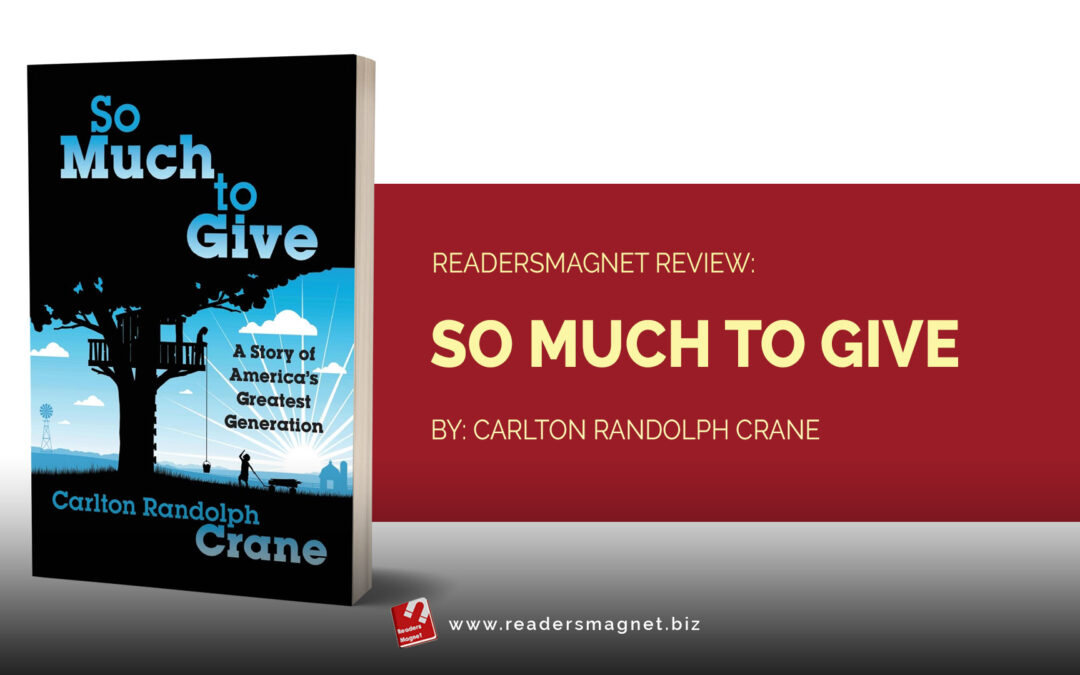 ReadersMagnet Review features Mr. Crane’s Historical fiction book about American families and the events that shaped them and their generation.

Carlon Randolph Crane served honorably in the United States Army Security Agency for four years when the Vietnam War broke out. Born and raised in the Piney Woods of East Texas, Carlton Randolph Crane’s childhood is rich with stories from the past. These stories are historical events that changed and shaped the lives of many American families, even the ones residing in small and remote areas such as Piney Woods. Today we will take a look at Mr. Crane’s Historical fiction book, So Much to Give, and travel back in time to a period that shaped America’s greatest generation.

So Much to Give: A Story of America’s Greatest Generation

Some of the most epic historical novels that have successfully told the history of a nation, a famous event, or a milestone of the past, have done so by telling the narrative from the viewpoint or story of a family. Carlton Randolph Crane’s novel reminds us of John Steinbeck’s The Grapes of Wrath or Margaret Mitchell’s Gone with the Wind. Both novels center on a family and a remarkable period in American history.

So Much to Give: A Story of America’s Greatest Generation is a family saga that tells the story of a small family from a small Texas town of Coalville. Their story is set during the difficult years of America. The 1930s were a particularly significant period in the country’s history. It was a period of great economic depression for both the young country and the world. Despite the happenings in the world- the rise of Nazism, Communism, Dictatorship, and other political upheavals- America stood firmly with Democracy. Collie family is among those the many families changed and shaped not only by the fiscal crisis and political changes but also because of the Second World War. The family kept their values and morals against hatred, racism, murder, and personal tragedy. The family endures the hardships and personal tragedies and chooses to become part of the nation’s great generation.

“With hands shaking, Cherrie opened the telegram and read it…Cherrie staggered backwards and banged into the wall of the house. She looked at Ruth with tears in her eyes but a smile on her face. “Momma Ruth,” she stammered, “he’s alive. He’s been wounded, but he’s on his way to a hospital in Hawaii. Momma Ruth, he’s alive.” The emotion overcame her, and she slide down the wall of the house and sat down on the porch. “He’s alive, Momma Ruth,” she repeated.” (excerpt from the book)

So Much to Give is an American literary classic in the making. Carlton Randolph Crane’s epic narrative vividly paints a picture of a family struggling to live with dignity, kindness, and tolerance in a society filled with lies, malice, and hatred. While America is thrown at war and social changes, the Collie family thrives with their loyalty, faith, and family love.

Overall, Carlton Randolph Crane’s So Much to Give: A Story of America’s Greatest Generation is one of those novels that only comes to us once in a decade or two. It is a rich, compelling, and beautifully woven narrative of great American history and a family saga with unforgettable heroes that make us want to do the right thing, like Harper Lee’s Atticus Finch or Steinbeck’s Tom Joad. So Much to Give is a genuinely heartwarming journey.