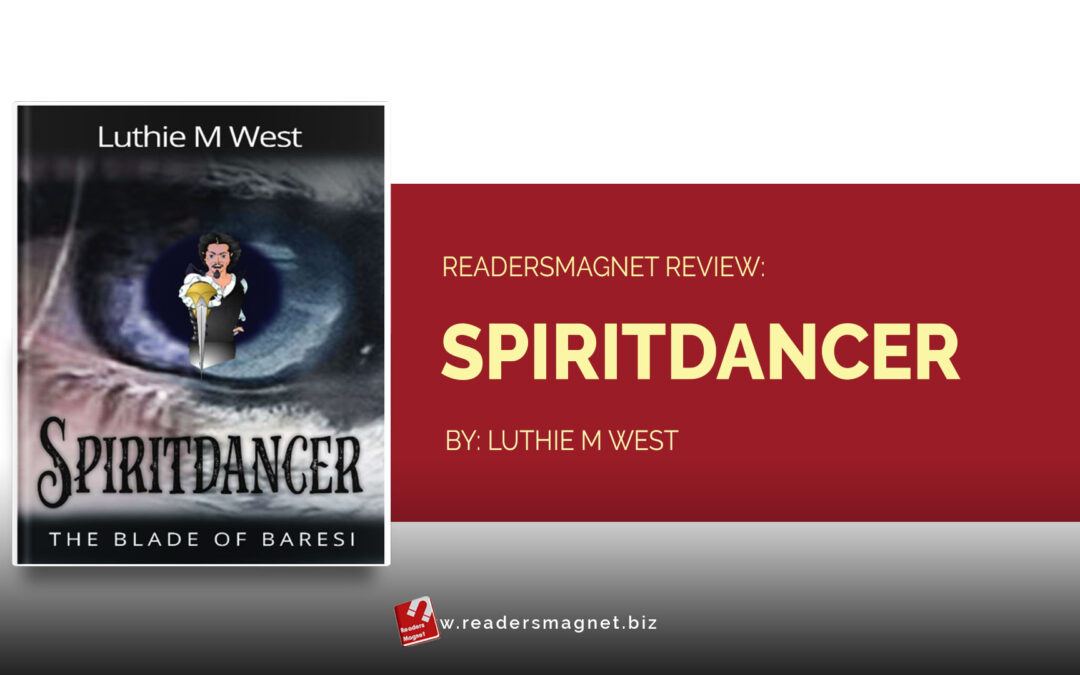 Luthie M West is a teacher and artist mostly known as the creator of Little Cabbagehead books and as the author of several children’s illustrated books. Today, we will feature Spiritdancer by Luthie M West. The book is a departure from her other works as it is young adult fantasy fiction.

Luthie M West surprises her audience with her debut work in the young adult fantasy genre. In Spiritdancer, the renowned author of children’s illustrated books introduces us to the world of Iasegald. It is the setting of an epic fantasy adventure, where sword and sorcery meet. The book was published last year and contains over 300 pages with illustrations by Luthie M West herself.

Spiritdancer: The Blade of Baresi follows the story of a Baresian swordsman named Kallias as he pursues his sister’s kidnappers. His pursuit leads him into the strange land of Marisko, where nearbeasts and sea monsters hunt men. Here Kallias meets the last of the rekinnder race, a beautiful changeling named Dealla. She accompanies him on his journey. Despite speaking a different language and belonging to an exotic race, Kallia trusts her. To prevent a local prophecy, Kallias trains a non-conventional army to help fight against the forces of the mad magician holding his sister. Will Kallias defeat the mad sorcerer and her minions? Will he recover her sister with the help of a strange new ally? Spiritdancer is an exciting magical adventure like you’ve never read before.

Luthie M West has created a new fantasy world with Spiritdancer, and fans can expect more fantasy stories from this world in the future.

The world of Iasegald is an entirely different universe created by Luthie M West. It has swordsmen, magicians, sorcerers, beasts, and monsters. Other races inhabit this fantasy world by West (such as the rekinnder race and several others). And with the level of excitement and adventure that LuthieM West provides in Spiritdancer, readers are expected to assume this is just the start of many adventures, not just for Kallias and Dealla but also for other characters in the feature. Spirit dancer itself is a remarkable epic adventure that kids will repeatedly read because of its unforgettable characters.

Overall, Luthie M West’s Spiritdancer: The Blade of Baresi is a fresh fantasy adventure that is light and enjoyable to read. ReadersMagnet recommends it to kids and teenagers.

Luthie M West is a Jack of All Trades. Luthie worked as a Luthie is as a teacher, an actor, and a director. She is the creator of Little Cabbagehead Books. She has had many work experiences throughout her life, including working as an animal trainer, dog groomer, lithographer, dental technician, and singer. She also once held jobs as a receptionist and waitress. She also has many interests which allow her to interact and observe people. She learned how to wield a sword and took time to study boatbuilding from discussions with a professional boat builder. These lessons helped her write her latest fantasy novel, Spiritdancer: The Blade of Baresi. When not preoccupied with her writing duties, she plays RPG video games and attends virtual parties. Still, Luthie M West’s number one passion is storytelling. She now has several published works under her name.

You can find Luthie M West’s books at Amazon, Goodreads, and Smashwords. You can also visit her official author’s website for more updates and information.