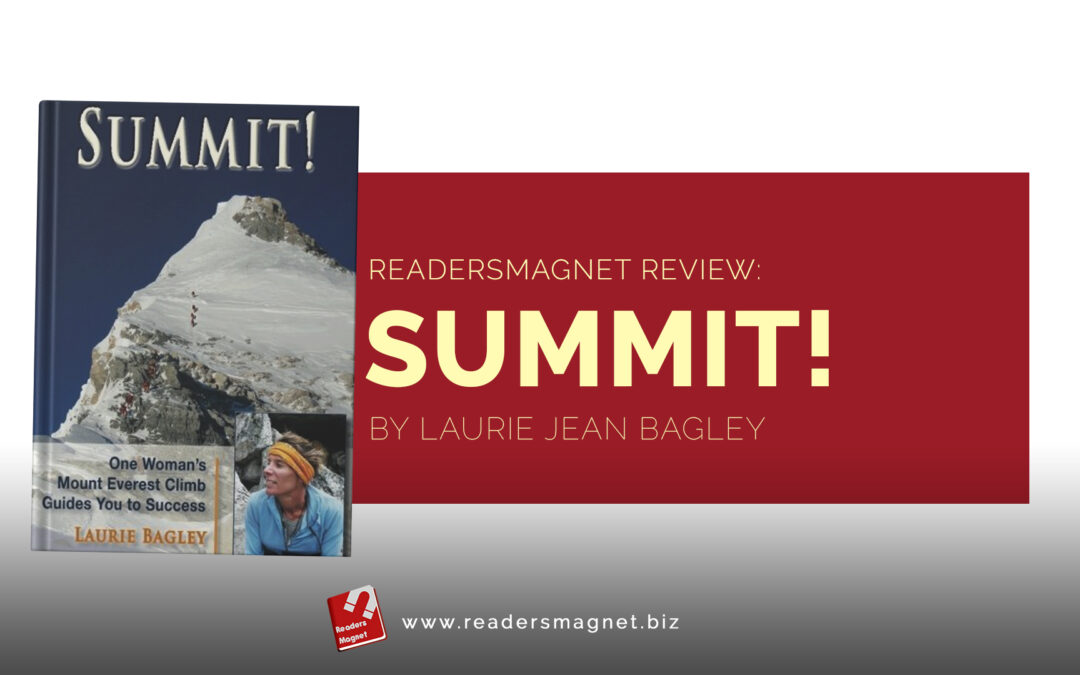 Human feats are always worthy of songs and celebrated. Throughout humankind’s history, we always revel in the astonishing achievements of better men and women. In modern history, conquering the humanly impossible such as circumnavigating around the world or climbing the highest peaks on the planet, are the most celebrated of all milestones. And author Laurie Jean Bagley just did that. As part of commemorating this year’s International Women’s Day, we will celebrate an amazing woman’s remarkable feat by taking a closer look at the book that documents her journey to Mount Everest- Summit! by Laurie Jean Bagley.

Summit!: One Woman’s Everest Climb Guides You to Success is a book by mother, businesswoman, coach, speaker, and outdoor adventurer Laurie Jean Bagley. The books features Laurie’s journey to the top of Mt Everest as well as other interesting stories. Published in 2020, Summit! is part memoir and part guidebook that hopes to encourage readers to embrace their potential, their passion, and their purpose in life. In this heartwarming and truly amazing work, Bagley shares his personal journeys and what she refers to as her “Mount Everest”. She took readers from an all-time low chapter in her life when she was diagnosed with breast cancer to her treatment and her sheer determination to embrace this “Mount Everest” until she conquers it.

In this 150-page gem, Laurie Jean Bagley imparts to her readers the importance of believing in oneself and conquering your own mountains. She reaffirms with each chapter that anything is possible with careful planning, commitment, and the right tools.

“In May of 2019, I was given a new and unexpected opportunity to jump in or hesitate. I made the choice to jump in with what I believed to be best for me. But I digress…let me backtrack a bit. I felt it important to add this chapter to the original book which was written in 2008. While climbing Everest and childbirth had been the most challenging events in my life, that suddenly changed. I was given an opportunity to climb a different mountain and feel that sharing my new experience may make your journey easier in some way.

When presenting or working with clients, I often say that we all have an Everest mentally, physically, and/or emotionally. My new Everest was breast cancer that was diagnosed in May of 2019. It took all the same skills, knowledge, and perseverance that I had acquired before and then some. I gained new tools and insights to get through treatment and to make the decisions I needed to make, with recovery and recurrence being the concerns.

In April 2019, I had a lump removed that appeared benign; at least that was what the mammogram and ultrasound indicated. Nonetheless, I asked that it be removed, and my doctor agreed. I just wanted it gone no matter that it appeared to be harmless. Once it was removed, the pathology report had different findings. The lab confirmed that it was indeed Cancer-stage 1B. I think my doctor suspected this as, during my surgery, he did an amazing job of getting all the margins. I, on the other hand, was completely caught off guard.” (excerpt from the book, 2020)

Throughout her life, Laurie Jean Bagley has conquered many mountains, literally and figuratively speaking. As a superhuman outdoor adventurer, Bagley enjoys summiting and climbing the most. Soem of the summits she has conqured inculde the Everest, Denali, Aconcagua, Peak Lennon, and Kilimanjaro. However, Mount Everest has the most impact as it opened her eyes to many possibilities and purposes in life. The humanly possible task of reaching the highest peak in the world and the challenges that go along with it made her see that anything is truly possible if one is willing to commit themselves. These realizations and she is able to apply the Mount Everest mentality in other aspects of her life such as business, motherhood, coaching, and public engagements are included in her book.

Summit!: One Woman’s Everest Climb Guides You to Success is not your usual memoir that celebrates feats and milestones. It is also a journal of one woman’s triumph in life, overcoming adversities by believing in her inner self.

Summit! is a timely and revolutionary read for all the women out there. Laurie Jean Bagley’s narrative is one that is full of inspiration, self-consciousness, self-improvement, iron will, and wisdom accumulated through all the summits and journeys she has been through. It is a worthwhile read that is both refreshing and amazing at the same time.

Laurie Jean Bagley is a mother, a businesswoman, and an outdoor enthusiast. Laurie Jean Bagley holds a master’s in Outdoor Adventure Leadership. Her interest and energy for the outdoors started as a young girl. She believes that getting fit and using what nature offers can help change behavior patterns that do not benefit us. Aside from her adventures, Laurie is also an achiever. Whether it’s fitness, health, race, coaching, or writing stories about the outdoors, her long list of accolades reveals her love for adventure. Laurie Jean Bagley owns the www.health-fitness-coaching.com, which focuses on helping others achieve their health, fitness, and wellness goals. Bagley also appeared in various magazines, radio shows as well as TV appearances related to her passion. Her biggest monumental achievements include climbing the summits of some of the world’s prominent summits, including Mount Everest and the publication of her book, Summit!.