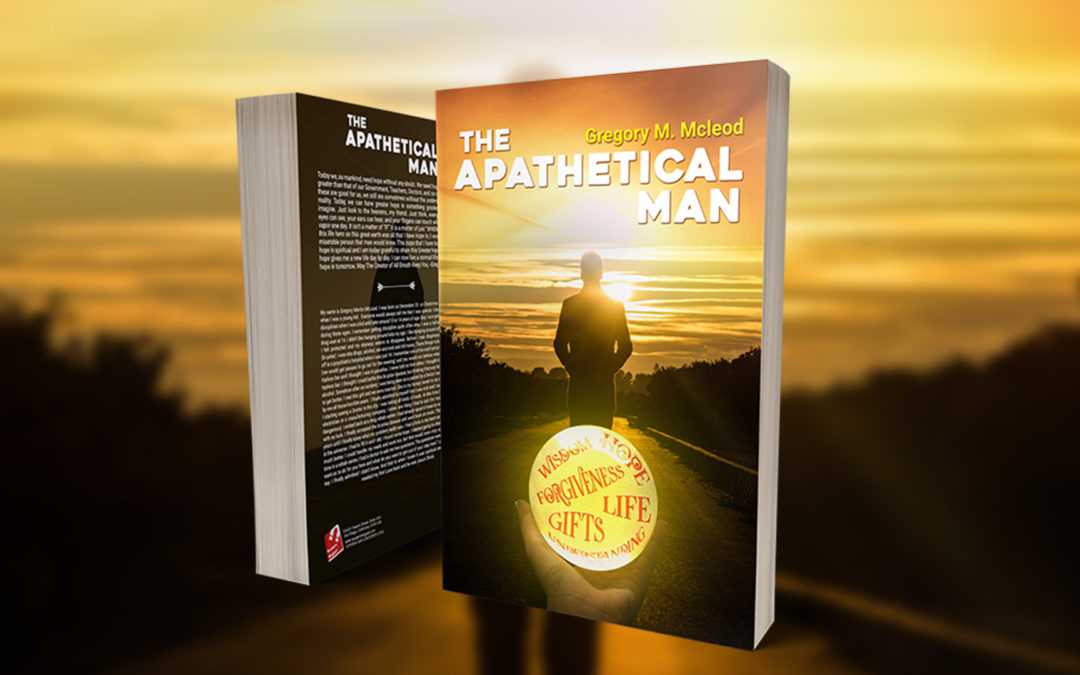 ReadersMagnet Review takes a closer look at the inspirational book The Apathetical man by Gregory McLeod.

Alcoholism and drug abuse affect millions of adults in the United States. According to the National Survey on Drug Use and Health (NSDUH), over 19 million Americans aged 12 years old and above suffered from substance abuse, with 74% also struggled with alcoholism. While many of them are institutionalized and submit to rehabilitation programs, a great number of them are unable to recover. Their lives are wasted and doomed. Overcoming drug abuse and alcoholism is not easy. Often, it requires subjects to submit themselves to therapy and admission to rehab facilities. It requires the support of family and community. But more importantly, overcoming alcoholism demands spiritual strength and guidance. For former drug abuser and alcoholic, Gregory McLeod, the battle is more of spiritual rather than physical. His book The Apathetical Man is a book about how to give your life away by Gregory McLeod. It istestament to his journey towards renewal and submission, peaceful years with God.

The Apathetical Man: An Inspiring Memoir

The Apathetical Man is a book written by Gregory Martin McLeod. In this 700-plus book, McLeod recalls his childhood, his first encounters with drugs and alcohol, his addiction and bouts with alcoholism, his numerous stint at various rehab facilities, and his journey towards recovery and redemption.

Born on December 25, 1964, Gregory Martin McLeod was a shy young boy. During his early years, Gregory did not have much guidance and discipline. It was only after he got into trouble around the age of 10 that he was reprimanded. By this time, Gregory already started hanging out with people older than him because he was very shy with people his age. When he was only 12 years old, Gregory began smoking cigarettes. This would eventually lead him to other stuff. In his early teens, he started drinking and using drugs. Eventually, Gregory became a full-blown alcoholic and was deep into drugs by age 14. He was drinking heavily and tried various kinds of substances including Valium, LSD, Quaaludes, cocaine, morphine, as well as weed. These liberties were also accompanied by sex and petty crimes as he also joined a gang. When he was only 16 years old, two things happened to Gregory. First, he was diagnosed with a bipolar disorder, and second, he was admitted to an institution for drug use for the first time. This would not be his last. Gregory was ordered by the court to be admitted to an alcohol and rehab facility with two years probation.

In his book, The Apathetical Man, Gregory detailed how his life began to spiral down after the first admission. He tried to see a doctor and submit himself to rehab only to go back to drugs and end up much worse than the previous admission. There was even a time where Gregory began taking medications to help him recover. But later on, he decided to quit on his medications because of his job as an electrician. This resulted in a major relapse and he was back in rehab again.

For many years, this has been the cycle for Gregory until his 10th admission in a facility. There, upon entering he was asked by the doctor two questions, “What do you want us to do for you here?” and “what do you want to get out of your stay here?” It was at that moment that Gregory realized that he needed to be serious about his treatment, or else he’ll end up back to where he was before, and worse. He also recognized the fact that his struggle is not mainly physical. He embraced the fact that his fight is more of a spiritual one and that he needed spiritual healing as much as physical healing. He needed someone to guide him through this journey of healing.

Gregory began a journey of renewal inside the facility. With the help of a pastor, he started acknowledging God as well as the people around him. He began attending meetings and small group discussions and complied with the rehab program, especially the 12 Steps of Alcoholics Anonymous. Eventually, Gregory was able to bring himself back into God’s grace and the society. As of this writing, Gregory Martin McLeod is more than 12 years sober and clean.

His book The Apathetical Man details this particular journey in his life. The book has 12 chapters filled with lessons, remorse, realization, faith, determination, gratitude, and God’s wisdom. The story of Gregory Martin McLeod is one that will truly inspire readers to take a second look at their life and see what’s missing.

Aside from his book, McLeod also shares his wisdom and experience via blogs and small group discussions.

For more information about Gregory McLeod’s The Apathetical Man, you can visit his author website or grab a copy of his book today.