ReadersMagnet Review: The Ladybug and the Bully Frog by Caroleann Rice 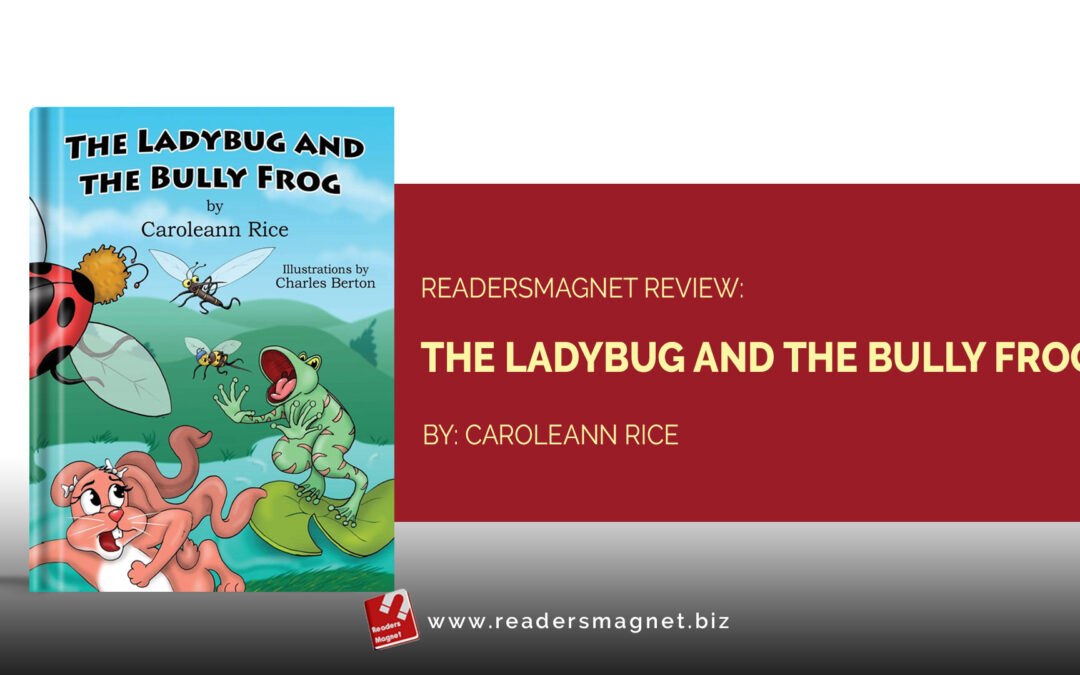 ReadersMagnet takes a close look at Caroleann Rice’s second book from her Solomon the Snail series.

Caroleann Rice is known for her children’s book stories featuring animal characters. So far, she has published three children’s illustrated books, and each one features the character of Solon, the Snail. Solomon is wise, and the other animals always seek his advice. Today, we will feature the second installment of the Solomon the Snail series. Although this Ladybug children’s book by Caroleann Rice features Solomon and his gift of wisdom, the second book features another important character.

The Ladybug and the Bull Frog

The Ladybug And The Bully Frog is a 2018 children’s illustrated by Caroleann Rice. It is the second book to feature the character of Solomon, the Snail. However, in this book, Caroleann Rice writes about another important character, a ladybug named Dot.

In the book The Ladybug And the Bully Frog, we are introduced to a community of animals living in the pond. All the resident animals share the pond. Everyone is friends with everybody. However, the peace and quiet of the pond are interrupted with the arrival of Milton the Frog. Milton is known to many as a mean bullfrog. The animals are helpless and decide to seek help. Clover the Rabbit races to seek help from Mrs.Ladybug for help one day. Mrs. Ladybug is known as “Dot” is a friend to everyone, and the animals always seek her help whenever a problem arises.

Clover narrated to Ladybug Dot what transpired in the pond, and the other animals fear Milton’s mean character. The animals also think that the only way to stop Milton is to seek Solomon, the Snail. But to do that, they need someone who can fly over Milton and face him by bringing the wisdom of the Mighty Wondrous Voice of Love. The Mighty Wondrous Voice of Love is Solomon the Snail’s secret weapon and friend. Among all the animals in the community, only Dot can soar above the bully frog and seek out Solomon. They rely on her to end Milton’s meanness and reclaim the pond for everyone to enjoy. But will Dot do it? Can she do it on her own? Only the ladybug can answer these questions.

Just like Caroleann Rice’s other children’s books, The Ladybug and the Bully Frog is rich in lessons and moral values. The book emphasized the importance of fellowship, acceptance, and kindness to one another. One highlight of the books focused on the peaceful means to resolve conflicts. Other values featured in the book are patience, tolerance, and love.

Season artist and illustrator Charles Berton did the illustrations for Ladybug and the Bully Frog. His other well-known projects include Mother Nature’s Gifts, Kitty Cat and Rotten Rat, Meeting My Brother, and the latest book by Coleen Perrone about the coronavirus pandemic- Children Are Heroes, Too.

Other Books by Caroleann Rice

The Song of Solomon the Snail

The Song of Solomon the Snail is the first book to feature the character of Solomon, the friendly snail whom the other animals seek for wisdom and advice. In this book, Caroleann Rice introduced us to the main character, Solomon and his friend Mighty Wondrous Voice of Love (God), and the other animals.

Solomon Snail Goes to the Beach

Solomon Snail Goes to the Beach is the third book by Caroleann Rice. The latest book from Caroleann Rice features the Crabby Shack owned by brothers Buster Crab and Sandy. Their customers are bothered by pesky Buzz Seagull and his brother Speedy. They seek the help of Solomon the Snail and a character named Old Bill.

To know more about Caroleann Rice and her children’s books, buy a copy or visit her website today.