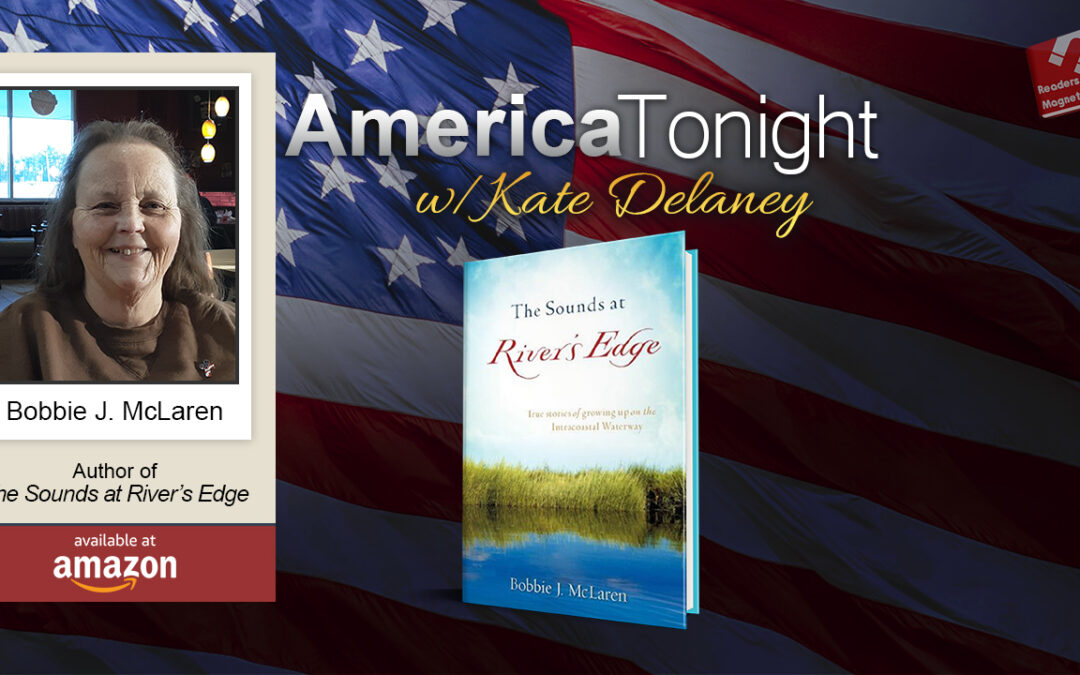 Bobbie J. McLaren grew up in South Florida but currently resides in North East Alabama. She writes vacation Bible school programs for her church. Her interests in the arts include drama, painting, and sketch. Her book The Sounds at River’s Edge takes readers back to the time when “entertainment wasn’t where you go or how much money you spent, but what you did. Playing outside was the normal thing for most children. In fact, to stay “in the house” was sheer punishment.”

Bobbie shared with her host the inspiration for writing The Sounds at River’s Edge. “The world is so different now. At my age, you have children and grandchildren. Many people are even already great-grandparents. The stories about our lives growing up, the new generation will never experience. They’ll never know. My dad had always said, ‘Unless you’re famous or infamous, a hundred years from now, people won’t even remember that you existed.’ That’s really profound.

“My dad had passed away in 1994. My sister and my best friend had pushed me and said, ‘You can. You did the craziest stuff. You should write it down; then you can leave (behind) a legacy that people a hundred years from now, whether you remember or not, the stories will be.’ And I thought, ‘People need to remember their worse or simpler times.’

“I read Laura Ingalls Wilder’s Little House on the Prairie, and I was like, ‘Thank God for microwave. Thank God for hot water.’ Everybody was like, ‘It was such simpler times.’ Simpler, yes, but it was not as convenient as what I am spoiled to now.

“That was the premise and the platform to where the book came about, so I sat down and wrote the stories and read them to my mother. I said, ‘Mom, do you remember these?’ and she said, ‘Oh my gosh, yes.’ I just want to make sure they were really true. I then went to my sister and some of the other people involved.”

Growing up in Florida

“I love gators,” Bobbie told Kate, who has a fear of gators. “If I could tame one, I could have one. But my cats and my other animals would be their lunch, so I don’t have one.”

“A lot of people think a canal was being something small, but you have to debate that with the people that lived near the Erie Canal because it’s not small. Everything we did was based around water and outdoors.”

The love of a father

In The Sounds at River’s Edge, Bobbie shares stories about her father. She said about him, “My dad must be some kind of a little hellion when he was young because he tolerated so much with us. He was so patient, and that I think it only comes to experiences of being. You just don’t develop that. You actually grow with that kind of understanding of relationships.

“I would like people to understand that a lot of children grow up in homes where they don’t really have a close relationship with their fathers. I was fortunate to where I can actually say my dad was my best friend. The things that I thought he was really stupid and dumber than dirt when I was young. As I grew older, I realized he was probably the smartest man I ever knew.”

Relieve the joys of the past in Bobbie J. McLaren’sThe Sounds at River’s Edge. Available on Amazonhttps://www.amazon.com/Sounds-At-Rivers-Edge/dp/1604771429