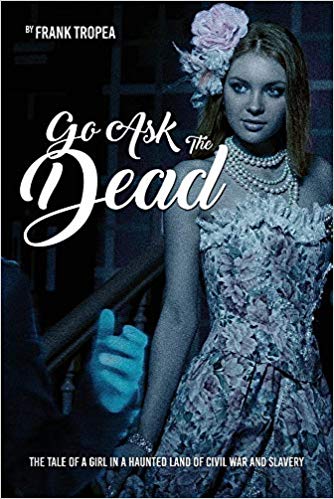 Once in a while, amidst the herd of self-published sci-fi and high fantasy novels, someone gets to offer readers a paranormal suspense novel that is both haunting yet could pass for a light read. This year, Frank Tropea’s Go Ask the Dead is ReadersMagnet’s dark horse worth keeping.

A ghost novel as dark and haunting as the American Civil War.

Go Ask the Dead is a story about a beautiful young woman named Amanda Mannon. Amanda’s family background is haunted. Her morally loose mother was murdered. Amada, too, survived her stepfather’s murder attempt. Because of these tragic events of her past, Amanda came to live with her very wealthy great-aunt, Lavinia Mannon. Amanda also has another dark secret- she can see and interact with the dead. Eventually, she developed a relationship with the ghost of a Confederate officer. William met his death a long time ago at Gettysburg. Because Amanda is also seen by other ghosts, particularly William’s soldier cohorts, she becomes the object of their affection. She then suffered sexual abuses from these soldier ghosts. Amanda seeks the help of her ex-husband, Craig. While battling the supernatural forces, Amanda realizes that she is pregnant. She then gives birth to a son. Go Ask the Dead is a surprisingly chilling modern paranormal thriller with a twist of American Civil War history.

Sure, Go Ask the Dead is not the first paranormal-suspense novel to tap into the vast darkness of America’s war history, particularly the Civil War. However, only a few writers are able to create a clear relationship between the present haunting and the figurative ghosts of the past. Frank Tropea’s Go Ask the Dead even has both. William and his cohorts are not only a haunting ghost, but they also represent the ghosts and horrors of the American Civil War. Another interesting aspect of the novel is the psychic background of Amanda Mannon. Author Frank Tropea successfully incorporates his own expertise in the field of paranormal activities. Frank Tropea is not only a paranormal enthusiast but he also studied ghost hauntings, poltergeist activities, and the likes.

Frank Tropea’s long history with paranormal studies, allowed him to create a suspense narrative filled with details. Couple with the historical aspect of the novel, Go Ask the Dead offers a remarkably thrilling read from page to page. The sensual scenes and the romantic dialogues in the book served as beautiful distractions in between the tragic sections of Frank Tropea’s dark and grim material.

Overall, Go Ask the Dead is a scary read with a fresh writing style and elements that only Frank Tropea can conjure into a masterpiece. ReadersMagnet Review recommends Go Ask the Dead to suspense-thriller fans who want a different kind of scare.

Note: Go Ask the Dead is published by ReadersMagnet. ReadersMagnet is a self-publishing company that offers publishing and marketing services. They also provide book review services and book promotion services.