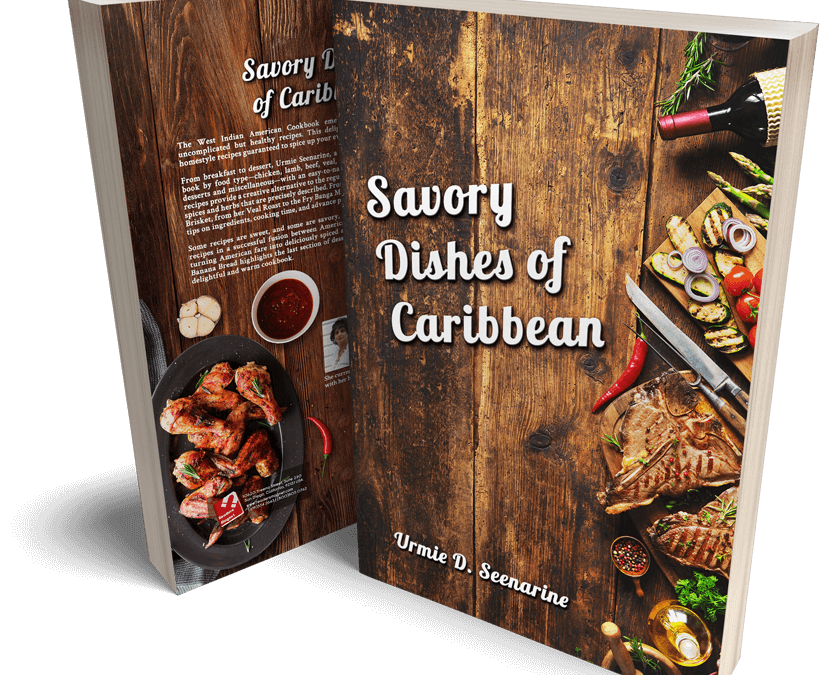 Good recipes are those made for family and handed from generation to generation becoming part of a community’s traditional food. However, the greatest of dishes are those that are able to transcend culture and find their way into foreign homes.

Urmie Seenarine’s passion for cooking started at an early age. Her father, B. Ramotar was the village’s unofficial chef. It was him who introduce Urmie how to use exotic ingredients. It was through her father’s mentorship that she developed a talent for mixing spices. One striking feature of Chef Urmie Seenarine’s Savory Dishes of Caribbean is that she begins by writing about various herbs and spices, both common and unfamiliar. There is sincerity in wanting to share to both green and seasoned chefs about the world of herbs and spices. She took time to write briefly about each spice or herb which is remarkable as most cookbooks selfdom a lot a page or two about leaves and powders. Indeed, Urmie Seenarine is her father’s daughter.

A Guyanese Cook in New York

The main attraction of Urmie Seenarine’s cookbook is that each recipe is seemingly uniquely her own. The book is divided into seven chapters- chicken, lamb, beef, veal, pork, turkey, fish and shrimp, and desserts. Although most of the recipes are found in other cookbooks, what Chef Urmie Seenarine does is she transforms some of these popular cuisines by adding her own Guyanese magic into these dishes.

Whether it’s fresh thyme stems in Pineapple Chicken, masala or geerah in curry, cassareep and shallot in beef chow mein, or her own version of a baked turkey, Chef Urmie put a new twist with every dish. Her time in New York has afforded her to perfectly fuse in her Guyanese influence into common American cuisine. And she does it without changing much of the recipe. Another pleasant feature of the cookbook is its line-up of fish and shrimp dishes. Without fanfare, Chef Urmie invites readers to try exotic cuisines such as the Curry Hassa (West Indian fish), Curry Gilbakar, Curry Catfish, Urmie’s own versions of Fry Banga Mary, Gray Sole fillet, Flounder fillet, and a variety of shrimp dishes. Surprisingly, Savory Dishes of Caribbean also features a number of easy to prepare desserts. A couple of duck recipes completes Chef Urmie Seenarine’s masterful work.

Savory Dishes of Caribbean is a culmination of Chef Urmie Seenarine’s journey from her childhood native village in Guyana to her very own household in Richmond Hill, New York. She writes each recipe in a way that it affords readers certain familiarity and yet a tinge of excitement for each new twist she conjures. Cookbooks seldom tell narrative but Chef Urmie Seenarine does this by introducing herbs and spices that are not commonly used in everyday cooking. The Guyanese recipes featured in this books speak so much of the author’s background and origin. It’s a signature that is uniquely Seenarine’s.

Good recipes preserve collectively by a community or a nation and they survive generations. Great recipes are those that transcend culture creating fusion and harmony, making every day cooking exciting. At the very least, that is what Savory Dishes of Caribbean is all about. ReadersMagnet Reviews highly recommends this book.

Note: Savory Dishes of the Caribbean is published by ReadersMagnet. ReadersMagnet is a self-publishing company that offers publishing and marketing services. They also provide book review services and book promotion services.