What Do You Get from Reading Science-Fiction? 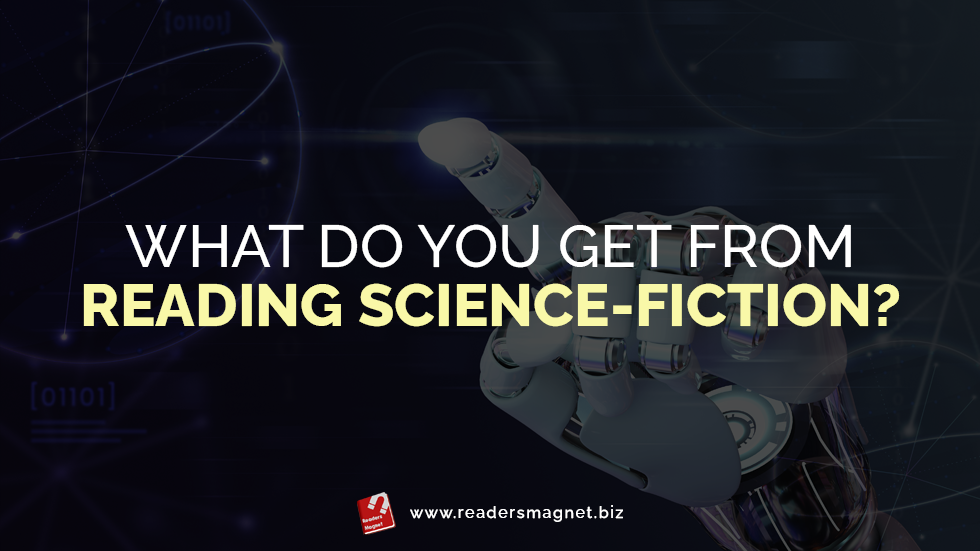 With it becoming more and more popular, what do people benefit from consuming science-fiction?

Reading novels is proven to cause a significant increase in brain connectivity. Fiction, especially, is an excellent source of such activity. Reading fiction helps people’s brains connect events, thoughts, and details much better in comparison to other genres. However, among all fictional genres, science-fiction receives a bad reputation.

Those who read science-fiction are commonly stereotyped as geeks who can’t cope with reality or those who are too afraid of the reality that they choose to hide behind a fictional world. However, an article in Social and Personal Psychology disproved this stereotype by saying that the ability to perceive different worlds involves dual empathy, making them able not just to cope but also connect to these worlds.

With its polarizing nature, the debate surrounding its effect – whether positive or adverse – on its audience is still continuing. A part of the population believes science-fiction doesn’t offer much to its readers but escapism. In contrast, the other believes there are multiple benefits in reading science-fiction beyond just escapism or entertainment.

Admittedly, science-fiction does provide its readers an opportunity to escape reality. In fact, any fictional material offers its readers a chance to escape, whether to a dystopian future or to a place that doesn’t necessarily exist. But other than escapism, it also has a valuable role in helping its readers deal with the present.

With its theme centering around the future possibilities, science-fiction encourages people to use their imaginations and anticipate what the future holds for them. This cultivates a disposition where people are able to manage their lives despite difficulties.

Most science-fiction novels or movies present possible ideas that don’t exist or happen in the present but may have chances to exist in the future. This fosters a community of debate and discussion about such ideas and the probabilities of them happening, and their possible resulting consequences. As a genre, science-fiction’s primary goal is to offer inventive predictions regarding what the future can hold for its audience.

However, other than the future of science and technology, science-fiction also takes on present issues and allows us to analyze them. For instance, the movie “Her” focuses on the effects of technology on people’s ability to form romantic relationships. This can then open a chance for its audience to further debate and ponder about this issue.

This genre delves into the what-ifs and possibilities of the future. Thus, science-fiction can make readers more interested in the world. The more people expose themselves to these concepts, the more they can visualize this world and explore its possibilities. Besides an individual’s personal life, science-fiction can also affect specific sectors of society. With people becoming more curious and creative, technological and scientific advancements can be achieved easier.

The world is slowly progressively becoming more integrated with science and technology. By consuming science-fiction materials, people can be more interested in these matters and have a better understanding of scientific ideas and concepts. These materials become better means of learning and understanding science in general, thus encouraging students to purpose careers in related fields and positively affecting the involved sectors.

It allows you to think outside the box

In the book written by Benoit Blanchard about a device called cyber – a supposed technology to stifle criminal thought by people – people are introduced to a possible idea of how technology can help the modern world control and prevent criminal behavior. Since science-fiction’s theme typically centers around advancements in technology, people are presented with ideas that they might not be able to come up with now due to the limitations in the present technology.